I am using MSI R9 380 4GB and i am having some severe FPS issues in GPU-intensive games like ARK: Survival Evolved.
My PSU is 750W Seasonic SS-750AM2 and two separate 6pin cables are leading from the PSU to the GPU.
At first i thought it was normal since that game is demanding, but then i saw that people with weaker GPUs (and overall PCs) are getting much better frames on higher graphic qualities.

So i did the toughest Furmark 1.17 stress testing (stress test over an hour on maximum settings at 1080p).
That most difficult test got my FPS down to 25, my GPU temperature to 72 celsius and my GPU's maximum (highest peak) power consumption to barely 140 watts.
At the same time i kept GPU-Z and HWMonitor active as well, and they recorded the same 138-140 watts maximum power consumption.
As far as i could see my GPU was under maximum load, the FPS in Furmark was at barely 25 and GPU load was stated to be at 100%.

In my most GPU intensive game Ark Survival in the Radeon Universal Overdrive it says my GPU is 100% active, the GPU clock is 980MHz and my Memory clock is 1425MHz.
It also states my temperature is at 65 celsius and my cooler is at 30%.
GPU-Z claims my GPU is consuming barely over 102 watts while having 15 FPS in ARK.

Various websites, articles and youtube videos show the same GPU model as mine go up as high as 200+ watts under maximum load (both in games and stress tests/benchmarks).
The MSI official website shows my model of GPU to go up to 190 watts without any specific overclocking.
I am just a tech amateur, but something seems very wrong when my GPU is under-performing and is seemingly using a small amount of power compared to other GPUs of the same model.

I took a look at the inside of my PC, the GPU seems properly inserted into the MBoard and the two separate 6pin cables from the PSU (750W Seasonic SS-750AM2) are firmly plugged into my GPU's two power jacks.
The GPU and the whole PC is clear of dust so that is not an issue, and software-wise i am using the latest AMD drivers and all Windows 7 updates and my startup programs are at a bare minimum (anti-virus paused during the tests).

I got no clue what is going on... looks like my GPU is unable (or refusing) to draw more power from the PSU?
Can anyone please help me?

What driver versions have you tried?
OP
B

ATMINSIDE said:
What driver versions have you tried?
Click to expand...

I got this GPU about 6 months ago.
So in the last 6 months every time a new stable AMD driver came out i updated to it.

This problem has always been present (in the last 6 months) in a GPU intensive game like ARK Survival, but i never thought it could be a problem with the GPU.
However after i found out that people with weaker GPUs/PCs get much better FPS i started investigating.

Have you tried the GPU in another system and/or another GPU in your system?
Tried it in another PCIe slot?

Can you post screenshots of the following CPUz tabs?
- CPU
- Memory
- SPD
OP
B

ATMINSIDE said:
Have you tried the GPU in another system and/or another GPU in your system?
Tried it in another PCIe slot?
Can you post screenshots of the following CPUz tabs?
- CPU
- Memory
- SPD
Click to expand...

I do not have another system or another GPU to do such tests.
I did not try my GPU in a different PCIe slot, but only my first (current) PCIe slot is X16... the second PCIe slot is X8, so i do not know is it a valid test?

Here are the requested screenshots in a single image, along with some other info from Speccy and GPU-Z: 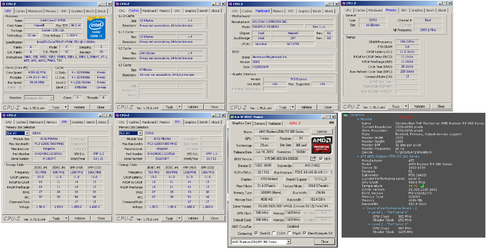 First, your RAM is running very slow, set it to XMP.
Second, does the Bus Interface in GPUz change when the GPU is loaded?
OP
B

I will make the RAM change you suggested.

Good on the PCIe, let me know if the RAM change helps any.
You must log in or register to reply here.