peanutbudder said:
I'm so damn jelly right now you could spread me on toast.
Click to expand...

MIAHALLEN said:
Far from perfect....but thats I just do what I can with what I have
I wish I had a shop and proper tools....but at the same time, it could be much worse
Click to expand...

Wow, not having a dedicated wood shop makes this build even more impressive in my personal opinion.

I love the carpeting as well. It adds a really nice finished look to it.
OP

Day 5
Today I finished the right wall, the shifter plate, and the front wall where the pedal plate will be braced. 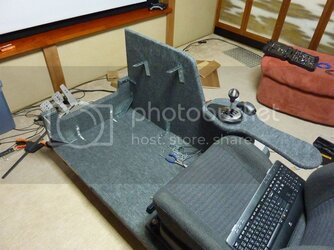 I mounted two shaker pucks below the shifter. 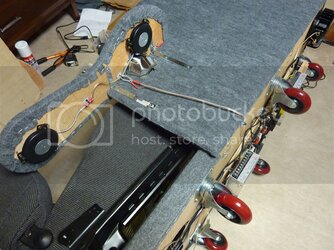 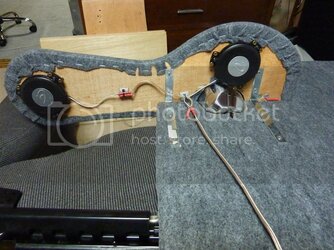 But during testing today, these two pucks would not respond. So I'll have to figure that out later.

Day 6
Alright, I finished up the rest of the pieces today, carpeting went pretty well while I was using the 3M 77 glue, but then I switched to a different on that is like stringy spray. Its a darker orange color and it made a mess with overspray, yellowing the carpet. It also didn't work as well in general. Read this is a simple endorsement for 3M 77.

The pedal plate is at approx a 30 degree angle. 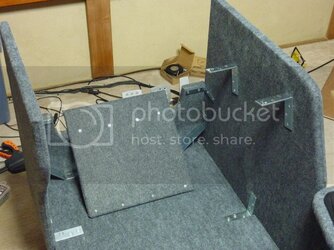 The pedal faces end up being almost vertical. 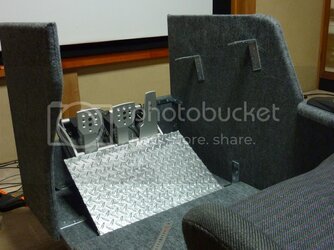 As you can see above, I also reshaped the left wall to allow for easier egress.
With the wheel plate and top plate installed, the final result looks quite nice. 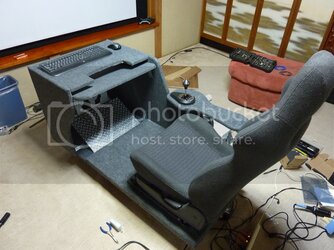 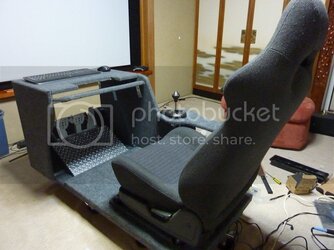 My backup wheel is the old 360 wheel...which is horrible next to my CSR-E, but it will have to suffice for the next couple weeks while I wait for my replacement from Fanatec. 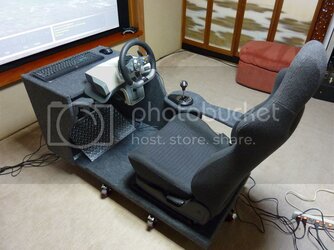 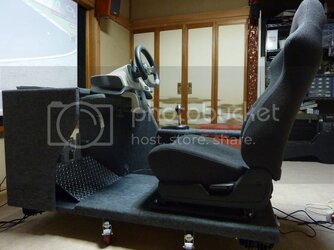 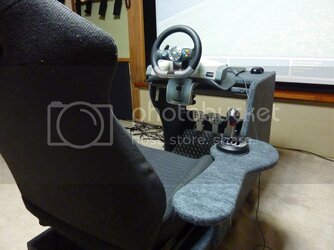 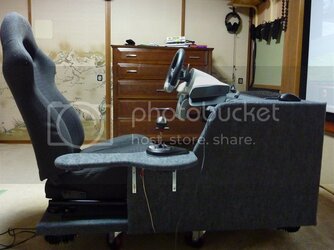 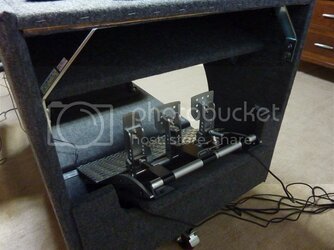 I did more testing today, and it appears one of the amps from parts-express has two dead channels. So, my pedal plate shakers, and shifter shakers are not working yet. But they'll be ready to go once I replace the amp. 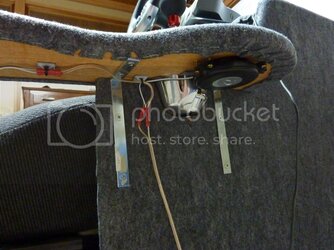 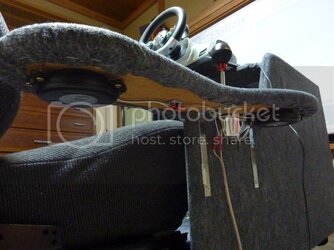 Now I'm working on tuning the SimVibe software, so far pretty good, although I'm not convinced my from shakers are mounted in the best way, the four in the rear kick butt....literally.
D

Awesome job man! some really awesome work you have done. SSJWizard turned me on to your forums, glad he did. What branch of military were you? I take it you are out now though? I was USMC and spent a while at Camp Hansen and partied out in Kinville a lot. $20 skivvy houses ring a bell? lol

Fronting as a Mod Member

I kind of doubt you'd find Miah at a place of ill repute.
OP

@ DeGho...I was Army, stationed at Camp Zama near Tokyo. I got out in '09 and now work for Lockheed Martin in northern Japan.
D

Awesome bro, congrats. Glad to see our servicemen doing great things after their tour is over. And as far as ill repute goes, those places had the best sake on the island. And nobody twists your, er, arm to go upstairs lol.

I retired, not as much willingly as a necessity last year. I just play games and raise dogs now. Trying to talk myself in to getting in to modding in different avenues. Water cooling, creation of new devices to make my life easier/making a current item better, etc. Maybe one day, till then I will watch you and SSJWizard do some really cool stuff.

Looking forward to seeing ya do more great things in the PC community too.

I've been around for a bit....check the links in my sig for details

Flames up the side are needed.

Then it will be finished
OP

My CSR-E was #20 off the assembly line and has performed very well. A few minor issues with it bothered me, but nothing serious enough to warrant an RMA....except for the smell of burn motor when he FFB was up to high. It didn't bother me much because at first I thought it was only a problem with F1 2011. Later when I turned up my FFB settings in iRacing, I found the smell appeared there as well. It never affected the function of the wheel....so I waited until I left for Christmas vacation last month to ship it to the Fanatec service center in Arizona. They checked out the wheel and reported that it needed to be replaced. The good news is that Fanatec is allowing me to pay the difference to upgrade to the Clubsport wheel, which I'm pretty excited about
D

How do the seat shakers get interfaced with the game?
OP

Check the SimVibe link in the OP. Telemetry output from the game goes to the SimVibe software, which runs to two extra soundcards, which feeds the amps under my rig

You have some time on your hands, nice to have the skills to utilize it for a Worthy Cause.

I'm a huge 3D Vision fan. I've been gaming on my 100" Acer projector for about a year now, and I love it. But the resolution sucks! 720p is just not enough, especially on such a large screen.

The largest size 1080p screen which supports 3D Vision in 1080p is 27". I was hoping that would change and something would be announced this year at CES, but my hopes were dashed to the rocks....and we are still stuck with the 27" limitation.

Its still a large investment, but I think it will be worth it. I'll be running them with two MSI Lightning Extreme 3GB GTX580 graphics cards in SLI (water cooled)....they should have plenty of power for the configuration, I'll also have a standard 580 for PhysX and additional screens.
D

How do you make 3d work with multiple monitors?
C

I'm looking to make one myself, but much simpler lol, more like this,

but still not quite, but they have the surround sound setup I'm looking for, but mine will be flatter, and it will have an ashtray plate, cup holder, and a center counsel, along with a mouse pad, and I'm going to make a TV holder right behind the steering wheel, I'll be sitting more like an F1 racer more or less I think. Won't be as extravagant as yours, it will be simple metal piping for a frame and what not. I'm planning on using the G27 also
OP

Dropkinn said:
How do you make 3d work with multiple monitors?
Click to expand...

@cdyoung1985...nice setup, but speaker placement is horrible, and while the G27 is OK for some, the pedals are woefully inadaquate for a serious sim racer. But they provide a decent starting point. Good luck with your rig. You should start a thread and allow others to follow your progress

@cdyoung1985...nice setup, but speaker placement is horrible, and while the G27 is OK for some, the pedals are woefully inadaquate for a serious sim racer. But they provide a decent starting point. Good luck with your rig. You should start a thread and allow others to follow your progress

I will once I get my taxes and start building it. That's not my design, just aw that on Google images when looking for some ideas, not a speaker genius, I probably would put them like that, but I'm no expert at anything really, I just fake my way through lol. I'm not a true die hard sim racer, I like the realistic NFS games, and the Gran Turismo games, and just want it to be more realistic, I also LOVE a good off road game, though there have been VERY few that were at all decent, wish I could make the system rock around on hydraulics, but that puts it a little out of price range, being that I'm hoping to spend around $100 on the set up, not counting the wheel, just the seat, mounts, and frame, and the hydraulic system I saw was selling for $45k lol
OP

Jeez, I just read my comment again....I was a bit harsh, sorry. I wasn't trying to squash your ideas...it looks a million times better than many 1st time rigs, better than mine was for sure I'm getting to be a bit of a rig snob hanging out over at the iRacing forums LOL. Don't let me spoil your plans, while I doubt you'll be able to just do what you've listed and be happy (this becomes addictive ), I think it looks like a great start