Two of my favorite pastimes, racing and gaming, brought together in the most epic of fashions. To say I'm jealous would be a severe understatement
C

MIAHALLEN said:
Jeez, I just read my comment again....I was a bit harsh, sorry. I wasn't trying to squash your ideas...it looks a million times better than many 1st time rigs, better than mine was for sure I'm getting to be a bit of a rig snob hanging out over at the iRacing forums LOL. Don't let me spoil your plans, while I doubt you'll be able to just do what you've listed and be happy (this becomes addictive ), I think it looks like a great start

It's fine, not like you out and called me a moron or anything lol. You know what it takes, I don't, yet, but I'm sure I will redo it in a few years, if that long, wouldn't be surprised if I change things after a few months, because that's when things will start annoying me, or I'll wish I had this or that lol. My rig won't look as good as the one I posted, at least not this build, once I get out of school and can weld, or if they'll let me weld my own projects at school using their welders, then I'll be able to make it much better, but having no bender, welder, anything, it's going to have to be a cheap ****ty looking things. Come April or so I'm moving to Ohio for an in depth performance motorsports course, and I'm hoping they'll let me use their fabrication tools while I'm there to make something awesome.

I really like your idea for the actual center counsel, I'm half tempted to rip one out of a junk yard lol. But I'm nowhere near that point, I'm at the brainstorming point, where I think about what I'll want if I'm going to sit in this thing for 8+ hrs racing my *** off, thinking a mini fridge right next to it is a must also

Also hoping my new computer build will allow me to run 3 HDTV's in panoramic, that would be friggin amazing, but I don't know if the HD 7870 will run it, might have to turn graphics down, but then again, if I'm going to drop the cash on 3 tv's, I'll probably drop the extra money to get the 7950 or 7970, or equivalent of the Nvidia, don't really care which brand, as long as the cost for performance is better... This is still going to be a budget Comp build, but it's not a really tight budget, looking at about $800-900 or so, but that's in another thread
OP

I'm getting bored waiting for my new wheel and monitors to arrive, so I'm working on some of the details of my rig. Today I made a mouse pad ;D

It started life as a SteelSeries QcK+ Gaming Mouse Pad....but I made short work of that. 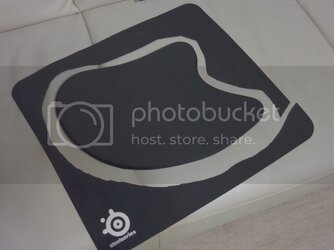 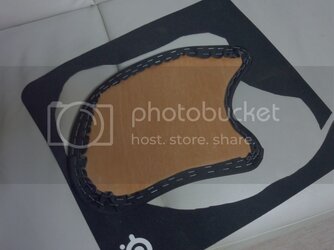 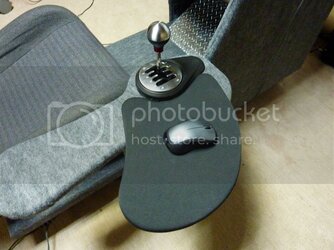 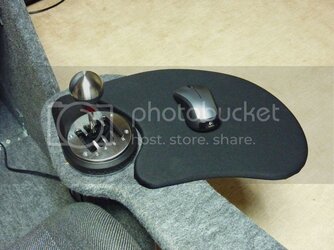 The size and position is perfect.
OP

I've discoved a problem with using two Asus soundcards together. The driver control software is not setup to handle two soundcards simultaniously. When I open the software, it just acts as if there is only one card present. This is a problem because even when setting the Windows properties to "quadrophonic", the driver default for these soundcards is 2-speaker stereo...so it takes the Windows commands to send sound to the rear speakers and redirects it to the front speakers.

This seems to have solves the issue somewhat, but I'm still getting inconsistent results. I thought for a while the amp was bad, but I think the problem is attempting to run two of these cards in one system. So I've sent back one of the DXGs and I've ordered a cheap VIA Envy based card to replace it.

No I'm just even more jealous than before. Awesome build!
OP

A few updates here. I figured out the SimVibe "audio" problem. It was not an Asus soundcard incompatibility issue, one of my amps only has 2 working channels. So I'm working on getting that replaced. Right now I have the 4 shakers in the corners running in chassis mode, and I have the two shakers mounted on the seat. The pucks on my pedal plate & shifter will not be working until I get the amp replaced.

Today I decided to reconfigure my shakers. After a couple weeks experience, I found that the two shakers in front were not very effective as placed. They were fighting too much rigid structure vertically, so I pushed the front casters out to the corners and moved the shakers to the middle. The one on the left is much better now, the one on the right is still fighting a lot of vertical structure (the shifter mount), and so its vibrations are still pretty muted. I've still got some more ideas to fix this, but I'm going to run it like this for a while to see how I like it over some more time. 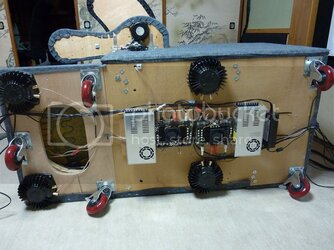 I also found the four shakers under the rear were overkill, and the three separate channels were getting muddled together. I decided the two corner shakers were enough for vertical vibrations, and decided to mount the seat shakers to the rear of the seat for horizontal vibrations....BEST DECISION I'VE MADE...its almost like adding SimVibe to a non-SimVibe rig...it just notches it up to the next level! 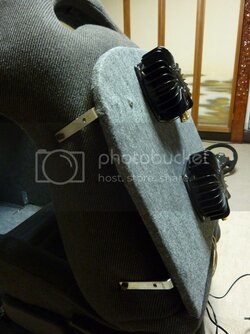 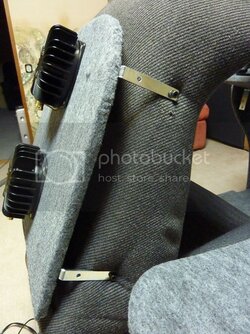 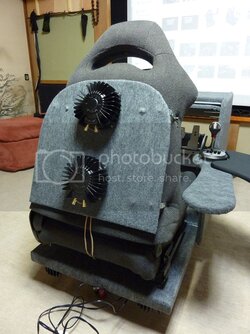 The combination of vertical and horizontal vibrations is intense! Before, disabling the chassis mode (all vibration) was a night and day difference, after racing with SimVibe, you cannot race without. In the same way, if I now disable the horizontal effect and run with only vertical effects, its a similar change, it feels a bit lifeless. This setup is killer!

I decided to use the same strategy for my shifter pucks. The one in the rear kept vibrating with the motion of the center console, and it was making a lot of noise. So I've rearranged it as well. 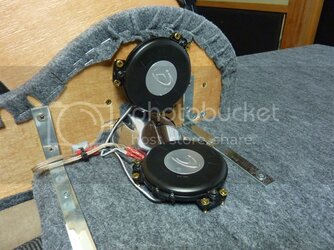 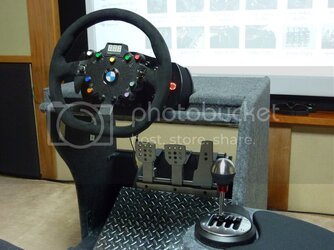 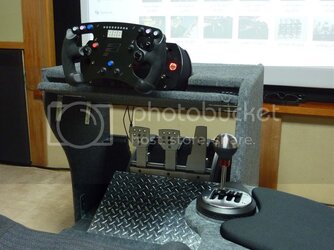 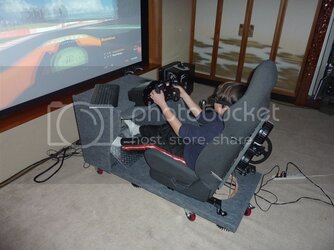 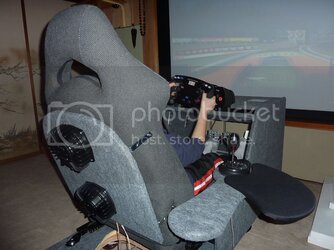 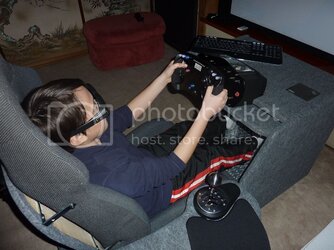 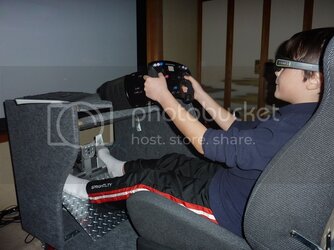 I am still waiting on my new triple monitor stand +3 Asus VG278HE 3D Vision monitors to arrive. Then I should be posting another update
D

Its the new Fanatec ClubSport Wheel, it has a quick release system to allow the rim to be swapped out on the fly. I have the only two rims currently available, but there should be even more rims made for it in the future.

Awesome rig Miah. Cool use of the shakers - tested some Earthquake shakers out at CES while watching a movie, made me definitely want some for the media room I imagine having one day. The response makes things feel more lively, and I felt it makes the audio better without turning the dial up as far as well.
OP

Absolutely Matt....that's how I got started with them as well. I put one in my couch
They add SO much!

Your mods are always awesome. And Just what I was expecting from a thread with your signature. Congratulations on a job well done. Sub'd.
OP

Well, I've gotten all three of my new monitors, and while I can still see a little cross-talk...I've been able to dial out enough that I think I'll be OK with their 3D performance. I still have not received my triple monitor mount. I went for the January promo at fasttracksims.com for $269.99...It seems like a great mount, and I'm looking forward to getting it setup. I also ordered one of their keyboard mounts. However, they've been a little behind production, so I'm still waiting.

In the mean time, I cut a couple wood "wings" to put the monitors on. They seem to be working fairly well for now. 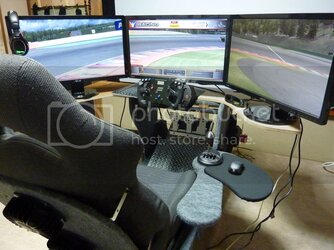 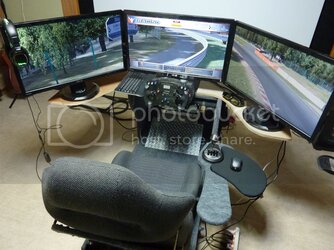 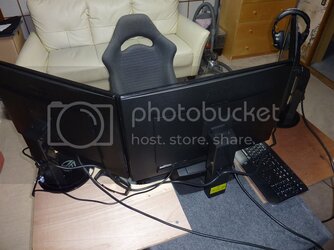 I also got two 3GB MSI Lightning 580 GTX Extreme Edition cards to replace two of my reference 580s. They'll run the triples, and the leftover 580 will run my projector and desktop monitor. I got them plumbed into my water cooling loop, and they're running nice and cool 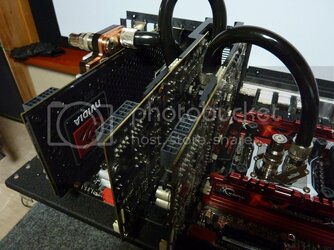 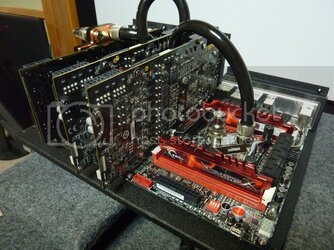 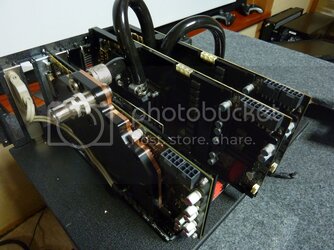 Why are you not running Quad Channel?
OP

I was, but pulled two sticks for a system I have up for sale (in the classifieds), I'll replace them the next time there is a good sale on them I should have grabbed more on Black Friday

I know so many have already said it and I am saying it again. WOW! An awesome set up for your racing ga...err sim.

When I first read the title, my initial thought was literally building a computer rig and racing it with other computer rigs? I then thought, NAH! there's no way he's means that. Which, of course, led me to read this thread to make sure that this is not what you are doing. I had to see to make sure because I've seen some, imo, some crazy concepts that people have tried with modding their rigs. One guy bought an AC unit just to cool down his rig. Where do you people come up with these ideas?!

Even though I am not an overclocker, yet, I love coming to these forums for threads exactly like yours, even that AC guy. Thinking outside of the box and the DIY mentality to create something that you need (and I am pretty sure if you were to market your racing rig, you'd have more than a few buyers, just a thought), to improve your life/hobby/etc...

Keep up the good work and I'm definitely looking through some of your other threads/work.

Ill build something similar as soon as i move back into an house, currently renting a 5 1/2 room place and i dont have a left over room for this kind of setup. I alreayd have my car seat and many other things like woofer speaker and parts to make the seat shake tha house

Great work You gave me a few idea for the project.
OP

Bustos said:
When I first read the title, my initial thought was literally building a computer rig and racing it with other computer rigs? I then thought, NAH! there's no way he's means that.
Click to expand...

Why not? That's what I used to do

Not with air conditioners though, in competition, overclockers typically use liquid nitrogen

Oh me oh my. It sure is coming along nicely!

Are you gong to debezel those monitors?
OP

Not planning on it as of now. But who knows, I've gone extreme in the past
You must log in or register to reply here.