Hi all, need to pick some peoples brains if I can about what to do with my new build.

Aim.
To build something that will last a good few years, hoping for 4-5. It will be for gaming mostly, but also the hub of all my music, media, etc. More or less live on it at home, so 8 hours + a day. This will probably be my last big build before we decide if we're having kids or not, so I'm wanting to get a good water loop set up so that I can re-use components down the line, when I have no money to play with anymore. Also intend to expand the water loop to do the video card / cards at a later date.

Monitors.
Here comes the pain in the *** bit. Current set up is 6k effective resolution, 3 x 30" Dell U3011's which are 2560x1600. Now after 6 months of only having 2 working U3011's, I finally gave up on repairing my broken one and bought another off Ebay. It died after 1 day, so it's being refunded, but it leaves me in a tough spot. Do I keep trying to find used ones, when they are clearly reaching their used by date, or do I give up on them, keep my 2 as surrounds, and get a new centre screen? To be honest, I rarely actually gamed in surround as it was just too many pixels to drive well even with the 980 SLI set up. Something like Borderlands 2 was easy enough but heavily modded ENB Skyrim was 25-35 FPS outside. I mostly watch something on the right screen, play a game in the middle, then have browsing, steam chat, etc on the left. So I'm thinking of picking up an X34 Predator to use as centre screen and do all my gaming on that.

Either way I also have to build a new desk since this is too thin, see photo

Down the line, 2-3 years time, the PC will be in it's own cinema room so there will also be a 4k projector running off it, and probably a Vive at some point.

Peripherals & parts being re-used.
2 x Gigabyte GTX 980 (Once 1080 supply stabilises, will look at them, but probably wait for a single Ti, no more SLI), Samsung 840 Evo 1TB (games), 3 Internal HDD's, HX850 PSU (should be fine I hope?), Asus Xonar STX (My amp needs analogue signal to avoid an annoying popping issue), all the rest of my accessories.

Why the upgrade.
My i7 3770K is getting long in the tooth, even though I've recently formatted the whole thing is still slow. Time to build it is now while I have the coin, before I waste it on something else.

Rationale for the bits is as follows, but very open to suggestions.

Really not sure on this bit, since I've never custom cooled before. Hoping I have all I'd need in there, fittings wise? Planning on expanding it later with a 240 rad and water block for GPU, but won't be for a while. Also, is it worth splashing $9 each on black EK fittings, or do I save almost $50 and switch to https://www.pccasegear.com/products/22329/xspc-g1-4-black-chrome-7-16-compression-fitting these XSPC ones? Not sure it will work in a black / white themed build having chrome......... but $50 is a decent saving.

Sorry this is so long, but appreciate the help since this is a big *** purchase. 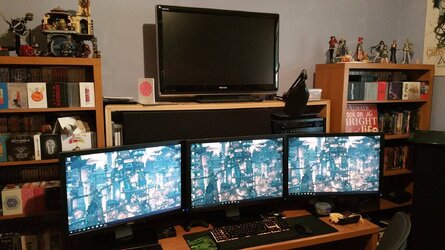 You got some top notch parts on that list for your new build! Everything listed is great. Only thing I would change is that 240 Rad to a 360. It would be more than enough to cool the 1080 & the 6850K.

Add some distilled water with PTH-Nuke/Silver Kill Koil and you're golden. It's going to be one heck of a build for sure!

Cheers Nebulous, just hoping I don't ruin anything in the build.

I'm kind of thinking about doing a temp build in my current case till the Be Quiet Dark Base 900 or In Win 509 is out, so would I need to use the coolant in the first build, or would it survive a month or so without it?

Forget that coolant. Add the silver coil you listed along with the distilled water and it's a done deal. No need to use other coolants unless you're mixing metals.

Sure you can do the temp build until you get your new case. A gallon of distilled water will last quite sometime, plus you can reuse the silver coil.
OP

Coil ordered, will grab distilled water at the servo when the stuff is all together.

Should I be worried about the bios on the X99-Deluxe II running Broadwell out of the box? Occurred to me today that if it needs to be flashed, I'd have no CPU to do it :S.
You must log in or register to reply here.