Hey there. I have been trying to build a photoshop bang for the buck machine that would double as a media server and have finally come up with my latest rig. Sweetest thing about this rig is how fast it is relative to what it cost me. View the photos: 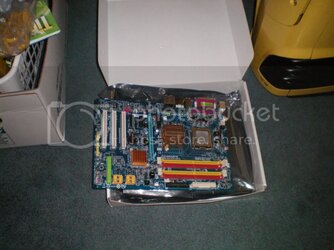 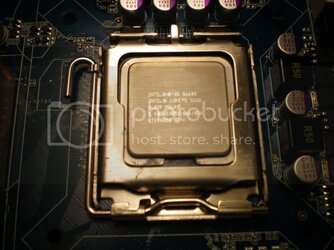 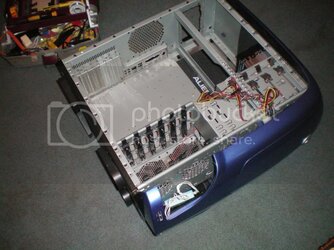 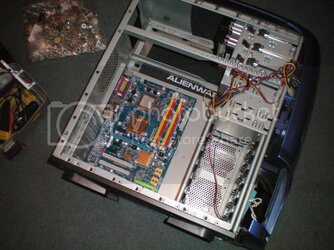 After installing CPU and then Motherboard/CPU in Tower 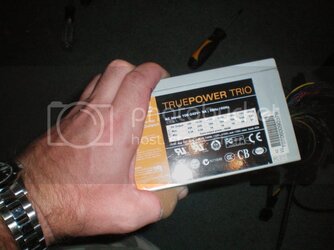 I have several PSU's onhand but all are somewhat Cheap. This Tripower550 will have to do till I install my KingWin Mach1. 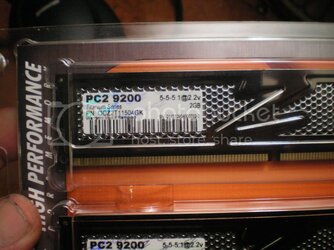 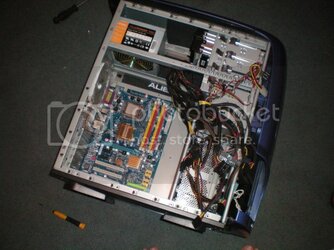 PSU isn't modular and it was a pain to untangle but almost there. 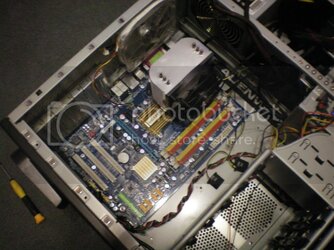 I have several Freezerpro7 on hand. Hope they and some AC5 do the job. 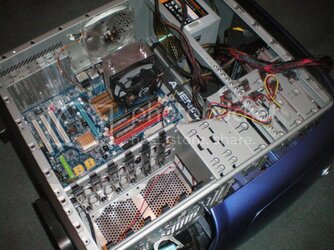 <BR>
I actually forgot that I had Ubuntu 9.0.4 on the HD and when I started to boot to the 7CD I got, I realized I could boot into Grub and was able to test immediatly. Oh, forgot to add, I put in a MSI HD2600 XT to drive video. I have several of these from a former job and they will do nicely for what I'm doing. I still have another to build in an Asus Vento case I have but I need more Ram and a CPU for the next one.

Update:
I have had this running since the 28th and installed 7 last evening. I ran the FSB up to 346 for a 3.1 OC and set the ram timing to 5-5-5-18. Alot of the other things in the bios are a little foreign to me my coretemp at idle sits at 38c and after a 2hr Prime95 I reached peak 68c. I only have 2 fans in the case, the HSF and a 120 behind the HS. I have some more and I'll be trying to add them to get the airflow up before pushing the OC any more. I would like to have it at 3.4 and run the memory as fast as possible. 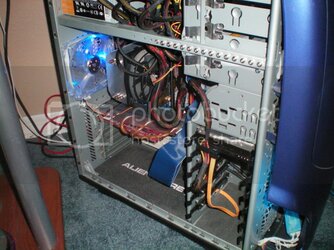 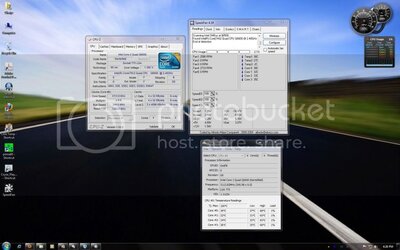 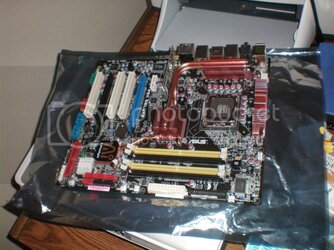 The P5K deluxe for the next quad 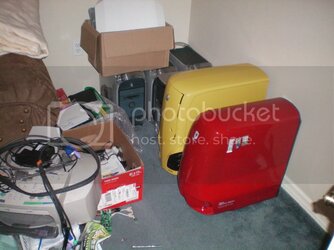 The Asus Vento for the next quad 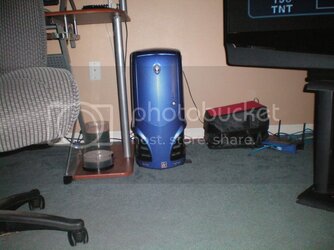 The new Quad up and running.
OP

Question, the ram timing says 5-5-5-18 on the OCZ site but the package says 5-5-5-1. I wish I could take a screenshot of the bios so someone could help me tweak the settings a little. 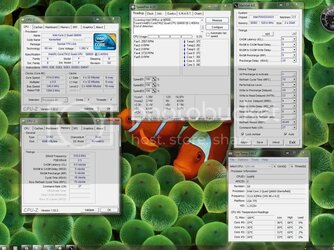 --the P5K you left derelict is the better board of the two.. especially if you want to OC. What's that other board a 4 phase? Bleh.

You did get a good price on everything, and you got a SLACR, which is apparently a good thing.

You cleaned that CPU heatspreader before you put the HS on right? It was dirty as hell.

I built the p35DS3l because the P5K deluxe didn't show up when I started. I already ordered another q6600 and as long as it shows up and is a slacr, it'll go in the Asus board. If it's a B3 stepping, I will pull the GO out of this one and replace it.
The P5K deluxe is for myself while I'm giving the Gigabyte machine to the other half. I'm still waiting on the 4870 though. I also don't have ram for it yet. Any suggestions on a good OC'ing ram for the P5K/q6600 combo?

Also, Yes, I used a q-tip and alcohol to clean the heat spreader on the CPU before I put it back in the board. The pic was how it shipped and I had to wipe off the CPU to verify it was in deed a SLACR. Anyway, it's apparently not the L lot version with the 1.25VID but I'm not trying to super power anything. I'd just like a very fast machine that runs rock solid and has no issues.

Anyway, still waiting to hear some suggestions on the OC for this combo. I did read the clocking guide and have speedstep disabled still and was planning to enable it once I get more in tune.
I did load Crysis on this machine and even with a 2600xt it runs at mainstream settings with antialiasing at 2x and isn't choppy at all.

Some of the posts are confusing about this combo and I'm just relying on the "Keep it under 70c under full load that I keep seeing".

BTW, total cost of both builds will wind up under $600. Not too shabby when you consider this machine is already faster than the XPS 700 quad 6600 she wanted to buy.

Ok, well I bumped the FSB again and am now running @3.22. I've not adjusted voltages manually at all, just FSB and timings in ram. I'm noticing that the ram is showing up as 538mhz in memset but don't know how to raise it to speed it up more. The ram is rated at [email protected] but it's out of my depth how to get it there, or even close. 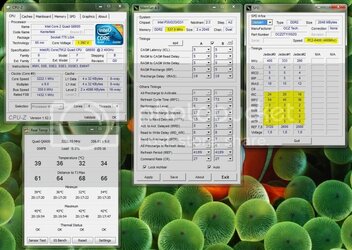 I'm running it in prime95 right now and it's already up to 66c. Time to start adding fans.

Looks Like a nice build . I have been wanting to build a media box for a long while .

Your temps look in like for a q6600 @ those clocks
You must log in or register to reply here.