I am working on an all over AIO mod with my MSI Airboost 56. I just wanted to let everyone know a a couple of things about taking the card apart if you decide to. On my card just about all the screws had some form of lock tight on them which made it very difficult to remove them without stripping the heads because of their small size. I also found that the memory and gpu dies are all higher then the surrounding frame. With the stock heatsink its not a problem because the mounting screws bottom out for the correct pressure from the heatsink.

If you decide to use any other custom cooling it would be extremely possible to crack the dies with too much pressure. I will be mounting an H55 Corsair AIO on mine, but will add to the border height with a CPU protected shim or thin copper strips attached to the border with artic alumina adhesive. I also found that the intel cpu mounting bracket that comes with the H55 will work with the card. I drilled 4 holes in it at 64mm square spacing and cut the excess off on each arm. I intend on using the stock back plate and mounting bracket. I enlarged the holes slightly on the bracket and flattened the bracket in a vise to be flat so there is no tension from it anymore. I had 4 nuts with attached springs from an old heatsink that I will use to attach to bolts that are permanently attached with nuts to the flat mounting bracket.

I have a Kraken G10 with the H55 on an overclocked R9 290x that works fantastic so with this card the H55 should work fine with the cooling. I do realize there is the Morpheus 2 for this card but decided not to get it because all that heat gets dumped into the case. It also limits the height of the heatsinks that can be used on the mosfets and chokes. With my Lian Li case I have a custom side panel that the radiator sits behind, so all the heat comes out the side panel. Nothing is attached to the side panel, the radiator is mounted to a modified fan bracket that attaches to the back of the case, so the radiator is positioned behind the side panel.

The mosfet cooling will be a 2mm thick copper strip with 1mm thermals pads that will attach to the board with small nuts, bolts and Artic Alumina adhesive (good stuff). That copper strip will give me some height to clear the other components, on that copper strip I will attach much lighter aluminum heatsinks using artic silver adhesive. I have done this on my R9 290x and it worked great for cooling the back of the mosfets.

One thing else I learned from past mods I have done is cooling directly behind the gpu. I used artic alumina adhesive all over as smooth as possible over all the components to cover them on the back of the card behind the gpu. Once that was dry I attached a copper slug and heatsink to the area again using artic alumina adhesive. That also worked pretty well with pulling off the heat on the back of the card.


Not much else I can explain until everything is done and I find out the card still works and works better hopefully. When finished I will try to post some pictures.

I hope some of this information might be helpful to anyone thinking of modding their card.

Too long didn't read. Taco also would like a photo. 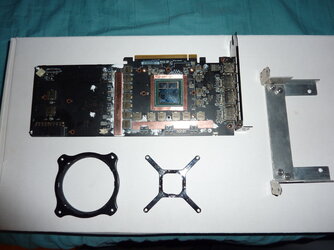 See? I had faith in him.
OP

That's a Corsair H55 mounting bracket drilled with 64mm hole spacing. The extra metal on the ends has been grinded off. The back bracket has been flattened. The aluminum bracket attaches to the back of my case holding the radiator and fan. That's a picture of the grill on the side of my case that the radiator sits behind. I re-attached the back plate with fujipoly thermal pad using longer bolts and nuts. Where the old fan use to be I put two plastic washers between the back plate and the board. I forgot to drill the back plate before re-attaching it with the thermal pad. The washers will keep the back plate from crushing when I use the holes for a 90mm fan mount to cool the vrms. I filled the holes to seal them so when I drill through the back plate the metal shards won't go under the back plate. I just got done adding the copper strips with fujipoly thermal pad and artic alumina adhesive.

"Its always good to have a little faith."

My next step is to attach more heatsinks to those copper strips now that I have some height to work with to clear the other components. Those will be aluminum and attached with arctic silver adhesive.
Last edited: Jan 11, 2019

In honor of your Team Red efforts, this may help put that cooling to good use. 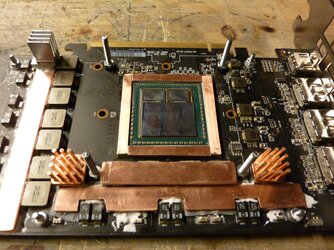 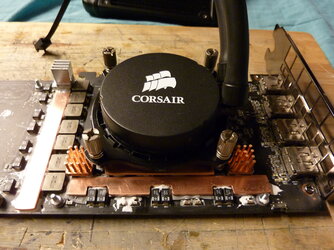 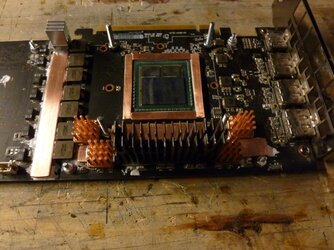 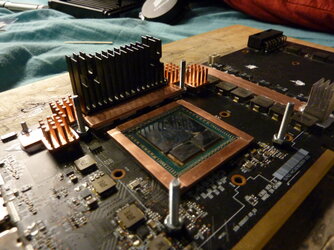 I'm still at it adding more heatsinks and a test fit of the cooler.

Nice! Can't wait for the next installment, and the results when you start testing it.

I just added the last of the heat sinks. I ran out of fujipoly thermal pad and had to use some stuff that came with an nvme heat sink. It didn't compress very well so I have the heat sink clamped right now to dry well so the pad doesn't push up the heat sink. It's the chokes and voltage chips on the left side of the gpu and memory. When the clamp comes off I will upload another picture of all the heat sinks added since the last time. I had to use aluminum bar on one set of chokes, ran out of the copper strip. It should be good enough though. This has been very big drain on my nerves...I just hope I didn't mess up anywhere enough to ruin the card. This card running stock cooling did pretty good, but the fan had to be run around 85% but it was just too loud for me. I was getting around 1590 on average on the gpu and thermals were all reasonable with the settings I was using in wattman. I was getting around 18200 firestrike score with the stock cooling. My cpu is an overclocked Ryzen 1600 to 3.8Ghz, with 16gb of FlareX Memory stable at 3200.

If you don't hear from me by the end of today...it mostly means I messed up and killed the card.

very creative! those copper bga sinks look awfully familiar. i believe ive got a box of them left over from my 8800gtx cards the two sided thermal tape i tried to use with them was junk and most of them fell right off. so i gave up and went with a pair of ek full coverage blocks. tbh it wasnt until recently that i tried a universal block for the first time in forever. this time around i used thermal adhesive and those suckers arent coming off ever lol.
i think you should be alright. with your experience im sure your gtg, goodluck!
OP

Thanks for the confidence. I thought I was done with the heatsinks but I added a couple more. I am on the last one now for sure just waiting for the Arctic Silver adhesive to firm up a little bit..gluing small parts.


All done, need a rest before trying this out. Will try to post later on. 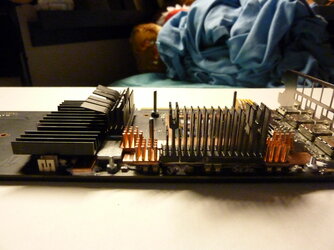 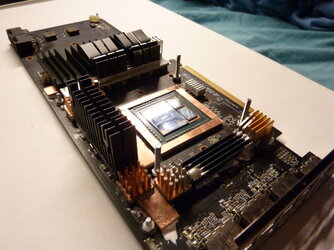 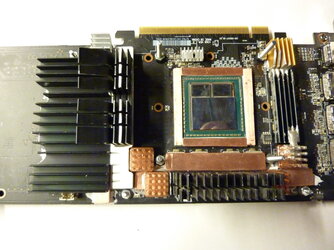 I'm liking the way this is shaping up!
OP

Success !!!! I just installed it in the case with the H55 and it booted right up. Thank you...thank you....thank you. Haven't run tests yet I have to restore my system from backup when I had it installed with the stock cooling. Right now at idle in a room that is 24.1C, it's idle temperature is 26C. Noctua fan on the radiator at only 200 rpm's.

Let me share a tip I found from my R9 290X. I like IC Diamond compound, buts way too thick. I also like the consistency of MX4 and the so called 8 years or more before having to apply it. So the last time when my r9 290x temps were hotter then I thought they should be I remounted the H55 using a mixture of both compounds and I couldn't believe the much lower temperature under full load I got. I did the same thing here with the vega and h55. They mix together well so far no problems at all. I still have the 290x in another machine with still really low load temps. Not sure if it will still last 8 years mixing them or a year from now but will wait to see.good. Will be in touch after some testing. 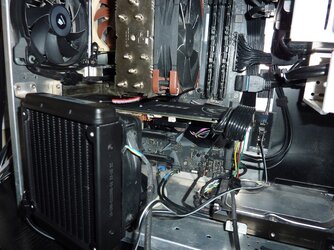 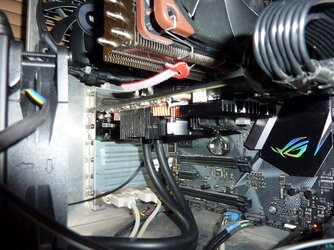 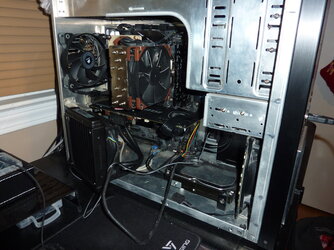 Nice! This project is just moving right along!

Wow!!! Under full load and overclocked the same as before but this time with the H55 my 120mm Noctua fan is only doing around 1,000 rpms. The temperature on the gpu under full load at that fan speed is only around 65C. I'm using the +142 watt power play watt mod that gets added to the registry. All the other temperatures are great, except for the hot spot temperature which I've seen at 100C. Today I will try adding the 90mm fan for the vrms and see if that helps lower that temperature.
OP 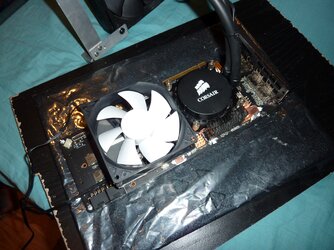 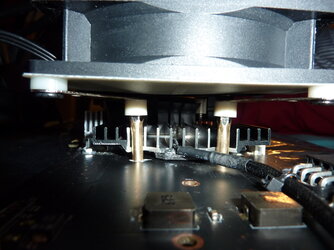 I attached a thermal probe that plugs into my motherboard on the vrm heatsink. I then attached the 90mm vrm fan and connected it to one of my fan headers on the motherboard. The motherboard controls the vrm fan using the temperature from the probe.

I have started testing everything under load when I get some final stable results I will post them, but so far temperatures all around are fantastic. Under full load and overclocked P7 at 1662 running firestrike my gpu temp goes up to only 45C with 1500rpms on the fan. All the other temps fall within 2 degrees of that except for the hot spot temp which on my last testing was 89C.
Last edited: Jan 14, 2019

Under full load and overclocked P7 at 1662 running firestrike my gpu temp goes up to only 45C with 1500rpms on the fan.
Click to expand...

Any improvement in the Firestrike score from the previous 18,200? Just curious, as the thermals/noise reduction alone seem to be worth the effort.
You must log in or register to reply here.