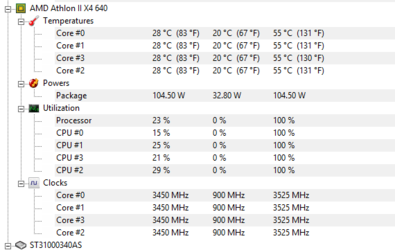 That is a screenshot from HWMonitor after playing Arma 3 on the default settings with a Gigabyte GTX 670 Windforce X3, 8GB DDR3, and the Athlon II x4 640 at 3.45Ghz and 104Watts from 3Ghz and 95Watts

The Cooler is an old one made for AM2 but works on my AM3+ Gigabyte motherboard.
Its called the Gigabyte G-Power Pro
Those temps are running the fan at 1500RPM.

In a few days I'm getting an AMD FX 8320 Black Edition which runs at 125 Watts stock so I will be testing that with this cooler I will post my results here if anyone is interested.

That cooler might work OK with the FX at stock but it's going to have a hard time keeping up with the 8 core space heater you're putting into that board. Speaking of boards you'll want to be sure the motherboard can handle that CPU as wekk. FX needs a fairly robust VRM to drive it.

I doubt you will get good temps with that cooler on an FX8320.

I have to agree with Johan45 on the Motherboard concern too. Which one to you have?
You must log in or register to reply here.