OK, so I'm pretty new here. I've seen some beautiful work and was encouraged to post mine by philipgilliam who is working on Maquina de los Muertos https://www.overclockers.com/forums...ay-of-the-Dead-themed-Bitfenix-Phenom-M-Build

I told him I'm a bit far along and don't have many progress pictures, but I just bought a new case and am starting somewhat from scratch.

For starters, here's what my old build looked like. Please excuse the poor quality of pictures; I only used my phone to take them. 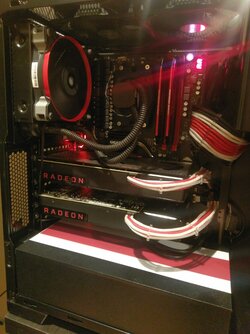 The window on the side was the first hard mod I ever attempted. I got the wrong kind of dremel wheel and it made the hole process (more puns inbound) much harder than it needed to be. I originally had it held in with the self tapping fan screws, but i decided silicone glue was a better idea. 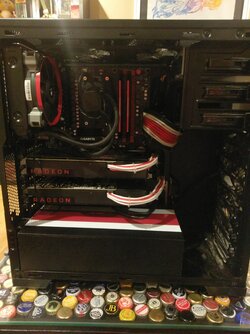 My second hard mod, if you can call it that, was taking out my hard drive cage. I use SSD anyways, and I attached them to the back of the mobo tray to hide them as you'll see in the next pic. It also gives a little more airflow since my intake fans are on the front. 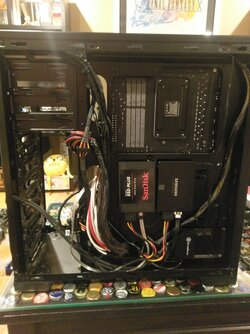 I don't think enough people show their cable management from the back. It looks disgusting, I know, but it looks good from the front and everything gets power. 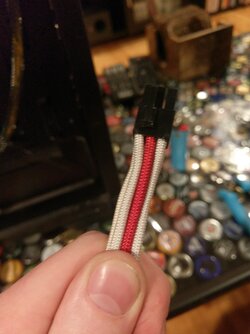 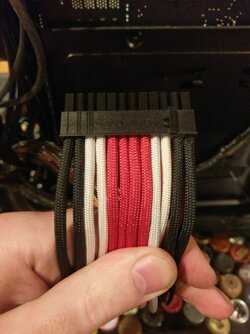 I did the sleeving myself. The PSU is non-modular, and I didn't want to take its top off since I was planning on making the shroud for it to cover the extra cables. So I sleeved them far enough back that I could hide the non colored parts behind the mobo tray. The end of each sleeve got attached with electrical tape. I think modular PSU are overrated. If you can hide the extra cables without hurting airflow, why add an extra point of failure (albeit an unlikely to fail one)? 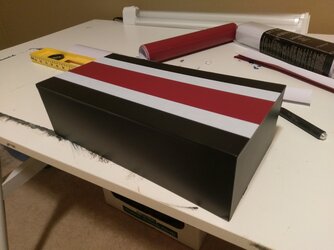 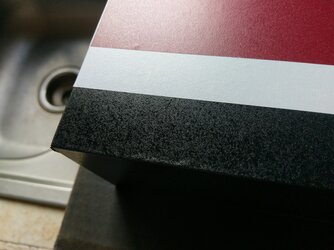 The shroud is some clear acrylic with adhesive vinyl sheets attached for the pattern. I hit it with a textured clear coat so it would match the powder coat on my case.

That's pretty much it for my old case. My next post will be the true start of my build log in my new case which I will tease below. 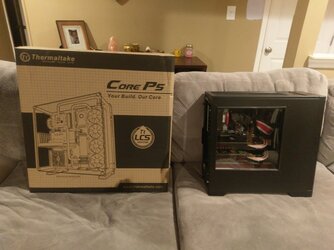 I hate to post so much for the start of this log, but I realized showing off my old build was a mini project log of it's own. Here's the real start of my log: 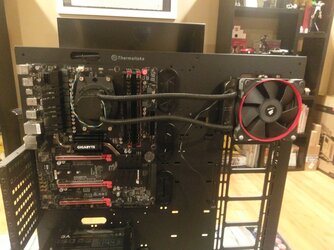 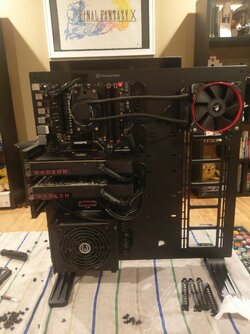 These pics are just all of my old components in my new Thermaltake P5 case. The new addition is a modular PSU. I mentioned above that I think they're overrated if you can hide extra cables, but I really can't do that here. I love this case; I think it's gorgeous no matter what parts you put into it. My little AIO doesn't really do the right side justice though. Looks pretty barren, which is an issue I'll get around to fixing.

First thing is first of course: we need some N7 pride on this thing. 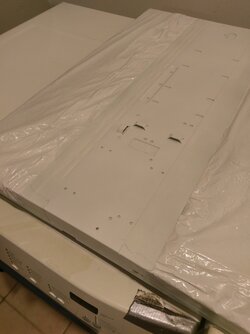 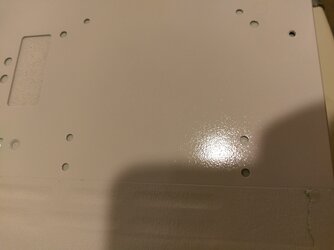 I started with a nice bright white. I'm glad the powder texture showed through the paint. It makes the paintjob look a lot more natural. 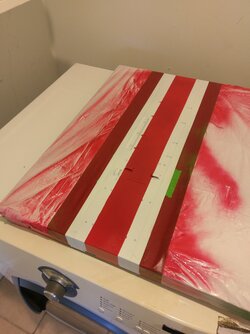 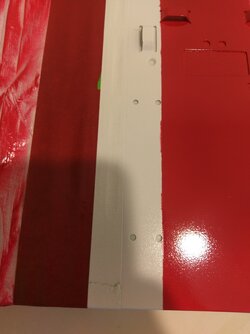 I fixed it after this pic, but you can see along the edges of the red, I didn't get my tape down perfectly. Taping all those little dimensional pieces is hard, especially when you're going for a perfectly straight line. It doesn't help that I accidentally left my tape roll out in the rain and need to get some new . I fixed it afterward, but it would've been nice to get it right the first go around. 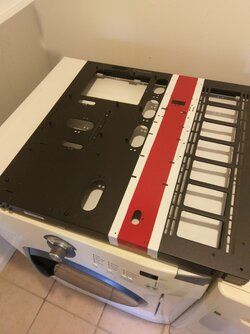 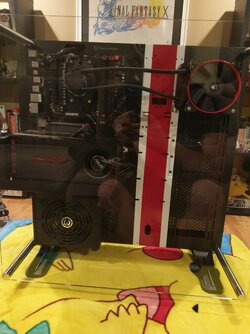 I got some pcie risers to mount my video cards vertically too. I got mine a bit long, but they work very well and look great. Having that tray underneath the vertical GPU is the best way to hide the case header cables IMHO. I hear the ones from Thermaltake are trash unless you get the premium ones. The case comes with one of their basic ones, but I needed 2 and wanted them to match so I went with these.

And there we go. Now there's a nice splash of color to tie my theme in. I think it goes a long way toward balancing the right side out too.I'm gonna get some parts to really flesh out that balance, and that'll be my next post.
Last edited: Apr 19, 2017
P

Have to say it looks beautiful if I'm a tad partial to you. With a little inside knowledge of where the build is gonna go I've gotta tell you I'm excited for some updates.
M

Did you also make the table with the bottle caps?
OP

Moratek, I did make the table. My wife and I figured it up, and if you include all the beer we drank to get the caps, the table is the most expensive piece of furniture in our house. The computer is catching up though.

Nice I love how these cases make it look like a showcase . I have had wall mounted systems before and loved them .
OP

I haven't quite gotten around to wall mounting it but that's definitely the plan. Space becomes more and more premium the more hobbies you have.
OP

For those checking out my sweet table instead of my sweet computer, here's a couple pics. I do most things at this table, so it'll be in the bg of most of my pics. 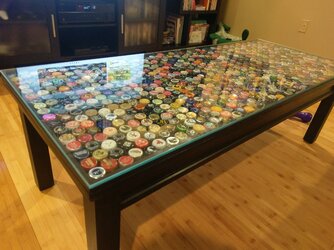 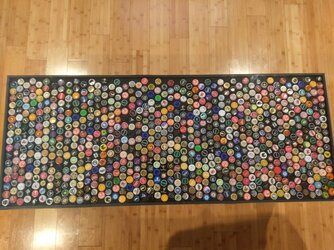 Thanks for the table pics!

I made a couple of similar tables, but using broken glass pieces collected from the beach & lit up by LEDs.

You did a great job on the sleeving for your last PSU, will you be doing it again for this one? and the CPU cooler connection?
OP

I'm definitely gonna sleeve my psu cables. I'll probably only do it so far back like I did before rather than the whole cable. I don't want a big mess of color coming out of the psu cause it shows so much. I also don't want to have to sleeve the SATA power cables since the only part that shows is right there at the psu. I should've bought an extension last time and sleeved it, but home sight is 20-20.
You must log in or register to reply here.

Y
1st Attempt at a Mini ITX - What're your thoughts on this build?