Need a couple of opinions

It's been quite awhile since I have been here. I've ripped my rig apart for an upgrade. I'm upgrading the hardware and downgrading the water-cooling. I think I'll stick with one rad and one pump to cool everything instead of the old setup that had four pumps, three res, 3 x 480 and 1 x 240 rads. Since I don't need all the space, I've removed the pedestal from my CaseLabs STH-10. I'll only be cooling the CPU and 2 x 1080 FTW, so one EK RX 480 should handle it.

Here's where I need your opinions. No recommending any other parts. This is what I have. One is for cooling and one is for a CPU. I didn't want to create two posts.

First, the CPU. I have an I7 6850K and sort of have an I7 6950X. The 6950X was bad and I had to RMA it. Intel did quite a turn around on the standard RMA. I wasn't about to give them 1700.00 for a cross-ship. I shipped it out on Tuesday. They received it yesterday and shipped the new one today. The old one kept rebooting at post and when it did boot, half my RAM wasn't being recognized. I stuck the 6950K in the Rampage V 10 and everything was fine. Should I keep the 6850 or 6950 and sell the other? I'm leaning toward keeping the 6850 for the higher clock speed and four less cores. Opinions?

Next question is about my case cooling. Should I add fans (Corsair AX120) to the bottom or leave it as is now?

I appreciate the assistance!

As to the question about the CPU, this is really dependent on what you use the system for. Can you clarify what your main purpose of the rig is for?

For the fans, if you have the fans I would add them. I always prefer to have extras because it allows me to run them slower and quieter when possible.


On a side note, if you still have your 240 rad I would add that to your loop in addition to the 480 rad. Those 1080s are listed as 215w tdp cards plus the 140w tdp from either processor gives you a potential max load of 570 watts. The single 480 rad would probably be ok but you will have to keep those fans moving at a good clip to mantain decent temps.
OP

I browse the web and play solitaire. I mostly game @ 4k and do some video rendering. I don't use anything that would use 100% CPU and GPU often enough to totally load the system. I guess I should have gotten the EK CE560, but I wanted to use what I had. I still have the 280, but I prefer to stick with one rad.

Choice is yours on the psu location. 1500w psu though...oof. hope yoy needed that at some ppint in kts life!
OP

I would probably install the rads at the bottom compartment so you have less points of leaks hovering over your hardware. Res/pump in the area where the front rad is now and PSU either at the bottom or up top, which ever is cable manageable and not an eye sore.

I also agree a 240mm and a 480mm should suffice enough for this CPU + two GPUs with some OCing headroom if ever needed. Should still run quiet.

I would maybe even go as far as adding two pumps in serial since they won't run as hard as one would by itself, resulting in lower audibles and also having redundancy.
OP

I have a dual bay res with two pumps. I put an RX360 at the top to go along with the RX480. I'm not worried about leaks. I use compression fittings and in 12 years I had one tiny leak from a CPU block that knocked out my top GPU. I cleaned it up and everything was fine again. Now I have had some doozey leaks during leak testing, one where water poured all down the motherboard from the CPU block. I didn't have the tubing all the way down and I was using clamps then. But that doesn't count. No power + leak = no problem.

Here's my planned loop configuration. I do have one question. I know it sounds dumb, especially for someone that has been doing this since 2005, but I never have done this before. My rads have ports at the top and front. I have always used the front ports. Can I use the left top as an inlet and the right front as an outlet or vice versa? That will help a lot.

BTW, the Corsair AX and SP fans suck for installing. They have a rubber grommet in the screw holes. It is impossible to screw them in. The rubber gets all **** eyed and it takes massive amounts of pressure to screw them in using the included screws or normal fan screws. For case fans, it's easier to use nuts and screws. 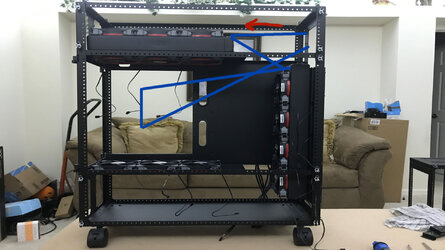 Yes it is quite possible to use the ports as you have laid out. The ports on each side of the rad share a common end cap so either or both can be used. I had an installation one time with a rad installed vertically where i used the front port to feed out of the rad to the pump and then had another line going up from the top port to a fill port and this acted as a t-line in the loop that i used to bleed and fill the loop without the need for a resevoir.
OP

Thanks a bunch, Lochekey. For this loop, I see a top/front combo on one of the rads. There are some cross flow rads that you can't do this, especially from Hardware Labs.
OP

I'm installing a shut-off valve and a T-Line for ease of draining. The plan is to shut the valve to bump the pump to drain the liquid out of the drain tube. I should have purchased to valves now that I think about it, but where is the best place to put it?

1. Within the drain tube itself? This will be harder to drain using the pump because most of the liquid will still pass the T line when bumping the pump. BUT, the drain tube could be kept free of liquid except when draining. In my experience, water sitting in a T-Line sort of stagnates and corrodes the tube cap over time.
2. Somewhere after the T-Line, preferable by the res inlet. That way the flowing liquid is forced at a greater rate through the drain tube. But in this instance, I have the stagnating liquid in the drain tube.

If I had two valves, I could put one in the drain tube and one by the res inlet to have the best of both worlds. Should I pickup another valve or use option 1 or 2?

You can never fully drain the system. The GPU and CPU block will still have water in them, the lowest parts of the rad (s) are still above the outlets, the pump will still have bits of water. So, one drain at the lowest part right after the pump is your best bet. Then you 'could' disconnect a water line up high and use a 'small amount' of compressed air to help. You "CAN" bulge a rad, so be careful. In the past I have drained all I could, then tilt the case to try to get more out. I usually refilled with distilled, ran again for a few minutes and drained once more. I considered that good enough and refilled with my choice of liquids.

Thanks Conundrum. I just went without like i always do. If it ain't broke, don't fix it until it is.
You must log in or register to reply here.

need help with the upgrade