I bought an EVGA SC Ultra Gaming 1660 Super from Amazon back in September. Everything was fine for a while, but over the last couple months, it randomly crashes my system. I don't mean like blue screen, but rather the fans ramp up to 100%, and the card stops outputting to my monitor. It's not overclocked anymore, that was the first thing I looked into eliminating, but it still happens. Thing is, it doesn't seem like there's any consistency to it. The system runs for hours, or days, or even weeks just fine. A few times it's happened twice in a row, as in the second came while Windows was still in the process of logging in after rebooting from the first "crash", but as I said, that's only been maybe three times tops. I've reinstalled Windows, and reinstalled my GPU driver...neither helped.

Curiously, I had a similar issue with a 5600XT last summer, where it wouldn't run for more than a few hours without either doing exactly this, or blue screening my PC. I replaced my PSU back then, thinking that might be the issue, but it didn't fix anything, and bought the 1660 Super to replace said 5600XT...but now I'm wondering if maybe it's my motherboard? The 5600XT, and now the 1660 Super, are the only two cards this has happened with. I had a 1050Ti in this system for a couple years, no issues.

I doubt it. Have you tried different GPU drivers (I see reinstalled, which I'm assuming is the same version? What version are you on? Tried newer? Older?
OP

EarthDog said:
I doubt it. Have you tried different GPU drivers (I see reinstalled, which I'm assuming is the same version? What version are you on? Tried newer? Older?
Click to expand...

Currently on WHQL 461.09, and I wanna say that's the second new driver I've updated to since this all started, maybe third. None of them have fixed the issue. Haven't tried older yer though, I'm guessing a good place to start for that would be the last driver I had installed for my 1050Ti since it was also an Nvidia card?

I know it's more than possible I got two bad cards in a row, it just seemed strange, that's why I thought it might be the motherboard.

Go backwards to fix Nvidia's drivers ...it is the new ones that always cause my issues. The new drivers are for new hardware. Sure they are supposed to work with everything...not always the case.
OP

It got significantly worse the other night, happened like 4 times in the span of 12 hours, so I decided to reseat the card and the power cable, as well as check the cable connection at the PSU end (modular unit). So far so good, still on up to date drivers as of now. If I get another crash I'll try reverting drivers, see if that fixes it.

interesting
i have the same card and occasionally it will ramp up to 100% fan speed but i never lose signal to the monitor.
i'll check it out and see what i am using for drivers and bios versions and what not in the morning for you

i figured when the fans ramp up like that it was getting a false temp reading, it only happens some times and only lasts for a few seconds. monitoring temps i dont see anything high pop up but the polling rate for the software (rivatuner OSD) might not be as fast as whats happening on the card it self

edit:
sorry about the delay guys, sort of emergency happened on sunday and a long day today but heres what i got: 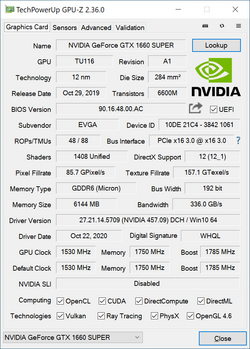 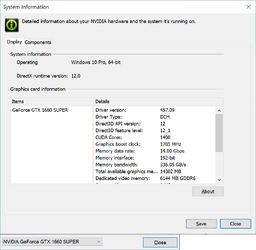 this is in a micro atx system i made for the entertainment center, i thought it was odd the fans would ramp to 100 and then back down a few seconds later. unlike you though i dont lose video signal.
I do have it hooked up over HDMI, maybe its different over displayport?
Last edited: Feb 2, 2021
You must log in or register to reply here.