Hi all, new member here. So I weighed the options and decided to upgrade the ol' rig instead of a new build and wanted to start overclocking the cpu. Although I actually haven't even gotten to the overclocking part, I've run into issues with prime95 at baseline.

The system runs very well, I haven't had any issues in everyday use or playing games and the gaming benchmarks are fine but obviously could be better. I began looking into overclocking and downloaded some programs; prime95, CPUZ and hardware monitor. I checked the baseline stats for my system and everything appeared normal, I had the latest drivers and updates for everything. However, running prime95 fails a CPU core immediately whenever I run it. I'm new to this but browsing the forums and googling the issue didn't give me results I felt confident enough to use so I figured I'd ask. Here's the given error message.

So I repeated the test a few times, it's not always worker #6 but most of the time it is. Also in this screenshot the rounding error is huge, it's usually just above 4 like 4.8 or 4.7. Temps are fine, CPU hasn't risen above 41-42 C 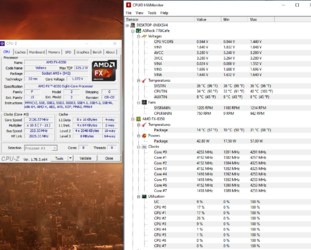 that does not look like it's going to live long with that cpu, let's not over clock it please.
the power section of the board is much too weak.
OP
C

So the power supply is too low?

ChemicalJ said:
So the power supply is too low?
Click to expand...

No it is your motherboard that is the problem. A big problem. The larger picture is a board that is well suited for an 8350. Contrast it to your board. 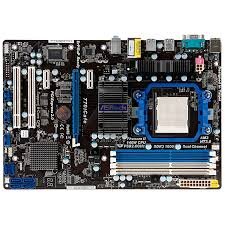 I didn't think it was going to be issue based on the mobo's specs; supports 140w cpu and is on the cpu support list but I'll take the advice here over that then.

If you look at the core clocks and cpu usage the numbers are all over the place. That is a terrible sign. If you are in the USA I would spend the $90 and get an ASUS Gaming Aura and problem solved.
OP
C

I appreciate the suggestion, that sounds like the best plan in this case.

Technically, that CPU is compatible with that motherboard. In other words, it will run but not at full capacity. The motherboard manufacturers are deceptive in my opinion when it comes to these scenarios where you have a budget board running a big gun power hungry AMD FX CPU. The VRM (voltage regulation module) of those cheap motherboards are just not up to the challenge so the motherboard downclocks some of the CPU cores in order to keep from frying the VRM.

Asus you mean. And I'm not even sure that board is up to the challenge. Personally, I would go fro a Sabertooth if I could at all afford it.
Click to expand...

ChemicalJ said:
I didn't think it was going to be issue based on the mobo's specs; supports 140w cpu and is on the cpu support list but I'll take the advice here over that then.
Click to expand...


chrisjames61 said:
If you are in the USA I would spend the $90 and get an ASUS Gaming Aura and problem solved.
Click to expand...

Or a ASUS M5A99x Evo R2.0, always an overclockers favorite.

ChemicalJ said:
I was hoping it wouldn't be an issue but I think I got the idea >_>

I didn't think it was going to be issue based on the mobo's specs; supports 140w cpu and is on the cpu support list but I'll take the advice here over that then.
Click to expand...

It is very, very deceptive. Also a 8350 can actually draw 200 watts under load with a decent overclock. Your board even at stock clock fails running Prime 95. A good rule of thumb is that MIcroATX and AM3 or AM3+ isn't a good fit. Many ATX boards are crappy too. But if you do a little research you can get a good board for relatively cheap.
OP
C

Wow thank you everyone for the quick feedback! My rig is a bit on the older side and it was a budget build a few years ago. I got a good deal on some parts and I thought my rig could handle the full upgrade but I'm glad I didn't take it further. Thanks, I'll check back after I get that new motherboard.

none of us mean to dog you or your rig.
the manufacturers out and out lie about these boards supporting the eight core cpus, many will........for a while, and in my book that's an out and out lie.
the other option is to trade the 8350 for a 6300 if your software doesn't use all 8 cores of the 8350.
for clocking the 8 cores the asus sabertooth and crosshair 5 formula z are about it.

At this point I would rather just get the motherboard and call it a day, it seems like less of a hassle. Unless of course it's going to be a giant hassle down the line...

depends on what you do with the rig.
a better board is always a good idea any way you look at it.
OP
C

I have the AMD 970 Pro Gaming board there fairly cheap and easily overclocked to 4.6ghz fx-8350 on air, and the bios settings are pretty simple to do as well. Using a Cooler master EVO 212 with dual Cooler master sickleflow 120mm and honestly I am super impressed! It runs very smooth! There is a ton of threads in here as well how to easily overclock upwards of 4.6 as well but IDK if I would or not on air... might step the game up to water to get past that point.

You needs good cooling like a NH-D15 or the likes and a really good chip to go 4.7ghz or above (on air) and even then it should be right on the edge. Ex one of my old rigs :