I would like to overclock my Core 2 Quad Q8300 to 3.0 GHz,but I don't know how to edit the settings in my BIOS,what to disable/enable.

I would please you to tell me how to set every single settings in my BIOS that needs to be changed (enabled/disabled etc.)

And also please help with the setting of the proper optimal ,and lowest possible value for the voltage.

Here are photos of the overclocking section of my mobo :

and my mobo's manual : https://download.asrock.com/Manual/P45DE3.pdf

Please help me,because I am a noob and even reading of the manual wouldn't help me.

Thank you in advance.

Here's a guide that we have https://www.overclockers.com/forums...lock-C2Q-(Quads)-and-C2D-(Duals)-A-Guide-v1-1
Have a read through, this should get you started and familiarize you with the terms

No, it would not be possible for us to give you plug and play bios values that will guarantee overclocking success. First, none of us has the same combo of CPU, motherbord and RAM as you. Second, every Q8300 CPU will respond a little differently to the same bios values. There are subtle difference in silicon and manufacturing processes that make the same model CPU from different places and different production runs, well, different. We were all noobs at one time. You need, first of all, to grasp the basic concepts that would apply to overclocking in general such as increasing voltages along with frequencies and monitoring temps as you do.

The other thing is, that motherboard will not be a good candidate for overclocking a quad core CPU. It has no heat sinks on the VRM (Voltage Regulation Module) and the VRM will quickly overheat when you begin to overclock.

What are you cooling the CPU with. The stock OEM cooler?

But since that CPU has an "unlocked" frequency clock it should be relatively easy to overclock per se.
Last edited: Jun 22, 2020

It might be best for you to choose the "Load CPU EZ OC Setting" and "Overclock Mode - Optimized" and allow the bios to pick overclock values for you.

But again, unless you have decent aftermarket cooling there won't be much point.
OP
T

trents said:
It might be best for you to choose the "Load CPU EZ OC Setting" and "Overclock Mode - Optimized" and allow the bios to pick overclock values for you.

But again, unless you have decent aftermarket cooling there won't be much point.
Click to expand...

The "Load CPU EZ OC Setting" is greyed out and disabled,how do I enable it?

It might be grayed out because it is a subset of something else that needs to be turned on. Try the options in the next one down. "Overclock Mode" and see if one of them releases the one that is now grayed out.

You haven't answered my question yet about what CPU cooler you are using.
OP
T

I am using an aftermarket CoolerMaster CPU cooler.

theoverclocker9 said:
I am using an aftermarket CoolerMaster CPU cooler.
Click to expand...

Which one? Coolermaster makes a lot of different products, some big and some small.

You should make a signature with your full systems specs for us to help you out better like the one Trents and I have below our posts. 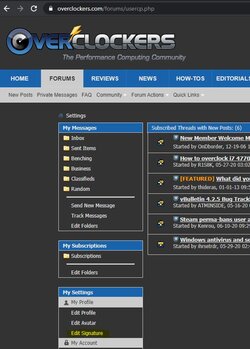 trents said:
Which one? Coolermaster makes a lot of different products, some big and some small.
Click to expand...

Here you are some photos from my CoolerMaster CPU cooler :

You won't be able to get much of an OC on that cooler.
OP
T

bmwbaxter said:
You won't be able to get much of an OC on that cooler.
Click to expand...

So what do you think how much can I overclock the CPU,to which frequency? Its current frequency is at 2.50 GHz.

So what do you think how much can I overclock the CPU,to which frequency? Its current frequency is at 2.50 GHz.
Click to expand...

How far you can overclock it will depend on your chip. I would recommend following the guide that Johan45 linked. The older chips are more complicated to overclock compared to newer chip so you will have to do more experimentation on your own to dial it in.

Just an old style top down cooler with no heat pipes; meant to be the equivalent of a factory cooler. If I were you, I'd forget about overclocking and live with what you have until you can upgrade to a more modern system.

This will be an FSB overclock and as mentioned that cooler will not get you much at all. It has a 7.5 LOCKED multiplier. There is no simple straight up "do this or that". You'll be basicly adding some FSB, say 5Mhz, at a time and test for stability. Rinse and repeat. Max volts according to Intel says 1.36V. I think though IIRC you can run 24/7 @ 1.4v. YMMV.

Z
You must log in or register to reply here.