But anyway...I've finally been having some success as far as OCing my new set of Trident Z Neo (Samsung B-die) memory, as well as pushing my CPU to 4.3ghz @ about 1.35v (which is pretty damn good as far as I can tell). But as always, I'm looking to push it even further, because again...I hate my life. That said, this is my first time working with the X570 platform, as well as my first Asus motherboard and Ryzen 3000 CPU. So there are a few settings in the Digi+ VRM section of the X570-E's bios, that I am having a bit of trouble understanding/configuring. I am familiar with Load Line Calibration and Spread Spectrum and have worked with them a lot in the past.. but this is the first mobo I've owned that also has settings for Power Phase Control, Power Duty Control, Switching Frequency and Current Capability.

Now, a few of these settings seem to be 'self explanatory' (such as Current Capability)...but again, this is my first time working with these settings and I would appreciate if someone could give me a brief definition/explanation of how these settings affect the CPU, DRAM, VRM etc. and also how they also affect power draw, current, etc. And if you could also give me a few suggestions or 'starting points', as well as explain what would be considered 'safe' for my particular setup, I will be more than appreciative and I will write you a nice long heart felt thank you letter

Thank you in advance for any help you might provide...I will post my full system specs below as well as an image pointing out the settings in question. 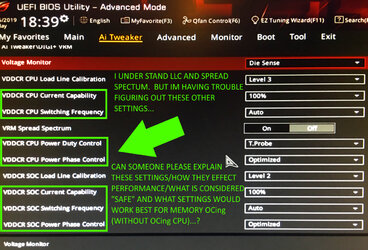 L
Need help on mobo amd I am confused.