hi, this should be my "mean machine" for the years to come.
I would run games as Metro, Bio Shock , Dead Space, Racing games.
The heavy work would be done on 3d animation and renders, digital effects, video editing.
Progs like Blender, 3d Studio Max, Lux Render, the usual Photo Shop and Corel, Particle Illusion, After Effect, Premiere or Final Cut
The idea is of a built that is efficent, upgradable and with a very good performance/price ratio.
I'm Italian and I may not know all the tech terms that you may use.
Looking forward all those avdices that will help me built that pc.

running on windows 8.1 pro due to some of the programs certification that I will use.

Cabinet : Itek Patriot 2..Italian brend, nothing specisal, but it has all I need, and is cheap, so I can spend a bit more on other parts.
CPU : i7 5820k...upgradable to 5930k or 5960k...depending on the money available.
Mobo : msi x99a sli plus or msi x99a gaming 7, as far as I understand they have all I need without the fancy stuff that I won't use anyway, the only differencies are on the audio and lan, but I don't know if the difference between those is woth the price difference.
Ram: I want to take advantage of the Quad Channel, My pic would be Corsair Vengeance lpx ddr4 2133, 32g, the 32g due to the experience of some friends in the vodeo editing field. maybe in time I may go to 64g if needed.
AIO : this is one thing I'm puzzled about. on the cabinet there are 2x120 vents on the fornt and 1x120 on the back. the AIO that should do for me are, Corsair h100i v2, nzxt kraken x61 and swiftech h240 x2. my pic would be the swiftech since it's expandable, hope the term is ok.
Video Card : msi gtx 1070 gaming x or inno3d gtx 1070 ichill x4, and when possible I would go sli.
SSD : 500g Samsung 850 evo sata III, or the 480g SanDisk ultra II, but it seems that the Samsung has a better overall performance.
HDD : 1T Caviar Black, in case I'll add another later.
PSU : considering the max upgrade possible a psu calculator gave around 900watts of consuption to run the built, so, if I got it right, to be covered even for the peacks I should choose a PSU of about 1200/1300 watts. I would go for the Enermax Platimax 1350.

About overclocking I would go for some "safe" overclocking, and as far as I can understand, that would mean with no volt tweaking.
I've red that I could oc the 5820k up to 4.0/4.2 without stability issues, but have no idea of what I could do with the gpu and the ram.
Please consider that some renders could run even for more than 24 hours.

I'm worried if the would be any bottleneck, and of course if the patrs that I've picked will do the job.
Any help is more than welcome.

1 - For the DDR4, as you are using some RAM bound applications (I guess), go with 3000/Cl15 at least. There is almost no price difference with 2133. G Skill is my brand of choice memory wise.

2 - All x99 boards are considered high end. Fetch one with the OC socket (DDR4 performance is heavily linked to cache speed, see 1 ).
http://www.kitguru.net/components/m...o-use-o-c-socket-on-its-intel-x99-mainboards/

3 - You should reach an easy 4.2GHz at least, with a decent cooler (not mentionned in your post). Noctua NH-D14/15 or Raijintek Nemesis (great cooler for low price, as efficient as a NH-D15).

For nVidia GPU's I would go EVGA, best customer service ever and step-up program, if you feel like upgrading your GPU in the 3 months following the purchase.

1 RAM...if I read the tech stuff correctly...those x99 take ram up to 2133..all the higher speed have the * of oc...I will look again into G Skill but they are not that easy to find here

2 OC soket...iI will for sure look into the OC soket for the mobo

3 Cooler...the one that you mentioned are AIR? Since I would upgrade with all 8 banks for ram, I wonder if there will be room for them...and I see that you use the swiftech for the cpu

thanks again...I will ceck into your suggestions

3 - I am very happy with the H240X. I've added a 280 and a 140 rads, a Raijintek Universal GPU block and it keeps both my GPU and CPU at very low temps. Yes, RAM clearance can be an issue for you. An AIO is an ideal solution.

thanks!
I believe that even the rip...something of G Skill, are those newer?

the intention is to go for 5960k when possible

I will try to find other psu calculator and see what comes out...but I'll keep your advise in account
OP
A

the "final" machine would be with

Good luck with your purchases and tell us when you are done or have any questions!!
OP
A

I've tried to go deeper in the tech stuff....a nightmare for me...and these are the results...PLASE correct me if I got it wrong!

1 as far as the OC soket goes, from the €205 for the msi sli plus, I have to go all the way up to €365 for the Xpower, and I'm seriously wondering if the difference in performance would be at least the 50% more

2 for the ram speed, I've asked the MSI Support, and they tell me that the x99 mobos will "see" up to 2133, any faster would be by overcloking, got curious abuot it and looked into Asus, Asrock, and Giga, they all state the same, ram 2133, any other faster speed with the (oc) mention. If so, it would seem a bit pointless to get a 3200, unless there is a trick to make to mobo see the 3200 ram as a 2133 overcloked one. I have no idea of how it works.

3 if what I've wrote about the ram speed is correct, then I've found the Ripjaws 4 and the Vengeance lpx, the Rip are C15 the LPX C13, €0.50 of difference so it doesn't count, BUT, if I want to go for a safe oc, what would that be? 2666? more? less? as for overcloking should I trust more G Skill or Corsair?

4 for the video card....when I've looked into the 980ti I've found just a couple comparisons charts that did include the inno3d, but in those it seemed that it works great...can't find anything on the gtx 1070 of inno3d, and I'm wondering how it is as brand?
my choices would be between the msi gtx1070 gaming x and the inno3d gtx1070 ichill x4, with the intention to go sli as soon as possible, what would be the "safer" pic? maybe some mild overcloking.

Ready to built as soon as I get a hang on these few things.
Thanks in advance for your help

1 - No, not worth it. As soon as the Mobo has the fatures you need, you're good. Everything else would be bling to you.

2 - That's Intel specs. Overclocking the RAM is doing automatically by setting DDR4 to XMP settings in Bios. All X99 platform run DDR4 up to 3000MHz for sure, and sometimes more if you have a good IMC (integrated memory controller) on your chip. Luck of the draw, you might do 3400 if you are very lucky. Z170 will go all the way up to 4133MHz. (See pic of my memory setting at the end of the post).

4 - All brand are good. I like EVGA thanks to their customer service, tech support and step up program. But that's just me. 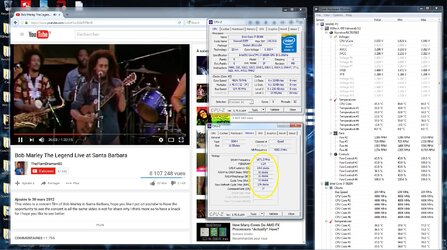 Save some money on the PSU. Go with a 850W, it is plenty for your setup.
OP
A

Tir,
thanks for your help, but I still don't get it.

Leegit
thanks
I was actually thinking about a 1000w PSU, at the end of the upgrades the built will have

For memory when you start up the PC bios for the fist time it will be default to intel speciation of 2133Mhz and timing. Then in bios you can set MXP (Extreme memory profile) and that will set the rated memory speed like 3200MHz and timings however the pc might not work at those setting, so you might have to tweak settings and if that does not work you can try replacing the memory.
OP
A

when it comes to tweak bios setting and similar I get very uneasy, always afraid to f... it up!
and if at the end the bios does not accept the settings I have to find the right ram.

and if I overclok the ram? from 2133 how far can I go and keep the system stable?

is MSI known for having a good MXP (if there are different MXP)?

I'll need to find somebody to help me out with the tweaking part, got a friend in mind, have to find out if he has time.

If you send in your motherboard for testing by the manufacture under warranty they only test at intel's stock memory specification.

let me see if I got it right

1 if I overclok the ram, depending on what I'got, I'll see how far I can push it by going step by step and stop at the oc where the system runs stable. so I get the 2133 and maybe reach 3000 if I'm lucky.

on the ram spec of the mobo, ( I guess is Intel specs) 3000 (oc) is the max possible speed, reading around here and other forums, the most used answer is to install a 3000 ram and then with the XMP use a 3000 profile...or create one...and sed to be pretty safe too. if this is the case, how do I verify if the Msi x99a sli plus has this XMP? or is it just a stupid question and all x99 mobos do have it?

Get a mobo with OC socket (either Asrock or ASUS). They will allow a much higher cache overcloxk (3600/3700 max with standard socket and up to 4000+ with OC socket).
OP
A

as far as OC soket goes, I should jump from the €205 for the msi sli plus to way over €300 and it seems to me that the increase of performance would be way under the 50%, so I would rather save the money for the AIO

as for the kind of ram, I know I'm stupid like a stone but I still don't know what to do

could you tell me which is the best choice when it comes to stability/performance?

keep in mind that I will get 4x8gb, to fill the first 4 slot and go Quad Channel

what would be instead the difference in performance between a CL 13 and a CL 15?
maybe it's a non sense question, just wondering
You must log in or register to reply here.

I
SUGGESTIONS FOR A NEW MEMBER - AORUS RIG

F
System hangs up first thing in the morning, then is fine after that...help!