I had an Enermax SFX PSU sitting around and some spare DDR3 so I decided to put together a mini ITX HTPC for giggles. So, I picked up an Asus H110I-PLUS D3/CSM mini ITX for $60, added a 35W Skylake LGA 1151 i5 6400T from eBay for $130, and then a Spire PowerCube 501 for $30 to put everything in. Of course nothing goes planned, so the Enermax 270W SFX PSU wouldn't fit because it has a fan on the bottom. I removed screws securing the fan, bent the mounting flanges down and pulled it off to the side so it would fit. Now the fan is still connected, but sitting at a 45 degree angle so it can still cool the PSU while at the same timing providing airflow over the H110 Northbridge chip heatsink. I used an old low profile Intel HS/Fan to cool the i5 6400T, installed an olf 80 GB Intel SSD with Windows 7 professional already installed on it and it's running like a champ with the Skylake/DDR3 combo.

The case will fit a half-height video card so if needed, I can pick up an MSI GTX 750 Ti 2GB DDR5 model N750ti-2GD5TLP. I'll just have to remove the PSU fan entirely and hope for the best. It has pretty decent airflow with vents on both sides, the bottom, and the back and can also hold a slim optical drive which I might add sometime - or not. 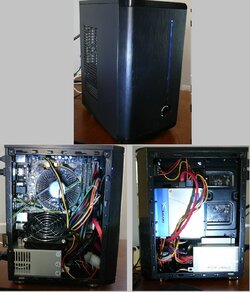 Hi. How has this been working for you? I'm looking to build a NAS (or whatever comes of it) and looking for inexpensive parts right now.
You must log in or register to reply here.

Advice on my new build
2

B
Not getting monitor signal on new PC