Update:
I ordered two new (to me) 8TB drives. Referb from Amazon. They are most certainly SMR but they have a 3 year warranty which goes a long way for me. How long? About a year longer than if I bought new. Not bad you say. Yep. Not bad I reply. Yep you say again.

I took about an hour after work and pulled all drives and cables both power and data. I installed all new data cables and I installed the new 1 Molex to 5 SATA power adapters. They aren't molded but rather pins that are set in. I feel much more comfortable about these. I also turned all of the drives around which meant removing the caddies and reinstalling them.

When it first came up, it showed an error on drive 1. I started cursing. Like saying **** and **** and **** me mother ******. All stuff that you can't read because I know that there is a filter and I'm not trying to get around it. (Man am I funny. Cracking myself up for sure.) Then I remembered. I bought one of the 8TB drives to replace the one I lost. Duh. Stopped the array which had auto started and fixed my drives. Got my Cache drive back in and started the rebuild of the array. About 22 hours to rebuild in all.

After that's done. I'll plan to install my other 8TB drive. That'll take me from 20TB array to 28TB. Then I can add my two 4TB drives to boost me to 32TB if I want. I don't need it but I might want it. Braggin' rights and all. We'll see. Here are some screen shots to tide you over. When I finally button up the rig, I'll take pictures again. I have cleaned up the cable routing some but I left all of the dust. 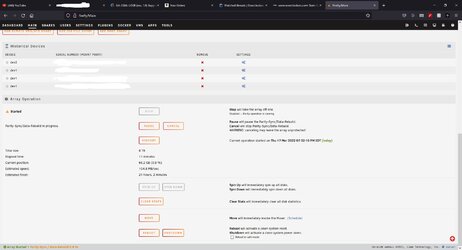 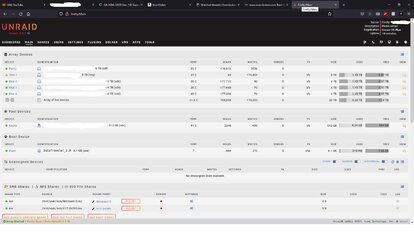 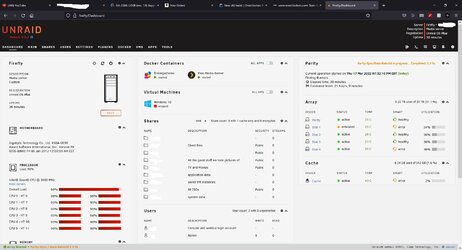 Last picture of my UNRAID. Drives turned around with connections facing the back side. New SATA data cables and good cooling going on. Clutter is cleared, dust is not. I gave it a quick wipe but I really could not care that much about it. Another reason I don't buy cases with windows in them. I want to run my machines not clean them. 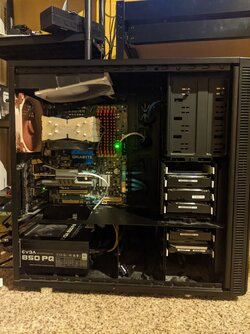 I have closed it up for now. I still have an 8TB drive to swap in but I'll hold off for now. In doing more thinking, I don't need 28 - 30 TB for media storage at this time. I'll take the two 4TB drives I took out and RAID them into my VR machine to get the most from them. Of course, I also have 2x300GB Raptors from the old days. 10k RPM could give me the best speed short of SSD. We'll see and I will post here. One machine down one more to go.
OP

The VR system finally has some real progress. I bit the bullet and headed into the black void that we call our basement. I cleaned and installed my old scythe Mugen 3(?). I powered it up and no picture. I was about to pull the CPU and install one that is compatible with older BIOS on this MB. Then I thought better of it and pulled half my RAM. That was it. I gave the BIOS a quick FLASH to a mid era BIOS and was able to install Win 10 Pro. The reason I thought to pull half my RAM is that I have two seperate 3 stick kits from different manufacturers. They may be less compatible than I had hoped. A higher level BIOS FLASH may take care of that or I may use different sets or leave it with the 12 GB DDR3 that it has now.

Knowing that pictures are worth more, I give you a picture of what will be my gaming area looks like for now. 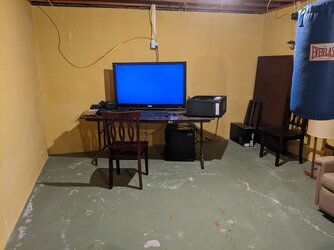 Some explanation. The floor was painted gray by the last home owners. Since they are the folks who built the house and we are the second owners, I'd say that's a safe statement. Then I used it to paint and stain various trim and other projects. The floor is not insulated or water proofed. In posts above, you see that we had the walls water proofed and insulated. For the floor, since we are mere inches from the water table, we will not remove the floor and insulate from there. Instead, I will put down dimpled plastic rolled product, insulating foam board and tongue and groove plywood.

Then I will put up 2x4 walls, run proper electric and more insulation and drywall. Finally, lighting and carpeting and sound wires, etc. It will be a proper room at some point, just not now. You can see a lazyboy type chair in the bottom right of this picture. I am standing at the back corner of a couch. The medium bag (punching bag) will have to move as I get ready to install the VR headset cable management system.

This project is at least a year and probably more away from being done. The basement is not our top priority. We are looking to pay off some of our large loans, Student and Mortgage which pulls any money for this project. In the meantime, I will clean up what I do have installed and maybe put a piece of scrap carpet on the floor to make it nicer on my feet.

VR and Xbox 360 (I know, cutting edge) and some TV viewing when I want to watch Highway Through Hell and the wife wants to watch Housewives of some city. With the computer on this old TV and a Chromecast, I can watch whatever I would like except over the air TV. I may do something for that too just for the fun of it.

Anyway, the next update I will post pictures of the PC with the 3060 and 1080. Both will start the fold and will regain my place on T32 once up and running. Since I've been bitching about my production for years now, It's time to shine.

Edit: I need to get some romex staples to keep the wires up and out of the way. While it looks like a basement, I'd prefer it to look like a nicer basement.
Last edited: Jun 13, 2022
OP

I'll probably be ready to off-load the 5690. I'll DM you for your address. Not a sale. Consider it a permanent loan.
OP

I was just thinking. While in this phase, I could start playing with the lighting. Untra thin LED can lights, dimable. Mood lights maybe? I don't know. Lighting is not an area that I understand. I have always done the, "if there's a light socket, then install the brightest bulb I can find in it". Probably more harm than good.

If anyone has any idea of the general rules for lighting, let me know. I'd like to start learning and fixing it all over the house actually. Too many uber bright spots and shadow areas.
OP 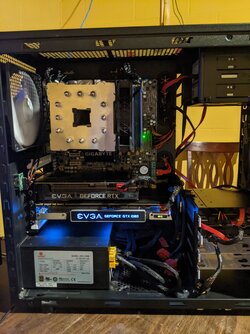 Well. It happened. I finally buttoned up the case on my VR machine. I've owned this case for a lot of years. I've used it to house one of my Folding Farm machines and never put the sides on it. Last night I got Windows installed as AHCI instead of IDE. I then installed the USB 3.0 card and see that everything is still happy. Side panels went on. I installed Folding and got it going. Look out for what that may do. I also installed Steam, the VR steam thingy, Skyrym VR edition, Space Pirate Trainer, and a few smaller VR apps. The fun part is that everything is on a 60GB SSD. Yep, 60GB for all that. Oh, and Plex so that I can stream from my UnRAID server.

I have a larger spinner on the machine but stopped short of formatting it and using it as I realized that I misplaced my old server drive with a lot of important information. I need to go through my spare drives until I locate it.

I do have a 256GB SSD that came from the wifes old laptop that I can toss in there too. I may just do that and move my Steam games to it. The bulk of my games will still be on my main rig upstairs so I just need room for VR stuff.

Now I am finding that this new setup is loud as hell. It's louder than hell but I can't type in the words that its as loud as. So I am looking to move the machine to the other side of the internal wall and run a longer HDMI cable to the TV and such. I have a wireless mouse/keyboard that will work fine in this configuration and the HTC Vive that I have is the BE version meaning that it came with a mile of cable for business use so that will not be an issue.

I still have very minor things to do like move the working drives to the SATA ports that are actually SATA III and not SATA II and other stuff like that. Nothing that really amounts to anything other than squeezing every last drop out of the X58 platform.
Last edited: Apr 21, 2022
OP

I'll get some final pictures but I finally finished the VR build. I ended up putting the larger 1080SC on top and the much smaller 3060 below it. Instead of having the 1080 block all airflow to the 3060 that I'd have the 3060 get fresh air and only block about half the airflow for the 1080. Should make all hardware feel better.

I also looked up which SATA ports are SATA III. Ports 0-5 are SATA II, ports 6/7 are SATA III and ports 8/9 are SATA II with RAID options. I put my main SSD and what I will eventually format to be my gaming SSD on the two SATA III ports. I have two optical drives (because... why not?) and a 2TB HDD on various SATA II ports.

Finally, I moved the computer to the other side of the block wall. I have it on a shelf directly under one of my main switches for the house. It is directly above the UnRAID server from this thread too. I need to clean things up. For example, I had a really long network cable that need to go away and a better sized one in its place.

The larger SSD which will house my games came from my Wife's old laptop. While I probably could just format it and use it, I thought I'd best back it up then format it. So that and a general cleanup of the server area is all that's left for this project and not worthy of further note.

Like I said, I'll get some pictures of the final setup and configuration. It's been a fun project to deal with these X58 chipset computers that were once the best of the best. I had to recall a lot of stuff from back then.

Glad you wrapped it up. Can't wait to see some pix!
OP 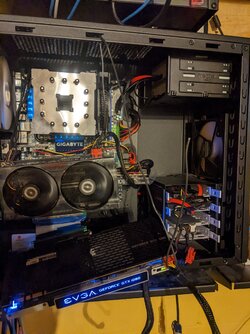 Here is the current picture of my VR machine. It no longer has the side on the case and it is no longer clean looking. I have three GPUs in here. Due to the tightness on the MB, I used PCIe x16 cables to pull them out. Unseen is a 3080. Then you can see the fans of the 3060 and hanging off the bottom is the 1080 SC. All are in a different room than my gaming setup with long cables to keep the noise in the shop area and away from the future theator area.
You must log in or register to reply here.

SOLVED Ubiquiti and I are not seeing eye to eye...