Towards the end of 2018, I noticed that memory and SSD prices had reached the level that it became irresistible for me to build a new machine. The 9th gen Core chips had come out, but I saw that there was a lone binned 8086k on Siliconlottery.com calling my name. It was specced for 5.2GHz on water and an obscene 1.4+V. I had already acquired a case, PSU and the necessary gear for a new custom water cooled loop, but I decided to see how far air cooling had come. Leave it to me to buy a new case and power supply with nothing to put in or power it.

Gigabyte Z390 Aorus Master - selected for the beefy power section, ESS Sabre DAC, gold plated audio connectors, dual 8-pin CPU power, and front USB-C. Very good aesthetics, integrated IO plate.
Intel 8086K - Silicon Lottery re-lidded chip.
2x16GB G.Skill Ripjaws 3200CL14 - tight timings, good OC headroom as stated by Woomack. Recent price drops made this attractive.
HP Ex920 1GB M.2 NVMe - good upper end mainstream SSD, nailed it for around $170.
Nvidia RTX2080Ti Founders Edition - I wanted to call this a pseudo-budget build because of the memory and SSD, but who am I kidding. I preordered this card on release day. I tend to hang on to GPUs a very long time, and before it got swapped into this machine I benched at the upper end of Sandy Bridge systems with it. I'll take it.
Be Quiet Dark Rock Pro 4 - pricey but very capable air cooler, if the reviews were to be believed. I intended to test it.
Seasonic Prime Titanium 1000W PSU - a bit overkill, but very nice unit.
Fractal R6 Gunmetal case - selected for low noise characteristics and water cooling expandability. Utilizing all the stock fans.
Windows 10 Pro - finally had to surrender to this operating system unfortunately.


The end results are pretty amazing. The system is far quieter than my water cooled Sandy Bridge 2600k, which has a watercooled CPU and power regulator section. On idle it is the quietest thing in my office. My NAS is noisier. On 100% load, with all the fans on automatic control, the noise level is very low hum. If gaming you would never notice it. The noise output is so good that I will not let the audio side of it go to waste at all. The Dark Rock mounts far more solidly than I would have expected for a two pound heatsink. Temperatures on non-AVX loads are very impressive. I'm still tuning the AVX side of the stress testing, but it will do 5.0GHz on non-AVX easily. I think 5.2GHz will be easily done on .1V less than Silicon Lottery specced it for.

Pics (don't ask me why, Irfanview is not saving my rotated photos....frustrating) 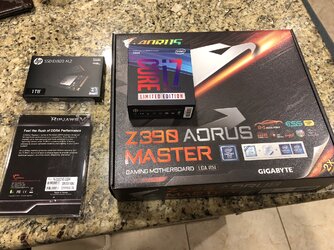 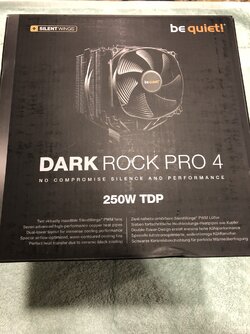 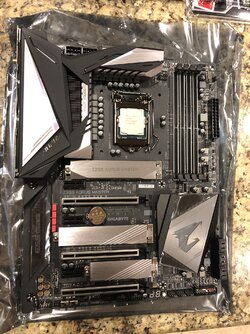 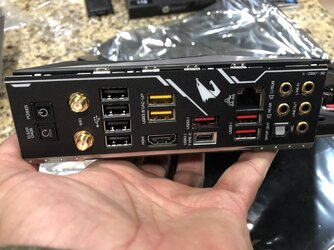 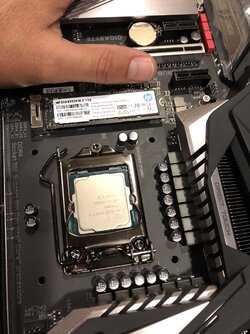 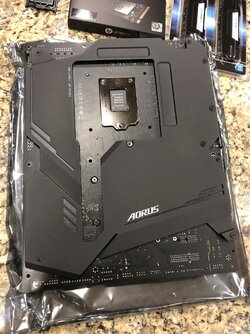 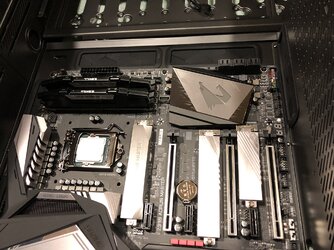 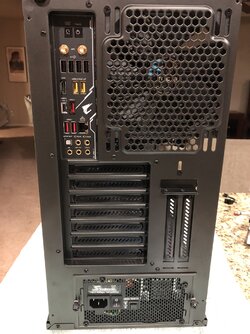 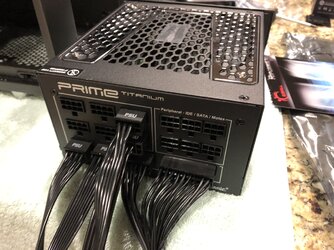 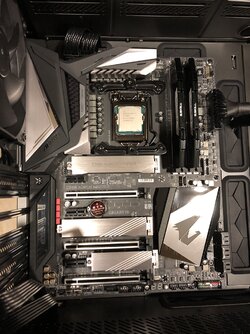 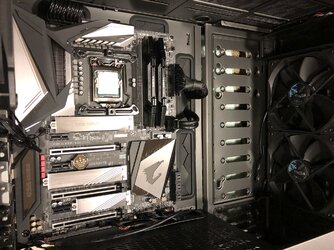 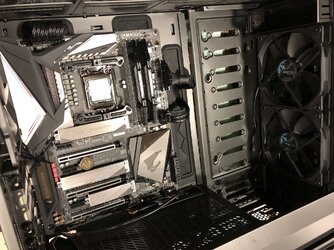 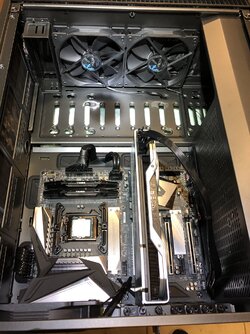 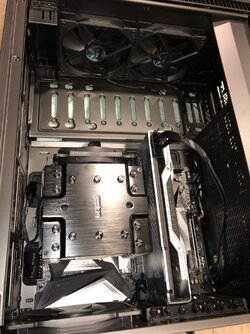 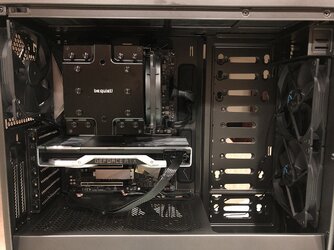 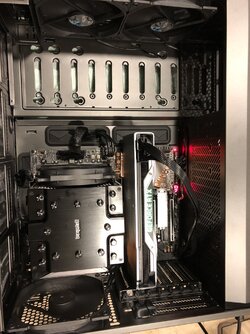 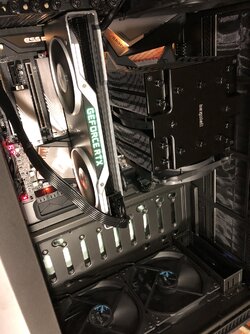 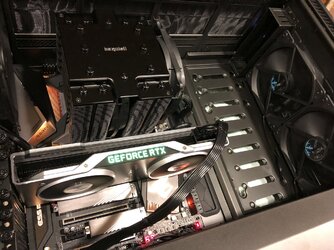 Looks wonderful!
That mobo is so neatly enclosed, doesnt even need a case! Taco would hang her on the wall instead

Thanks, guys! Had to show off a little bit. I'm really impressed by the build quality of this Gigabyte mainboard. My other machine has a Z68X-UD7-B3, and it is nice, but not THIS nice. The board is far more solid for overclocking, too. My first GUI bios, too. Pretty nifty.

Forgot one of my favorite shots. 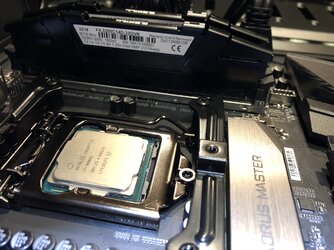 Ordered up a pump a couple days ago. Still gunning for "very quiet" so I went with a DDC 3.1. Block will be an Optimus V1 and the radiator a Blackice Nemesis GTX280. I have 4 Noctua 2000rpm 140mm's for push/pull, but I'll stick with the Fractal 1000rpm fans to start off with.

I can't stabilize AVX on this chip even at 4.5GHz because of temps and thermal runaway. Time to see if my custom water loop can tame it for the same noise.
Last edited: Feb 13, 2019

I was in the same boat recently. I just built a new rig for the first time in a while. My mind was blown when I discovered it had a GUI BIOS that had mouse support :lol: I felt so out of my element!

Update. Didn't like my temps under quiet air cooling, so after some issues (radiator flushing fun) I got my H2O loop in.

Spent the morning flushing, bleeding and reassembling. Use hot vinegar to soak it, then flushed thoroughly with tap and distilled, followed by the final 70/30 distilled/glycol coolant. Took some doing to get the air bubbles sufficiently bled due to the lower flow rates on this pump, but I managed it.


I really like the look of the Optimus with the mainboard. The reflections of the block, heatsinks and PCH go nicely.


I call this a total win. I ordered some 140mm foam fan gaskets to better seal the fans to the radiator since there's a 2 millimeter gap or so. 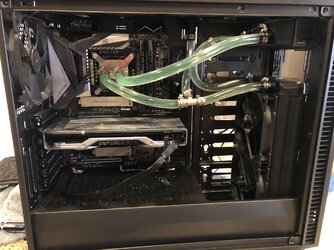 Nice upgrade, those 8086s get hot! If you're up to it those can benefit from a de-lid with new paste. Start reading at the OC section this was using a 360 EK Predator. https://www.overclockers.com/intel-core-i7-8086k-40th-anniversay-cpu-review/
OP

It is a delidded chip. Got it binned from SiliconLottery.com for 5.2GHz.

Now it's time to get it there.

Awesome, enjoy! Should be a screamer Ha Ha
W

With the new water set up, I'm running AVX seti tasks at 4.8GHz with no offset now. Temps in the 65C range. Prime AVX will push it to mid 70s, but stable.

Next up is to test 4.9 and then 5.0. Got radiator gaskets in the mail to make sure I'm pulling all the air I can with no leakage.
W

Thanks. This custom loop is really going to let the chip stretch its legs. Let's see if I can do a better, cooler job than SiliconLottery did.
OP

I tried 4.9GHz last night and even using up to 1.36V it can't push the AVX units in Prime95. Temps went to the mid-80s. Any fine tuning of other voltages I might try?

Also, use an AVX offset.
You must log in or register to reply here.