New Setup, Need council on OCing. Am I maxed out or can I try diff settings?

Did you ever try stress testing and see if it passes at stock settings with all that memory? How about at the memories rated speed with stock cpu?

Just out of curiosity was that ram kit bought as a 32gb kit or did you put 2 16gb kits together to get the 32gb.

on stressing at stock, we almost allways start at stock and work our way up from there,
if it won't do it at stock it sure won't do it overclocked.
I have had a number of fx that will not run 4 stick of ram and that disliked over 8 gigs.

furthermore, these chips arent designed to run with 32gigs of http://www.newegg.com/Product/Produ...listix_Elite_DDR3-2133-_-20-156-093-_-Product so even at stock clocks and voltages its not "stock" at stock. If that's not your ram, post a link to what youre running.
OP

Ah gotchya. Ok well here's my results after 2 hours of testing. I was successful at 4.5GHz, 1.55v, and a nice max temp at 51C. This was done using only the multiplier as requested I try instead, using all 4 sticks of RAM at stock speeds and stock voltages. 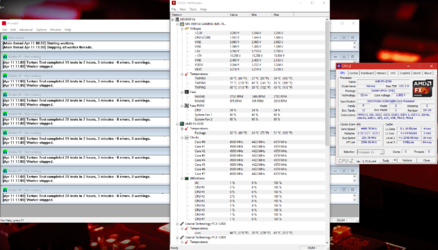 Next test: Pull two sticks of RAM and see If I can get a better clock at a lower voltage. This will only be to show the difference I suppose, as I do need as much RAM as I can get at as much speed I can get. 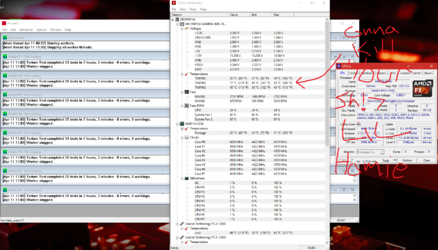 TMPIN1 on my mobo is either the NB which can get over 100C or it's a bogus readout. HWMonitor has that there by default and if there isn't a sensor on the mobo to send to that input it will just generate a BOGUS NUMBER. It always reads around 60-70 at idle too lol.

the IMC on your fx8350 is not designed with running 32 gigs of ram in mind at any speed. Hope that clears that up.
BTW on your board its probablty more like this.
TMPIN0 is MB temp, TMPIN1 is the socket, and TMPIN2 is your NB

guess I should have just bought an h80i, cause clearly i wasted a lot of money on my loop

Listen to them please m8, they know what their talking about try removing 2 sticks, reset everything to stock again and check the difference. I put a 80mm on top of the VRM's because I had 2x8gb 1866mhz and it was hitting ~80c. After fan ~50c and a stabler overclock

if it were the VRM temp it's still good. VRM's and Mosfets tend to have stable operation up to 130C, 85C is nice!

My suggestion is to listen and not throw back links at people... It may or may not be it, but you don't know, you are asking us, so it would behoove you to try anyway. The board is decent, but not many people that know AMD dont like most MSI boards for whatever reason. Its more effort to try than to poopoo advice, I know but... what else do you have to lose?
OP

Here's the specs I was talking about for the FX 8350

Total Combined Bandwidth:
Up to 37GB/s HyperTransport™ and Memory Bandwidth

Supports up to DDR3-1866
Supports low voltage memories of 1.35V and 1.2V
Up to 29.9GB/s memory bandwidth for DDR3
Pre-Fetcher improvements
Direct communications to each core in Dual-Core module (APIC registers in each core)

Test results to come soon! I'm shutting down and pulling two sticks, I would expect to see the 5GHz!

nice specs, but that temp scares even me, mine shut down at 90c and I only override it for benching at extreme clocks and my crap don't blow up any more.
ask the crowd, I am the vcore KING!!!

aweaver255 said:
Test results to come soon! I'm shutting down and pulling two sticks, I would expect to see the 5GHz!
Click to expand...

With an h80i ? I thought I was a dreamer

Total Combined Bandwidth:
Up to 37GB/s HyperTransport™ and Memory Bandwidth

Supports up to DDR3-1866
Supports low voltage memories of 1.35V and 1.2V
Up to 29.9GB/s memory bandwidth for DDR3
Pre-Fetcher improvements
Direct communications to each core in Dual-Core module (APIC registers in each core)

Test results to come soon! I'm shutting down and pulling two sticks, I would expect to see the 5GHz!
Click to expand...

For the record, nothing there shows 32GB. That is bandwidth they are talking about, not capacity.

I would definitely listen to these guys if you thought that was in reference to capacity.
You must log in or register to reply here.

R
How to undervolt AMD-FX8350+ASUS Crosshair V Formula-Z and Overclock?