Looks like Unigine will be bringing out a new benchmark. See the HWBot article below.

Never got why they didn't wrap Valley for the Bot ?

looking forward to it as well. should be fun. but bet it brings cards to their knees

Witchdoctor said:
Never got why they didn't wrap Valley for the Bot ?

11 hours ago – I don't think they liked our wrapper If they have leaderboards up for validation, we'll enable the benchmark on HWBOT too with validation like 3DMark.

Massman said: I don't think they liked our wrapper

If they have leaderboards up for validation, we'll enable the benchmark on HWBOT too with validation like 3DMark.

Cool, you guys will be able to compete on the bot with this then

Wonder if they plan to incorporate Valley in the same manner ?

Funny, I remember competing on the bot with 5 or 6 3D benches and 5 or so 2d benches

I wonder if they're targeting any particular API or hardware features... should be interesting regardless.

Ironically, it looks like Valley possibly don't stress as much as Heaven!

Looks like it will finally be released this Tuesday 4/11/17.

It is showing as 1.2GB and the download speed I'm getting would be considered poor on dial up so might not get to try it before I go to work...
W

I remember when benchmarks were made to show comparable performance in new applications and help to choose new hardware. Now it says nothing. I think that only Catzilla has option to tell if you can play some games based on your benchmark result.

Installing superpostion on my laptop at work right now... will test run shortly.

I've not followed catzilla closely, and although I think it had potential the paywall for even 1080p access limited it. They tried too hard in commercialising it in my opinion and that limited its adoption.

More in general, I wonder how benchmarks compare. For example, if a system is good at FireStrike, is it also good at TimeSpy? Catzilla? Superposition? If there are differences, what are they? e.g. making use of some features more heavily than others. Even without relating it in some way to actual gaming performance, if it runs well and looks good, I don't mind doing it for a bit of competitive benching. 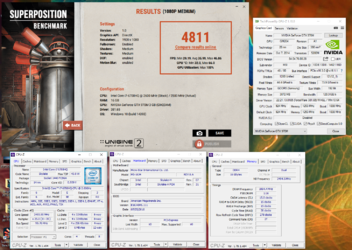 A quick result on my laptop... looks nice. On 1080p medium which it defaulted to on this system, I was getting around low 30's fps. There are several presets and choices...
Last edited: Apr 12, 2017
W

That's the point. You can't compare benchmark results to other benchmarks or games. There are too many variables on the way and the same settings in benchmarks may give +/- 50% FPS in games.
Catzilla isn't good benchmark but what I mean is that they were comparing its results to some games. On the other hand it's like you said, to check higher screen resolution you have to pay and this benchmark has couple of years how so no one will pay for it. I paid $5 or something when was some promotion but it was just after release. I don't know if I would pay now. Also I remember that some time ago one of the rules of hwbot was that global points won't be available on paid benchmarks and only widely available benchmarks will offer that. It has changed and for big part of benchmarks have to pay now.
Btw. Superposition is on hwbot now. Barely any results and no points but can add your results if you want.

I got 3DMark advanced licence as that was on sale, and similarly TimeSpy and VR Mark too (a dev was less than impressed with my negative review on steam ). At least the 3DMark ones run at a usable setting without paying, which is enough to get going. On Catzilla, to even unlock 720p you had to sign up an account from memory, although it didn't request that in later installs so did they relax that position? Still, 1080p was not available for free and I think that is where things start to get interesting.

Back to superposition, it seems to pick a preset based on hardware. As my laptop only had 3GB vram, it limited to 1080p medium. High seems to want 3.3GB or so, and you can force it to run after a warning. Want to see what this looks like once I get back to my desktop at home... the VR feature seems to require the paid version.
You must log in or register to reply here.

ummm...not newby for OC but been out for long time

maybe something to think about?