Not sure if this is the right place but wanted to share my latest build and track its upgrade process. I started with my old system which was housed in an old HAF X. I was running an old AMD FX 9370 which was watercooled by two 360mm (60mm thick) radiators (I previously had a AMD R9295X hence all the cooling power!). I was running 16GB RAM, and had recently upgraded to a GTX 1080 on air. Because of the size of the case I was mounting the second rad on the back of the case so I felt that an upgrade was in order to accommodate everything and to upgrade to an Intel Kaby Lake processor. So started a new build:

- First thing to say, this case was a joy to work in. Everything you see in the case is removable form the glass panels to every bit of metal so getting at hard to reach places is really easy. Similarly because it's so big and has pretty much half the case hidden cable management is really easy, especially for someone like me who historically wasn't great at it!
- The PSU placement is a bit weird. Because the case is square it means that a PSU like mine goes all the way back/forward towards the front of the case so that means that you need to push the cables into the case and if you need to change anything you need to take the full PSU out.
- The case is MASSIVE. Hopefully the picture next to my monitor shows how tall this this is, it also looks B-E-A-UTIFUL when it's all done!
- Everything EXCEPT the Corsair RAM is Aura compatible which is awesome. I probably should have gone G-Skill for the RAM but there was none available when I started the build on Amazon.
- I had a weird thing where the left RGB header always had the blue LEDs on which was strange. I ended up just using an RGB splitter for the right channel and that's worked fine for everything so far. Will see what it's like when I add one or two RGB GPU blocks as well!
- Air cooling the GPU is a bit weird at the moment. I flipped both case fans to be intake and then make the Rad fans exhaust but will reconsider when I've got the extra 360mm RAD on the go.
- I didn't realise how difficult it is to find a White fan controller capable of at least 6 fans (I expect to have 14 fans in total when I get the other rad done and get some more money to change the other rad to push/pull) so I just went with black in the end. Not great for the aesthetic but oh well!
- The mounting for the Rads means that I had to remove the drive cage so can only use the 2x2.5" and 2x 3.5" bays in the front. This is fine for me for now but if I need to expand it means replacing a drive rather than adding and you'd have to have a smaller rad on one side if you wanted to go RAID with a lot more drives.
- Once you put in the res/pumps they hide a lot of the cables behind them, this means routing for things like LED's is really easy to do.
- The back IO is in the lid of the case so it means pulling off the lid (with some force!) every time you want to change everything and means that if it's on a desk like mine is you need slightly longer cables!
- My MoBo only had 1 USB 3.0 front header so 2x/4 of the USB 3.0 front IO are unused. I don't have USB 3.1 which this MoBo does have so couldn't use that. Not been able to find a USB front header hub so if anyone knows of one please let me know as front IO is important because of the previous point!
- I'm planning on changing out the single 1080 on air for dual versions of the high end Volta card (hopefully with RGB blocks!) so I'll update this when I've managed to do that if there is interest?

So here are some pictures! I hope you like! And if you have any questions/comments let me know

P.S. apologies for the size of the photos! I tried to downsize them but it hasn't worked so if anyone knows how to do that let me know and I will! 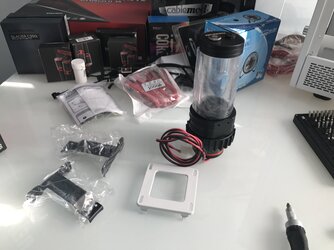 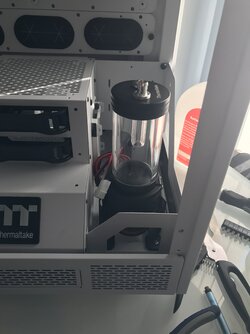 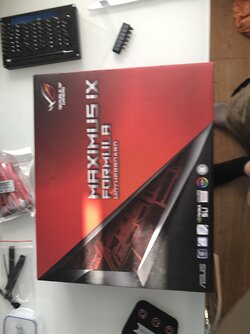 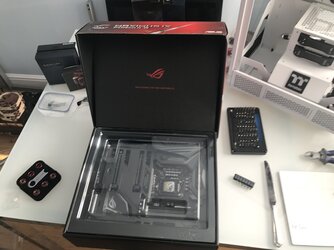 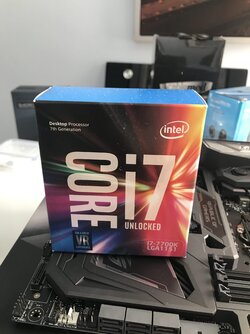 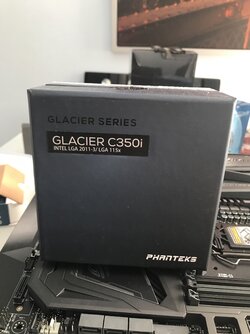 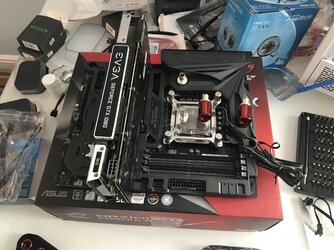 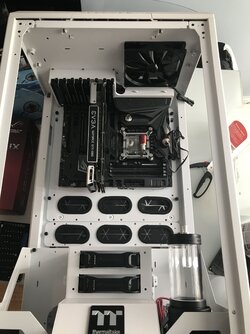 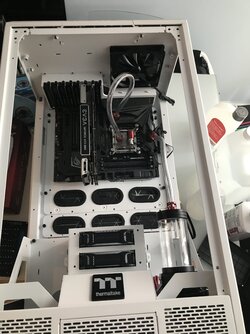 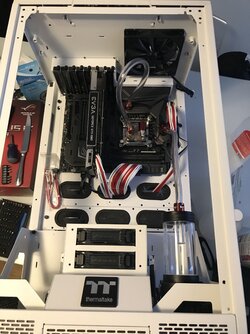 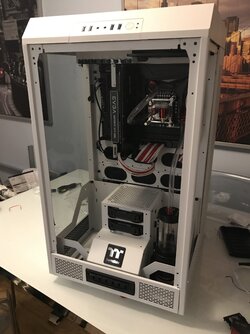 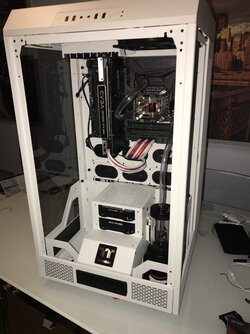 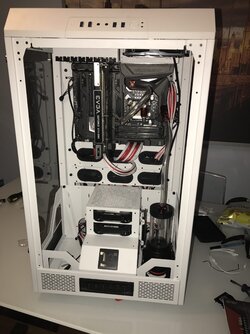 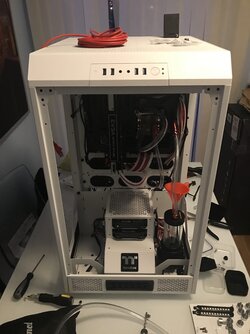 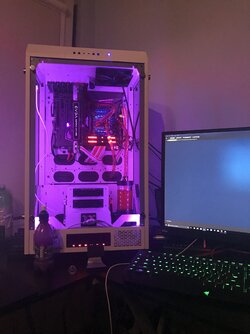 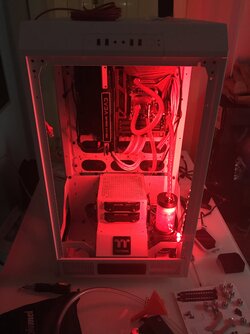 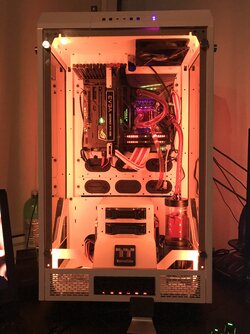 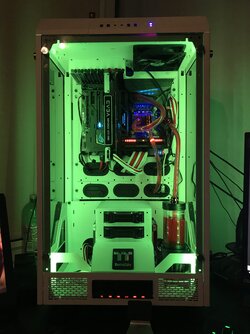 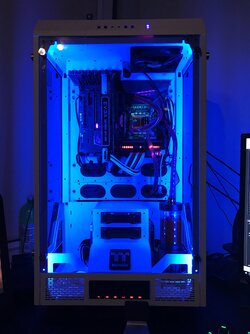 One helluva build! Enjoy it

When I looked over your pictures I started thirsting for this case. But I had ordered a Corsair Obsidian 900D before you created this thread, and my friend totally vetoed exchanging it for a Thermaltake case. Oh well.

What a beautiful build you have!

BobCochran said:
When I looked over your pictures I started thirsting for this case. But I had ordered a Corsair Obsidian 900D before you created this thread, and my friend totally vetoed exchanging it for a Thermaltake case. Oh well.

What a beautiful build you have!

Haha thanks Bob! 900D was the original case I was intending for this build. I only really changed because I'm vain and wanted the tempered glass (was talking to my friend who works with Fireplaces to see if I could get a TG side pannel manufactured for the 900D) and theTower 900 was a bit cheaper. I'm sure the 900D will be awesome (and tbh, think it has slightly better mounting areas for the rads and drive cages! Enjoy your build! What're you putting in it? Looking forward to your build log!

to OCFs! Don't mind me as I'll add a few questions and comments.

Will you be custom cooling this GPU or waiting for Volta (x2 GPUs in SLI)?

As for controllers, I would have steered you to the Aquaero 6 LT, much cheaper than their display versions (Aquaero 6 Pro/XT) as it could run all your fans, temp probes, etc and stay hidden for cable management, not taking a single bay space. Comes with full software control, etc. It's compatible with most things but just not all (flow sensors/pumps). It's a bit more complex and has a learning curve but just throwing that out there for future reference if someone was going to spend around $100 for a controller.


cliptags said:
- My MoBo only had 1 USB 3.0 front header so 2x/4 of the USB 3.0 front IO are unused. I don't have USB 3.1 which this MoBo does have so couldn't use that. Not been able to find a USB front header hub so if anyone knows of one please let me know as front IO is important because of the previous point!
Click to expand...

Same company that makes the Aquaero 6 which is called Aquacomputer based in Germany also have a USB and fan hubs for all occasions.
You must log in or register to reply here.