Hey All! I'm Josh from SC. I've built a few custom desktops over the years, as I was young my father was really into computers and always built his own, then he got into doing computer repairs. So I picked it up from him and learned from him. I fell in love with computers myself, my first PC I built was a win95 pc. But I never really got into Overclocking the components. Though I've never had the money to invest in top of the line of parts, but I got by in games I've played with decent FPS.

Now just recently I built me a new custom desktop as I got tired of console gaming, and wanted a decent desktop for my Guitar/Music recording and playing my guitar output from floor pedal into Line-In and USB/MIDI interface to edit effect patches and download other peoples patches. And at the same time have a good enough machine to run today's games. I'm playing " Elder Scrolls Online" "Battlefield 3" but now mostly "Star Wars: The Old Republic" .

Which brings me to wanting to try and get better performance, quality, and maintaining a decent FPS.
Below I will attach a .txt document you can open in notepad that I used "CPUz-ID" to save the report about my PC's Components. I've done a little research and downloaded some very useful Progs & Warez to help with OverClocking such as : AMD Overdrive, MSI-ControlCenter, CPU-Z (MSI version) , EVGA PrecisionX 16 , EVGA OC Scanner X , EVGA E-Leet Tuning Utility , Core Temp , NVIDIA GeForce Experience , and MSI SuperCharger (which I can't get this one to run).

PS I'm currently using a Western Digital Caviar Green WD10EADX 1 Terabyte (1TB) SATA/600 7200RPM 32MB Hard Drive for my OS, Progs, SW and everything, but my uncle just gave me a "Crucial M4 64GB SSD SATA 6Gb/s Drive" , and I also currently have a Free Offer to Upgrade to Windows 10 , I'd like to know if it'd be a good idea to install the SSD and have it as my Operating System primary drive, and somehow setting my PC up to where all the Progs & Softwarez & Games/Media are installed on the WD 1 Terabyte SATA HD. Or should I use the SSD to install my Main & Primary game (Star Wars: The Old Republic), and keeping the rest as it is now?

Thank you for taking the time to read my post and any help,tips,suggestions, & guidance you may offer. I'm so excited about finally having a Desktop back, I really love it so much and I'm a good student if anyone would be willing to help. If anyone is interested I have a couple chat programs that I normally use for playing my Guitar Live performances and listening to others, : Paltalk UnrealGuitarist ; Camfrog PhantomGuitarist07 ; Skype vexedvirtuosity07 Please feel free to add me as I like to meet new people and meet people that have the same hobbies as myself.
Thanks Again, and Merry Christmas! -Josh
OP
P

Hey guys Im just adding in that so far I've used EVGA's PrecisionX 16 OC Program after doing a bit of research, I first raised the Fan Curve by increments of 10% right now its at 2250 RPMs. Then did OverVoltage up to +37mV . Then I raised Power Target to 105% with GPU Temp Target to 95degree C . Lastly In slow increments raised my GPU Clock Offset to +150MHz & MEM Clock OffSet to 260 MHz. So far this is stable and if it stays stable after some stress tests and live gaming stress tests, I will leave it at these settings for awhile.
Can anyone please offer some insight about what I've OC'd regarding my GPU?
The next thing I want to OC is my AMD FX-6300 Black Edition. If possible I would REALLY REALLY be so grateful if someone could help me OverClock it up to 4.2GHz from it's stock 3.5GHz?
Please help me, any insight tips recommendations would be awesome. Thank you! -Josh
OP
P

Heres a ScreenShot I just took with "TechPowerUp GPU-Z 0.8.6" 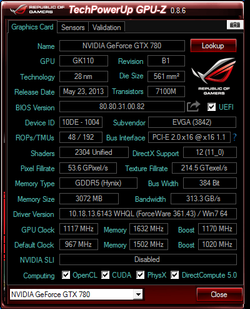 Is there anyone who can offer any information at all?

I would use the SSD to install your OS and as many programs as you can get on that small of a drive. Be careful not to fill up the SSD to more than about 75% at most or drive performance will be degraded. Use you spinner hard drive for data storage and programs that won't fit on the SSD.

As far as overclocking the CPU goes, just concern yourself with three variables: core speed multiplier, core voltage (we call it "vcore") and package temp. Download AMDOverdrive. It's a pretty good overclocking tool and the only tool I know of that will give accurate package temps for the FX series of CPUs. It also has a stress tester.

Start increasing the core speed multiplier in 1x increments until you can no longer pass the stress test. At that point, add .025 to the vcore and retest for stability. Proceed in that same fashion, bumping up the multiplier and adding a small amount of vcore when you encounter instability until you run out of package temp headroom. Max package temps are about 60c I believe and I think the AMDOD package temp readout gives you not the actual package temp but the "TJMax" which is the room you have left before hitting the thermal shutdown temp.

After arriving at a tentatively stable overclock using the AMDOD tools, use a more vigorous stress test like 2 hr. of Prime95 to confirm stability. Then if unstable either lower the multiplier or increase the vcore and retest. The AMDOD stress test is not rigorous enough in my opinion to establish a truly stable overclock. Keep AMDOD open when stressing with Prime95 in order to monitor temps however. After arriving at final overclock values you should take the multiplier and vcore values you settled on and plug them into the bios for a more permanent arrangement. Oh, make sure you don't have AMDOD set to automatically load overclock values after plugging those same values into bios.

Hey Thank You so much for taking the time to read my thread and for the valuable information and steps for me to take. I am really loving this build and am having a lot of enjoyment in learning about all the cool tweaks and things I can do with it. That Video Graphics Card is a beast!
Soon I'd like to learn how to live Stream whatever game I'm playing. Thanks again and Merry Christmas!
You must log in or register to reply here.

L
I think ive messed up my over-clocked PC..