My problem is that the current RAM is made for intel, but I have some great posts about it on AMD builds:

And here is the stuff I just got in the mail, for some reason Nwegg just deactivated the item, and it does run a bit hot: 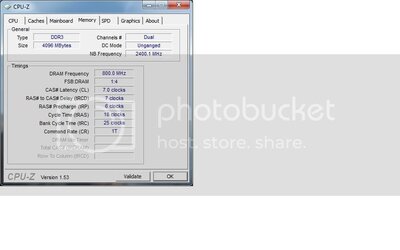 Whats the problem here? Memory isnt AMD/Intel specific. Personally, I would be MUCH MUCH more worried about the Rosewill brand PSU than I would your ram. Friends dont let friends buy Rosewill PSU's.
OP
G

EarthDog said:
Whats the problem here? Memory isnt AMD/Intel specific. Personally, I would be MUCH MUCH more worried about the Rosewill brand PSU than I would your ram. Friends dont let friends buy Rosewill PSU's.
Click to expand...

Is it unstable? I have had it for almost 3 years now w/out a problem.

I have read numerous places where people sort of shy away from memory thats listed by manufacturer as built for I5 and I7 systems ...like the Gskill.

I didnt see a question. In fact, there isnt one directly listed. I saw you had a concern about Intel memory on an AMD system, and I DID quell that concern that by saying, "MEMORY ISNT AMD/INTEL SPECIFIC". If I missed an actual question, my apologies. If you can ask it directly, I hope to help.

Rosewill is a garbage brand PSU and is known for self destruction, not being able to output its ratings and potentially taking out a system while its at it. The older it is, the more concern I would have with it personally.

Return the memory, either one (preferably the slowest, meaning lower speeds and higher timings) and consider your PSU as your next piece you should upgrade. See the link in my sig to known good PSU's. You should notice, Rosewill is on the **** list nearly everywhere.

Thought I had written a question in there, but thanks for reading my mind. I think I might just stay with the Gskill Trident then. They are both equal in price, but it seems Mushkin is no longer making that RAM but has prelaced in on newegg with stuff that runs at 7-7-7-20 1.5v and costs $35 more.

Why did Gskill put a big sticker on the packaging that says "Engineered Specifically for Socket LGA1156 Intel Core I5 and I7 CPU's"?

gmoneywp15 said:
Why did Gskill put a big sticker on the packaging that says "Engineered Specifically for Socket LGA1156 Intel Core I5 and I7 CPU's"?

To take business away from other manufacturers. The "general consumer" buying i5/i7 might think they need the G.SKill just b/c the other brands don't state "Engineered Specifically for Socket LGA1156 Intel Core I5 and I7 CPU's." The more computer-knowledgeable consumer will know better.
OP
G

Its on your list, I read johnnys review, its modular AND cant beat that price.

and sent the Gskill back, kept the Mushkin Blackline...came down to a coin toss

gmoneywp15 said:
Just got this:

and sent the Gskill back, kept the Mushkin Blackline...came down to a coin toss
Click to expand...

You will have twice the power you need. Good purchase!
OP
G

EarthDog said:
You will have twice the power you need. Good purchase!
Click to expand...

Thanks, And thanks for the help. I actually just sold all my old AM2 stuff off for $180 and thats what I used to buy it.

As far as twice the power I need, I realize its overpowered but when I toss another GPU in there and two more SSD's and possible watercool down the road, I feel better knowing the 850W will handle it all.
Last edited: Dec 31, 2009

I would get 955BE instead personally.

For Crossfire of two GPUs, two gtx260's for example, a 650W would be fine (though most would say 750W). SSD's dont use JACK for power and water is probably no more than an extra 50W with 3 fans and a pump. I wasnt knocking on the purchase at all though. You just could have gotten away with less, especially if you werent planning on SLI.
You must log in or register to reply here.