Temps arent the issue on titans, the issue is the immature buggy bios of these cards and resulting over aggressive power throttling. 17 bios mods and flashes later (most edits of naennons bios which is only one where cards follow bios power limits) and Im 1200 mhz rock stable, no throttling with 1.2 vcore, in any 3dmark benchmark or modern game so far.

now that 20+ hrs of bios modding/testing to learn how this buggy bios works...and throttling resolved (thanks to naennons supplying bios that everyone can edit to their needs)....im able to test different volts and see if I can have 1200 core at lower vcore. Or if I will do 24/7 at 1150....havent even touched mem yet, burned out on bios flashing/testing.

nvidia is supposedly working on a fix...but what a pita it has been. Mine on stock SC bios, despite on EK wb/backplate with gpu temps never above 35C, throttled so badly on any benchmark like fire strike, it was going near stock. On very light 20% load, it was up near 1200mhz...at stock...screwy... now way was I exceeding the bios specified power limits on my stock bios, they were just being ignored. In fact my stock bios specifies core boost of 1254 limit...not that my gpu gave a flip about anything else my bios specified either, until flashing to naennons, at least the card follows the set power limits with his.

I just wanted a single gpu for my 27 inch monitor, no sli.....I like the card, well now that mine is an ok ocer and no longer throttling, but these bioses are still immature, and still dealing with bugs...like have to use precision X (software) to tell the card to follow the bios .

ended up with 2 possible solutions, but to avoid long post, im opt33 here

Based on Hokie's review, he got a much better gpu throttling wise than mine, as did many reviewers, as did some others win the throttling/leaky gpu lottery.... though many got the throttling disease like mine...or very leaky ones like mine. Looking at Hokie's review, his stock fire strike run was 8754. That is about where my stock run was, and my OCed one was barely higher...because mine throttled horribly down to near stock with normal benchmarks like fire strike...for which this gpu should not throttle. Granted if exceeding 300W hard limit, like running furmark, all cards would throttle to stock, but normal gaming far cry 3, my card throttled horribly.

Bottom line, if buying a titan, either win the lottery for throttling, wait for nividia to fix/improve the problem as they said they would, or play mod/flash the bios.

here is my pic with non-throttling bios in fire strike, 3dmark11 (attached precision graph showing steady 1228 core under load), so with less buggy bios, can hold rock steady 1228 core, +280mhz, 1.2vcore, and since card has a hard limit of 300W, im not above it. Using exact same power limits as my original bios specified (though my bios was ignored b/c bugged) except with naennons working bios, I would not throttle until 1150, but I raised the soft power limits only 30W from my stock bios (from 250 to 280) and now not throttling even at 1228. 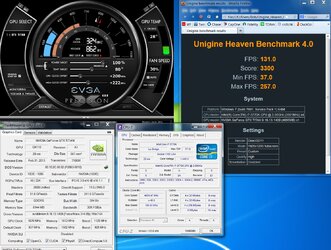 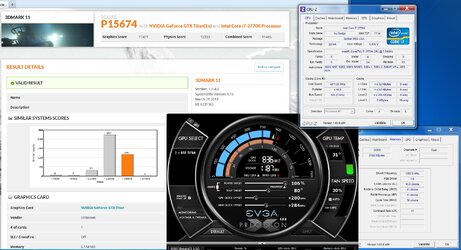 Thanks rge, for giving us the info on this throttle issue, sure hope that gets fixed.

That,the high temps and price, kinda puts me off on this card, maybe future cards will look at these issues and have them running better.

Remember, high temps with the default fan profile are by design. It is a very cool running gpu if you make only moderate adjustments to the fan profile via software.

"Official" engineering BIOS and volt-mods: http://hwbot.org/forum/showthread.php?p=233463#post233463 . Note the warning about the weak VRM and disclaimer about no responsibility. That applies for us too.

wow, those are some tiny points/resistors/etc that would need to be changed if I read those instructions correctly.

Hard mods, too much risk for me, (and not a LN bencher). But very interesting to read.

the bios they have listed there, get an error message in keplar bios tweaker 1.25 while opening it, will make me stay away from that one, and it is mostly not readable...except the power limits increase..and there are tons of edits on bioses that dont give errors for that.
You must log in or register to reply here.