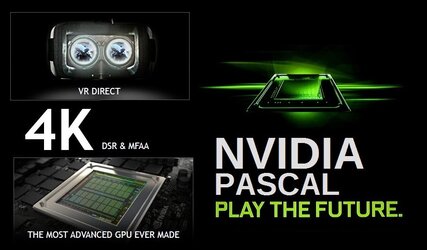 Looking forward to seeing how well they perform.

I think I just heard Taps playing over at AMD...
OP

JrClocker said:
I think I just heard Taps playing over at AMD...
Click to expand...

Until Polaris 10 comes out (earlier perhaps)... and Vega. Don't count your chickens before they are hatched.

EarthDog said:
Until Polaris 10 comes out (earlier perhaps)... and Vega. Don't count your chickens before they are hatched.
Click to expand...

It's all about market share and cash flow!
OP

We'll see what David brings to the table...


... though I am not holding my breath. AMD is a marketing machine, but tends to under deliver.

David of David and Goliath (AMD and NVIDIA).

(I knew that was a reach!

Ehh, that is the silicon name Wingy... not the retail channel name (what we will all call it). Silicon has been like that for ages in fact.

every time NV releases a new gpu someone always says AMD is done. people use to the say the same for amd vs intel, yet they are still around. for the price to performance amd is as completive as it can be. the different approaches of the gpu arch give them strength in different area's. no one arch type is stronger then the others in performance per say. with the lack of OGL games in windows it something we dont see any more. im thinking it might still be the same but NV always had higher fps in OGL games vs amd, not by a small margin either.

anyway since all games are D3D now im sure nv has made changes to get more performance from those types of engines. with driver tweaking to lower quality in certain areas of the game we wont notice offers more performance that wouldn't be there if they just focused on quality all the way.
Last edited: Apr 13, 2016

How much do you guys think the 980s successor will cost?

If there are any that are hoping that AMD dies, you either like paying a fortune for a GPU, or you REALLY don't understand how they help to keep NVIDIAs prices competitive.... Personally, I hope AMD hits a homerun, not only with their new GPUs, but also with Zen, when it finally releases. And if you were smart.....so would you.

Right now we can see that Nvidia is bumping prices and AMD is comparing their products to Nvidia so is also bumping prices. There are too many people who will still pay for overpriced cards so why they should drop prices ...

I'm not on any side and I could get AMD graphics but I just wish to see something with a bit faster GPU than GTX960 with 2x wider memory bus, 4GB memory and 100-150W real power under $270. When I say real power, I mean that peak wattage will be 150W, not only unrealistic TDP which is always specified ~20-50W lower. So card like that could be installed in small ITX case without overheating and would be quiet while could run all games in max details at least at 1080p ( and most much higher ).
All that 4k, VR etc is interesting for maybe 5% users. All others will still play in 720-1080p for next 2-3 years. I would be more interested to see higher performance but cheap mobile GPU as current series are useless up to GTX960m and these are in laptops that cost $1k+. Most lower GPUs can be replaced by Intel IGP so I'm not sure why are they even existing.
Last edited: Apr 15, 2016
W

SniperJF said:
How much do you guys think the 980s successor will cost?
Click to expand...

Is that a guess or do you have a source?
W

It was a best estimate of former prices through the years.

Great. Another line of GPUs while I'm in a tizzy over what to get. Can't we just have good , gooder , goodest?
You must log in or register to reply here.

The Benching Team needs your Help! (Prizes too!)
2