I usually overclock my pc, but just to get a little boost.
A built a new pc and would like to get some tips from you guys. 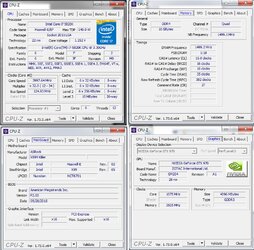 I ran some stress tests and its going good so far.
I like to use this settings 24/7, what do you guys think about the voltages? I don't want to push it too hard.

Voltages should be fine for 24/7. Think I saw a thread on here where it was recommended to keep it under 1.35v.
OP
S

Last night I couldn't turn the pc off, the fans was still on and the monitor off.
Today tried to lower dram voltage to 1.32 and vcore to adaptive mode (set to 1.25v), but did not boot like this.
So I put the vcore at override mode and dram voltage back, its working but doesnt turn off

Define "doesn't turn off" please. Like "Windows won't shut down", "Can't turn off PC by holding the power button", etc.

You did not post any of your temps, nor tell us your PC specs. Please provide a complete list of your PC specs.
Click to expand...


Windows won't shut down, but if i hold power button, it does.
Here is the PC specs and temps:

Your load temperatures look good. What where you using to stress the CPU to generate these temperatures?

I have 2 thoughts for you:

1. Your BCLK is at 125 MHz. I have a different motherboard, but I had difficulty getting my system stable when I used a 125 MHz BCLK.
--- I ended up dropping the BCLK to 100 MHz (your CPU ratio would be 40 then), and set my memory speed to 2666 MHz (even though it is faster rated RAM).
--- After I was comfortable that this was stable, I adjusted my RAM timings down (used the ratio between rated RAM speed and RAM speed at 2666 to adjust timings...rouding up first, then down) to get some of the RAM speed back.
--- In reality, you won't notice much of a difference between 2800 and 2666 on the RAM speed.

2. Have Windows (don't know whether it's 7, 8, or 10) do a repair/check on the OS. See if that makes it work better.
--- Have you ever tried to let the system shut down (like wait 30+ minutes)?
--- If it's Windows 10, you can create a USB bootable drive with the install on it, and then have it repair the install...outside of Windows
OP
S

I use RealBench to stress the CPU.

2. After this, restarting/powering off is fine, I'm still using Windows 7
Now I will work on some tests so check stability and then try reducing the timings and vcores


EDIT: Its funny because I ran a bench test and last time got around 94k points and this time got 96.5k 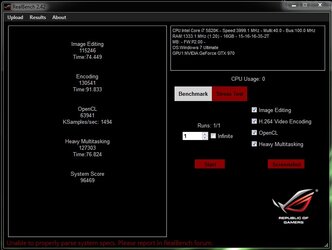 I'm glad it worked out for you!

try lowering vcore to 1.2v and cpu to 4375mhz. that's where mine ended up.
You must log in or register to reply here.