Hey im new here and in the oc'ing world.

now i have had some assitence from people who have oc'd them self, but i want to learn as much myself.

Been reading trough a lot of forums, and was able to oc my cpu a great deal for air.


But, and here i need help, i oc'd a bit to much, couldn't boot so resetted cmos.
system workd fine again BUT now i have some strange readings.

in my bios, i can set a maximum multi of 23x
but the clock itself says its at 24x 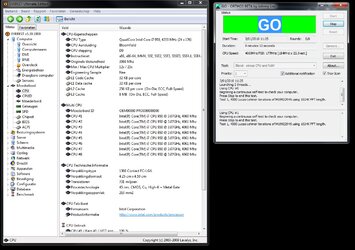 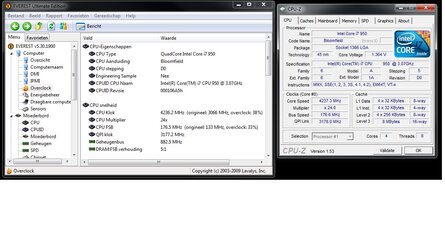 So i dont know how much its going at.


Second question is a more detaild question to oc'ing it self.

I'm just trying to grasp how oc'ing works IF you dont have to worry about heat.

So i'm i right, to up my voltage to when it doens't crash? ( ofc not going to high to give me a meltdown :d)

or are there to much other settings i need to understand not to get bleu screens.

My current other oc settings are

If you need any more info just ask.

thanks in advance for the help, and sorry about some faults in my English its not my native language.

Use RealTemp for monitoring multiplier and temps on your Nehalem (in that zip file you have a tool called i7 Turbo, very useful for watching multipliers). Sometimes CPU-Z is not showing correct multiplier and Orhos is old.
If you want to load all of your 8 threads use prime95 Large FFTs or LinX if you're brave.
OP
S

k thx,
but like i sayd, i dont understand why my bios says what is says

but i wil test both programs, already have prime instald but havent looked at it yet,

anyway thx for the info
Spiney out

edit: nice, with your i7 turbo prog, it says its running at 24x, real temp witches betweetn 23x and 24x, but i see i7 turbo, going just a bit below 24x and then realtemp changes together,

so i have a stable system running at 4236.3 mhz woot, not bad for my first OC it think

but stil any help/advice how to get higher and staying stable wil be welcome, i just want to know a bit more then what i do now

My temps at max torture = around 84°C (185°F) so, i think this is the highest i can get, but i stil need to fine tune my VCC sinds its at max,
Once i get the hang of this i wil bring it a bit down to normal temps, but i want to know what i need to tune sinds, regardless of the temp, its not stable if i go higher at clock speeds.

Dont get me wrong, i do understand that more volts means more heat, especialy on quad cores, but stil IF i would go to water cooling, i want to know how far i can go, (if i go like to 1.8V is that a instant meltdown, or just only if you can't cool it?
Last edited: Jan 3, 2010
You must log in or register to reply here.