After going through nearly 3 years of Zen, Zen + and Zen 2, the Zen 3 cluster-F drove me back to Intel. AGESA issues, CPU bugs and Motherboard issues confirmed AMD is back to it's poor QC past. Now WCCFTech, a big AMD promoter/fan site, has posted this:

I saw that post kick off on twitter yesterday but if more are reporting it, it should be a concern for AMD. Even before Zen 3, I did feel AMD were running close to the edge more than Intel does, which is not to say I haven't had problems with Intel either. On both sides I think it could be attributed to mobos more than the CPUs in my case. If the CPUs were the root cause, that would be an escalation for the worse.
W

In the last ~2 years, I had about as many issues with motherboards/BIOS/AGESA on Intel as on AMD. It's a matter of motherboard and manufacturer. I highly doubt anyone had problems with higher series motherboards as for example there were no issues with the ROG series since release. The only thing which was worse on the AMD side was how some CPUs were acting and random luck with IF/IMC quality. I had maybe 30 Ryzen 3000/5000 CPUs in tests and not a single DOA but 2 couldn't even boot with memory above DDR4-3200.
I don't believe in so high DOA rates for Ryzen when I haven't heard about a single DOA CPU on popular forums or from local distribution. Maybe they had bad luck or faulty batches in some deliveries. It's really hard to say and I wouldn't make a rule out of that. I won't even mention that for the first time I hear about something like PowerGPU. Their CPU numbers are also pretty low to make statistics out of that.

320 units while not massive is not tiny either. Based on what's been said so far, I'd lean towards this to being a bad batch of Zen 3 from AMD. That could explain why it isn't more widespread.
R

DaveB said:
the Zen 3 cluster-F drove me back to Intel.
Click to expand...

I'm curious to see where that failure rate goes, this is the first I've heard of it.

All sorts of theories going around. On one side we got those trying to pin the blame on the system integrator. They've apparently been in business for 20 years so I'd hope they know what they're doing if they're still around after that long. Personally I'm leaning towards the "bad batch" theory. How it happened, we might never know. Doesn't seem like a widespread problem but might be worth giving it another day or so to see if anyone else makes a similar claim.

"While a certain amount of defective units is to be expected when bulk buying, PowerGPU’s numbers are worryingly high. However, before we go any further, it’s important to note that this is an unsubstantiated claim from a single source. It should also be noted that the original tweet was deleted, which could mean PowerGPU has backtracked on its claims."

"Hardware Unboxed tweet : Speaking with major Aussie PC parts retailers I've been told the failure rate for each part is normal and under 2%."

""AMD is looking into a claim by a custom PC builder regarding higher-than-expected failure rates they are experiencing with Ryzen 5000 series desktop processors. We are unaware of any similar issues at this time." - So, AMD is certainly taking these claims seriously, though it doesn't seem to be widespread for the moment. We'll be keeping an eye on this."

PowerGPU deleting the tweet might include following: 1, they didn't expect it to blow up so big and it was causing them the wrong sort of attention, and 2, it is a nice thing to do while they sort it out directly with AMD. I did see their tweet saying they were talking to AMD.

We just had a chat with AMD. We are going to work together testing out some CPUs and motherboards.

Implication: they probably buy the CPUs through distribution, not direct from AMD (probably limited to really major buyers), so they might not have had direct contact into AMD before.

I just bothered to read the Techradar "article", doesn't sound like they know any more than we do and their claims beyond known facts are no more than random speculation.
Last edited: Feb 15, 2021
W

Afaik, you have to be an official distributor or a huge PC manufacturer to buy directly from AMD. Somehow I doubt they are and they probably got it via distribution. Just my thoughts. Considering their listed quantities, it looks like some of these processors were from a single delivery (typical 20-50 per order, no matter if to them or a distributor who sold them these processors). That's why I suggested bad batches that affected their %.
After their tweet, they probably made AMD mad as AMD is really sensitive to anything like that, even though we can't clearly see it. This move can cost them a bit as clueless people will move to Intel because of one tweet which isn't really confirmed on a larger scale.

If it's DOA and the company is at least in some way professional then these CPUs never left their "factory".

I went by my local Micro Center and scored a 5950X this past Friday... I can report that mine is not DOA.

I had been watching inventories of the R9 series (5900X/5950X) at Micro Center since they first released and they have been rather limited and always selling out quickly before going back OOS. Last Friday morning a check on inventory showed them having received a decent shipment of 25(+) units for both the 5900X and the 5950X. I was able to stop by and pick one up before they all sold out again.

On a side note... I noticed today that Micro Center has raised prices on the 5 series CPU? 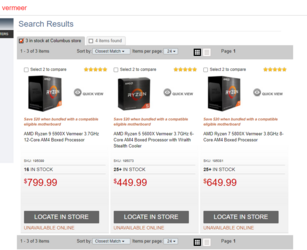 My sample seems to be running okay.

My old 3950X is currently running in a different setup. I'm running with custom water (thick 420 rad) on an open air bench table setup with an ASUS CH8 (wifi) motherboard and 4x8GB sticks of GSkill b-die. 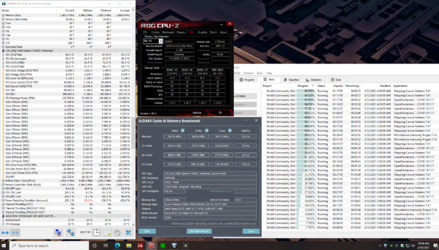 Newegg shuffle has a couple AMD chips on it right now. 30 minutes left to register.

BugFreak said:
Newegg shuffle has a couple AMD chips on it right now. 30 minutes left to register.
Click to expand...

Yeah but I can get both at my local Microcenter for the same price. So no need to "win" the opportunity to buy them. I did go in on the 3070s though.

Woomack said:
If it's DOA and the company is at least in some way professional then these CPUs never left their "factory".
Click to expand...

Do you actually think powergpu is the only customer, or that they are the only one with problems? The article states:
"It looks like these problems could be widespread within the DIY PC building community. Harukaze5719 talked to a Korean DIY PC Builder who reports similar defects and failures when using Ryzen 5000 Desktop CPUs on X570 / B550 motherboards."
Out of 50 builds as many as 8 were borked. That leaves 42 happy customers.
Last edited by a moderator: Feb 16, 2021

It seems that you need to get Zen 3 CPUs dated after week 47. A survey done on Reddit found no Zen 3 CPUs manufactured after week 47 were afflicted with any WHEA soft or hard errors, regardless of AGESA version. All the affected CPUs were the earlier ones. This is similar to the original Zen, where the inherent CPU bugs were fixed in CPUs dated week 25 or later.
R

habbajabba said:
Do you actually think powergpu is the only customer, or that they are the only one with problems? The article states:
"It looks like these problems could be widespread within the DIY PC building community. Harukaze5719 talked to a Korean DIY PC Builder who reports similar defects and failures when using Ryzen 5000 Desktop CPUs on X570 / B550 motherboards."
Out of 50 builds as many as 8 were borked. That leaves 42 happy customers.
Click to expand...

I think these numbers are not really confirmed and there are many variables that people can't see here. They could have one batch that was faulty for some reason, and this can be anything from a manufacturer's failure to bad transport or problems on the PC manufacturer's side. This one batch could affect the total %.
If these numbers would be confirmed by other vendors then we would have a lot of noise a couple of months ago. I work with distribution in Poland and I have some contacts at some larger resellers. I mean stores that sold more than 1k+ 5k Ryzens and no one reported any higher DOA rate since release. Some actually said that their PC manufacture line switched to AMD because of fewer issues. Suddenly one, quite small PC manufacturer makes a tweet, and the whole Internet starts to panic. I find here a problem with our society, not processors.

After reading through here I've seen more than a handful of folks on the AMD subreddit stating that they had to RMA their CPUs for being unable to consistently run at defaults and such, but very very very few [if any] DOA reports.

Right now I'm trying to figure out where an issue may be happening on my machine. If I'm mining with the CPU+GPU [will have to just try the CPU...] it can run for days, but then randomly completely shutdown and not power back on until I flip the PSU switch and flip it back on. Insofar as I can tell the GPUs I've had haven't shown that issue, but maybe it's my 1000w psu starting to bite the dust, the mobo, or the CPU causing some sort of issue. But it hasn't been a BSOD, just a hard power down.
You must log in or register to reply here.