Okay, So it's finally started!

Alright, So I had this build in mind months ago, but due to some surprise issues it had to be put off for a bit.
But I did finally get it going 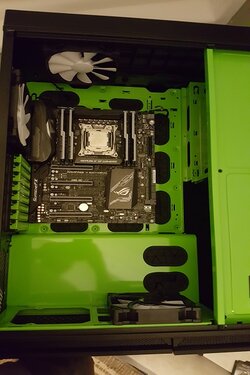 Its the Phanteks enthoo Primo case (which is absolutely amazing by the way)
Right now the mobo is installed (Rampage V Edition 10)
With the CPU (i7 6850k) and Ram (4x8gb Trident.Z 3200 RGB) 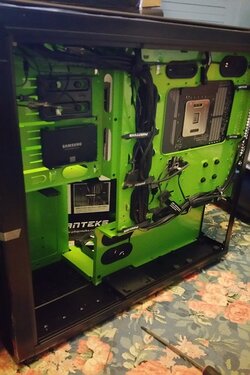 I have on the way most of the water cooling components.
which includes
Pump: XSPC D5-Vario G1/4 Threaded Special Edition 12 VDC D5 Pump With Speed Controller
Rad: Hardware Labs Black Ice® NEMESIS® GTR Black Carbon Radiator - 480mm
Fittings: 12 x Bitspower Premium G1/4" High Flow 1/2" Fitting - Matte Black - $47.88
Tubing: Masterkleer Tubing PVC 19/13mm (1/2"ID) Clear 3,3m (10ft)
Liquid: PrimoChill True Infused – Insanely Concentrated Liquid Pre-Mix – Opaque UV Green
Res: LF Reaction 250mm Reservoir
Block: EK-SUPREMACY-EVO-X99-NP
( I got this one because I had originally intended on getting the EK-FB-KIT-ASUS-R5E10-RGB Monoblock
But they emailed and said they were out of stock and it'd be at least a week, and I liek the way the board
looks already so I decided not to change it too much, just to go with the clear block to see some of the fluid at least.)

I do plan on water cooling the GPUs as well, but that will wait, for now I'm throwing just 1 asus 1080 OC edition in it,
waiting for the release of the 1080Tis, which is when 2 of those will be replacing the one regular 1080.

I do plan on going to hard tubing and compression fittings down the road, once I get a little more practice with the bending of them and such.
But for now I am very very excited to finally finish throwing this guy together!

Any comments or suggestions would be great

I'm also a fan of the black and green theme.
Thats why I got the green fluid and some black and green cables. I do still have to get more of the cables custom,
But on top of everything I did't want to quite spend for the cables yet, they get pretty pricey for some wires
U

Yeah the green color is great. Looks awesome inside the black part of the case and with the white fans
You must log in or register to reply here.