Hello,
I have had AMD Athlon II x2 250 for quite a long time but now I decided to solve an old problem.
My mobo: asus m4n68t-m le v2
The problem is that Core Unlocker shows 6 cores in BIOS, checking them auto or manually ON doesn't really enable them, there's still "2 cores are activated" during POST screen and Windows or Linux see only 2 cores.
And I had them working, I am absolutely sure I saw 6 cores in Windows Device Manager but after BIOS reset (taking battery out because I couldn't get into it and I didn't see any BIOS reset switch on mobo) it stopped working, I've tried many "solutions" I found but nothing turned it back on, I tried possibly every possible combination of settings in the same tab as the Core Unlocker. A strange thing is when I turn off cores 3 and 5 I don't see that "2 cores are activated" on POST screen but Windows and not even Linux can boot (gave them like 20 minutes each, normal boot after full restart takes like 3 mins on Windows). And the opposite combination (3,5 off 4,6 on) makes no change, Windows still sees only 2 cores and the message on POST screen shows up too. I tried to check every core alone, and if I remember correctly cores 3 and 5 won't allow boot (I can check that again) but I can't get more than 2 cores. Turning off the 2nd core works btw and Windows sees only 1 core.
The CPU could handle +5% OC profile with 6 cores enabled at that time.
Rest of specs:
I can't remember exactly the name of the psu but it's 420W
GPU: Radeon HD5670 (oc'd in Afterburner)
RAM: 12GB DDR3 1333MHz, previously 4GB on 600 or 800 something, I don't remember exactly
OS: Win 10 Home
CPU temps never get above 55-60C even after 8hrs straight of gaming with average 90% usage
The only thing that changed between it working and today is a new 8GB stick of RAM but the 4 cores stopped working way before that.

I forgot about BIOS version, it was working on 0702 and stopped working on that version, updating to 0902 didn't change anything

Sorry to burst your bubble but the AII X2 250 are based on regor which is a true dual core die. There aren't any cores to unlock on that CPU
OP
P

I am very sure that this was working with 6 cores, otherwise I wouldn't trade with my older sister for this pc


I truly had saying it but Johan is right.

Is says 6 cores in my bios: 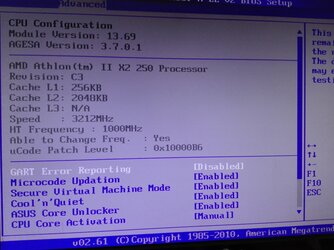 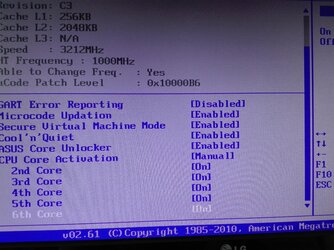 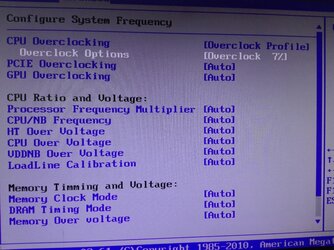 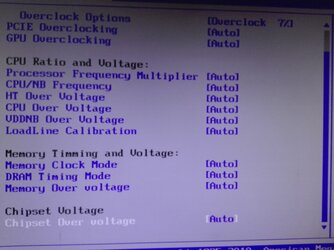 Your BIOS is generic for all CPUs. This one doesn't have 4 let alone six cores. Believe it or not you are stuck with 2 cores. If you want 6 then get a 960T and unlock it.

LOL. Yes it does, and if there was a sixth core it would be active. That BIOS is for all AM2+/AM3 CPU's including a 6 core Thuban.
OP
P

So then why was it working? I am absolutely sure that Windows 7 showed 6 CPU cores in Device Manager on that day. Why was this?

There's no way in hell it was EVER working. It's not physically possible
OP
P

I am fairly certain that at that time I wouldn't agree to a trade i5 2C4T laptop for 2C/2T desktop so it had to be working because I remember that seeing six cores made me agree.
But well, maybe it was a bug. Thanks for the information.

Like I said initially sorry, but I think your sister got the better deal. Just Google AthlonII X2 250 unlock ? You'll get the same answer.
I have one at home although I think it's dead but it wouldn't unlock either.

Since it was with your sister maybe she'll understand and allow you to trade back. That or you could always upgrade to a better processor?

EDIT: I just looked in my pile. I have the Athlon II X2 265 Regor. Same thing with a slightly higher clock speed.
OP
P

I will upgrade to i5-6600k/i7-6700k/i7-7700k soon if this cpu becomes a too big bottleneck for gtx 1060/1070/1080 that I'm getting in like a week in specific games I like the most. (I've heard that nvidia gpus don't push the cpu as hard as amd does so I will need to check this and maybe wait with the upgrade for Threadripper and i9 to make the prices even lower, I doubt that Vega will cause a large price drop).

My guess is it will be a pretty hefty bottleneck. You're looking at what, 4 generations old now. Even your old laptop would be struggling so don't beat yourself up too much. At least now you have an upgrade path and some knowledge to boot. And nobody can take that from you.
You must log in or register to reply here.