Well. To maintain my sanity while being home I ordered up a Primochill PWM D5 pump and a blemished discounted pump housing reservoir from Optimus PC. I wanted to see if D5s have gotten any better with time as the last one I purchased was about 15 years ago. I was impressed by the performance, but I absolutely HATED the noise. It had a motor whine which propagated outside of the case, and did not quiet down until I set the vario to 3. Setting 1 was obviously the most tolerable in my quest for a near silent system. I eventually sold it and got my first 10 watt DDC and have been obsessed with them since for their quietness and relative performance.

Modern D5's need no introduction. You have the vario units, and the PWM units. There are so many pump and reservoir combinations out there now I can't even keep track, especially since there are so few people in the review arena with the equipment to properly compare them. In any case, mine is a PWM unit, with the RPM/PWM pigtail on one wire loom, and the power supplied by a 4-pin Molex on the other. Would be nice if it was the more robust and modern SATA connector, but oh well. I intend to hack it off and install a Deans style T-connector instead, mating to a modular PSU peripheral cable removed of all its other power cables for a more secure connection.

The Optimus reservoir is built out of a CNC'ed Aluminum heatsink housing, and an acrylic reservoir. I chose a cap with a single G1/4" fill port. The whole device is stout, heavy, and thick. The blemishes on this one are obvious in the photos, but I'm in it for the performance. It's still a handsome unit, and when showing a system off with online pictures another observer would be hard pressed to see the defects. The volute on the pump top has an appropriate shape, expanding outward for most of the circumference. Eyeballing the outlet, it is a free flowing design. I'm not going to measure all of the dimensions and compare against my textbooks on centrifugal turbine design, though.

So, for the test loop fun.


Pump starts around 7.5V where it is specified for 8V. Takes a few seconds to spin up to full speed at that voltage. Even here, it is likely enough flow to maintain most loops with this level of restriction. Mild flowrates but still decent. Essentially silent on a countertop.
Pump at 10V is pulling about 11W. Strong enough flow to flush out pretty much all the bubbles in the system. Still quiet in operation. In a modern sound engineered case likely to be inaudible. Watching bubbles flow through indicates strong flow for any reasonable system.
Pump at 12V is pulling about 18W. Faint but noticeable pump noise. This thing is working almost to full potential here. Even in a case, it would be barely or unnoticeable in operation. Flog it!
Pump reaches maximum current draw at 13.5V and 1.5A. 20 watts. This is the maximum power for my loop. Noise characteristics indifferent to 12V. At full power the flow is NUTS compared to a 10W or 18W DDC. I will have to set up a milk jug and do my time test again, but it is beastly flow.
Increasing voltage from 13.5 to 24V simply reduces current draw. It maintains a 20W power draw at all voltages in this range, presumably to maintain a constant RPM. There must be some sort of power regulation circuitry inside allowing this to be possible. No speed change across the range, either.

The heat from the pump, since the rotor does sit in a metal housing, does move to the water loop over time. My radiator and the metal reservoir housing would slowly heat up over time to a barely lukewarm status. Once I rotated the radiator to allow airflow and kicked in those old Gentle Typhoons at 5V, everything returned to cool to the touch.

The flow in my test loop at full speed is strong enough to pull a cyclone in the reservoir. You can see this in the below pictures. Thankfully, once all of the bubbles are flushed out after several hours, no air is being sucked down into the intake. Until I let it sit, I was wondering if I would need to pick up an aquarium foam prefilter to break up the vortex.

Keep in mind that the Optimus V1 is a relatively high pressure drop block. If this equipment combination is any indication, this pump classifies as overkill for a simple CPU only setup. My next move after another counter top project is to pull put my main rig and see if I can integrate this into that system. It currently has an Optimus V2, Heatkiller IV 2080Ti block, 280GTX radiator, Corsair 280mmx25mm radiator, and dual 10 Watt DDCs. I want to shove this 360GTS in there to give me some more frontal surface area. For normal gaming and even benchmarking this seems to be folly. Even with my fans at 2000rpm I'm not sure adding another 360 will do a bit of good, especially when I play almost exclusively on headphones. If I get a few more percent clocks out of this 2080Ti, would I even notice in my gaming? Probably not. It's more a benchmarker's realm. These modern cards seem to have very little performance to be gained by overvolting and raising current limits. And if I was in that game, I'd just run an open loop into an ice chest full of water instead for suicide runs.

In any case, I see why people like D5s again now. The old ones had the performance, but failed miserably on noise. Maybe it was the stock hard plastic housings and metal mounts. But these days, if you have the space, just go for it. I can't wait to pick up another one, simply because I'm a hydraulic horsepower madman. And still, two pumps helping each other at a lower speed is less SPL than a single pump working harder. But then again, in the real world, will you even notice outside of a test bench?

Test loop flow results
13.2+ V : .81 GPM
12V : .71 GPM
10V : .53 GPM
8V : .29 GPM
Note: block upon disassembly was already showing signs of gumming up, even though the cyclone effect remained about the same in the reservoir. Not going to re-do the test for a bit. I have too many projects on the kitchen counter and the wife wants some of the surface back!

My old D5 setup, with a Thermochill PA160 and Swiftech block I can't remember the name of.

All the new fun stuff! 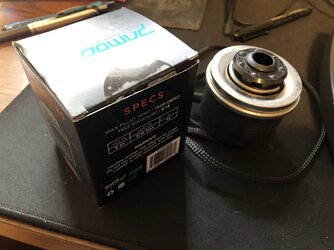 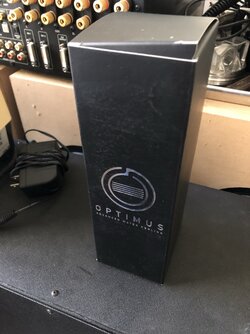 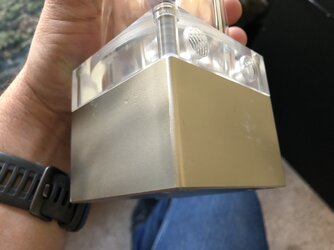 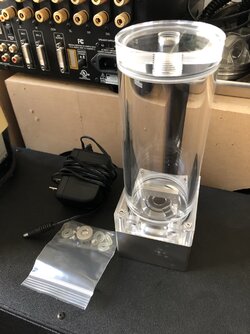 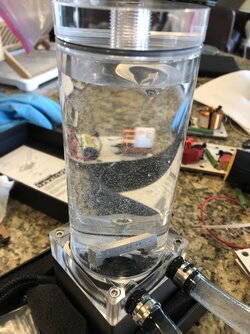 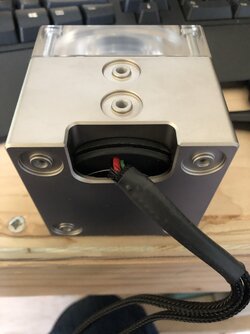 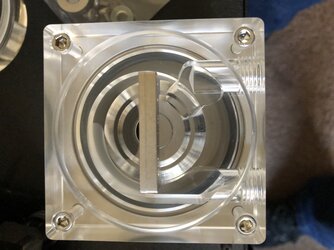 Footprint still turns me off, but I guess that's just personal preference.
Had 3 Alphacool D5's. All failed within 1 year. Bad impeller design. 1 was an Alphacool RMA from the first dead one. After that, they would not RMA any more from me. Left a bad taste in my mouth.

Mr.Scott said:
Footprint still turns me off, but I guess that's just personal preference.
Had 3 Alphacool D5's. All failed within 1 year. Bad impeller design. 1 was an Alphacool RMA from the first dead one. After that, they would not RMA any more from me. Left a bad taste in my mouth.
Click to expand...

Which Alphacool pump were you using, the 655 or 755? The 755 is a knockoff design, trying to harness the three holy grails of more power, quieter and cheaper. I've read so many questionable things about them to not try one.

I'm tempted to dig out my pair of Storm G5s and run a triple block test loop to see what the flow rate is. Make this pump work for it's keep.

Voodoo Rufus said:
Which Alphacool pump were you using, the 655 or 755? The 755 is a knockoff design, trying to harness the three holy grails of more power, quieter and cheaper. I've read so many questionable things about them to not try one.
Click to expand...

They were 655's. Shortly after my experience they redesigned the impeller. Different material or something. Don't know any more than that because I was back to DDC's at that point.
OP

Interesting. Didn't know the impellers were changed. I really like the metal heatsink housings that come with Alphacool's DDC310s though.

I think I want to build an HTPC using one of my DDCs in a Iceman reservoir built for the NCase M1 sometime, or a Sliger case.

I had three D5's go bust on me. They were Corsair branded. FrozenCPU had a sale on them and I purchased 3 of them as spares. 1 was DOA and the 2nd one started squealing like a stuck pig. The third one worked fine for about a year.

I tried to start an RMA claim with Corsair only to find out the pumps did not have a warranty because they were part of a kit, and to get the pumps replaced I needed to ship the entire kits. I had no knowledge the pumps were from kits and FCPU did not disclose that information.

Even with sales receipts, Corsair refused to help me, and FCPU would not replace the pumps nor refund me. As they state; "All discounted sales are final. No refunds or exchange" So since that time I've never owned, nor care to own any Corsair product.

I purchased a Lowara branded D5 from Hardass more than 5+ years ago which is still going strong. This thing is bulletproof.


Yo Voodoo, that setup looks awesome! Congrats and good luck on the new build!

FCPU f***ed you.
Ever since the Mark ordeal, I've never been back there.
OP

Updated first post with flow test results. I'm actually quite surprised I didn't break 1gpm. Could be because the fresh water was already starting to grow stuff and plug up the block, but I don't think I would have gained that much back.

That's the only bad part about the Optimus V1. It's very prone to plugging off if you don't have enough organic inhibitor in your system.
You must log in or register to reply here.

B
AIO Eisbear gunked up?