I've done a couple of these mini-reviews on the Dell XPS 9570 and Lenovo X1 Extreme so I figured I would do one on the OP15. This is by no means a complete review, just something I wanted to put up for those people considering the laptop and if undervolting/repasting/adding memory is worth it. These are all synthetic benchmarks which is never a real substitute for real world apps/games.

I've organized this post a little differently than the past, I'm going to stick to excel charts to show performance and temps. If you want a link or screenshot of a particular benchmark, I can post it here. 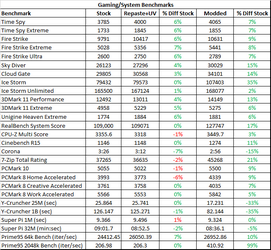 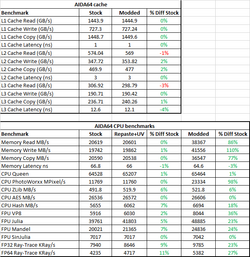 Thermals
Testing for the thermal section is done with a variety of tools. I am using Prime95 29.4B7 to test the CPU, RTHDRIBL as a light GPU load, and RealBench 2.56 as a heavy workload on both the CPU and GPU.

Undervolting
The CPU in my OP15 is mediocre bin wise. I was able to undervolt it by 135mv and it is 4 hour RealBench, 10 hour Prime95 Small FFT, and 8 hour AIDA64 system stress test stable. I am not concentrating on a how to for this but can add more detail if anyone requests it.

I also undervolted the GPU by increasing the core speed by 150MHz with MSI Afterburner. This not only provides more performance but causes the GPU to run at a lower VID. It's also much easier than messing with the voltage table.

Repasting
Some how OP managed to apply more paste to the OP15 than Lenovo on the X1 Extreme, no small feat mind you. Removing the stock paste and applying some Kryonaut yielded the results above. Not a huge decrease, but worth it in my opinion. I may take the heatsink off and check to see if it is straight as I have 3 cores that are 4C higher than the others.

Here is a fun quick and dirty against my Dell XPS 9570 benchmarks and temps both stock and modified: 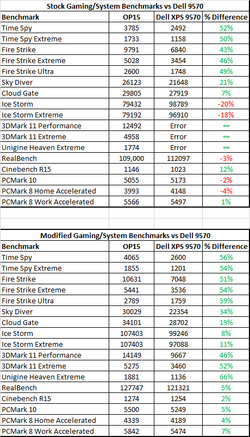 Obviously this is far from an apples to apples comparison but I thought it was fairly interesting. The OP15 with the fans in gaming mode is LOUD compared to the XPS. I am bummed that I didn't notice that HWinfo64 doesn't show CPU/GPU fan speeds or I would have included them in the comparison. I am thinking about ordering the bigger battery for the OP15 to see what kind of battery life I can get out of it. With the stock install I was getting around 100 minutes in PCMark 8 Home Battery Conventional, after a fresh install I was able to get that up to 130 minutes. For comparison my X1 Extreme gets 280 minutes.
You must log in or register to reply here.