Hi everybody! Before i begin i would like to say that this forum helped me a lot with overclocking and guide me throw the process.
After i bit of searching for overclocking guides i came across with this (miahallen's) guide, so i followed this for the overclocking process.
The important thing to say here is that i am using the stock cooler and i a bit of afraid if something goes wrong in the future.


I do not really know what imc, pll and pch is, so i left it auto(p7h55m bios is a bit different than miahallen's post).
I ran intelBurnTest at high stress level(3 times to run) and it is stable.
But i am worried about the cpu temp. I am using RealTemp and idle is 70-80. Some times it goes 90.
While in a game with low graphics settings and hd res it goes 95(while playing for 5 minutes, i dont really know for 2 or 3 hours what it will be ).

Now i wanna ask> Is it safe? I think 80 is to much... Is it safe for ram to be at 1600mhz?Should i downclock the ram?Are voltages ok?
miahallen says that 180 bclk and cpu ratio 22 should be ok for stock coolers. But i am afraid about cpu temp(80 degrees)...
So what do you think? I would be ok or should i downclock?
Thanks a lottt

I am using RealTemp and idle is 70-80. Some times it goes 90.
While in a game with low graphics settings and hd res it goes 95(while playing for 5 minutes, i dont really know for 2 or 3 hours what it will be ).
Click to expand...

I would try to remount the stock heatsink (make sure you clean off and apply new paste). Or get a cheap cooler that is better

Because i am a bit cautious i loaded default settings, ill remount heatsink tommorow(i've just ordered paste) and i will overclock again tommorow posting the screenshots too.
Thanks for answering!!!
OP
T

I remounted the heatsink and im 47-55 idle now(thanks a lot for that). Can i reach 180bclk? Whats your opinion? 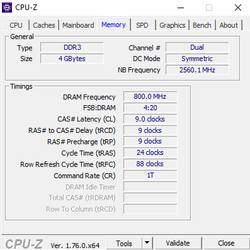 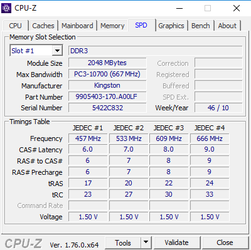 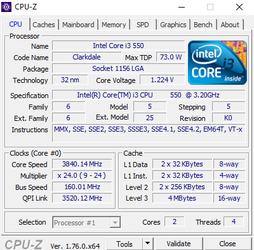 Maybe...likely? That idle still seems warm for stock settings though...

But that said, I cannot see the images... please host it here using the 'attachments' button (in advanced).
OP
T

I edited the screenshots in the previous post(i think its ok now). Btw idle now is 47(RealTemp says 47 50) with the settings in the screenshots(1.2v and 3.840mhz)... Is it still warm for stock cooler?What do you think?

Not sure honestly... load temps are what matters.

Anyway, after looking at the screenshots, your memory is overclocked pretty heavily. Can you lower the memory speed/multiplier? I believe that will be your limiting factor to reach 180 BCLK.
OP
T

I changed ram frequency from 1600mhz to 1280mhz and ram voltage from 1.605 to auto..
Shall i raise bclk now?
Btw do you know what is imc voltage, cpu pll and pch voltage? Should i change those?

Have you read MIA's guide by chance? http://www.overclockers.com/3-step-guide-overclock-core-i3-i5-i7/

Where you are overclocking, you really do not need to touch those voltages.

I read mia's guide before oc but i was a bit confuse because my mobo is a bit different ^^
Yes my ram speed is 1280mhz(cpuz says 640mhz).

Try to push on up! The guide explains how to isolate each thing to see where your limits are. If you want to see if you can reach 180 BCLK, lower the memory multiplier (you did), lower the core multiplier (so the CPU isn't overclocked) and raise the BCLK. What this does, again, is to isolate each item. If you can reach 180 bclk with everything else low, then raise up the CPU multiplier and test... if that works, raise the memory back up and test...

Its all in the guide.

Step 1) Maximize Bclock Frequency
Isolate the bclock from the CPU

First you need to isolate the bclock and find its stable limit with your chosen cooling. In order to isolate the bclock from the other components, the first thing you need to do is manually force a low multiplier for the CPU. For example; at stock speed, an i5 750 runs on a 133MHz bclock and a x20 multiplier which results in its stock speed of 2660MHz (133×20). Raising the bclock to 200 with the stock x20 multi would result in 4000MHz for the CPU, which you’re not quite ready for yet. If you are shooting for a 200MHz bclock, then a safe choice for now might be a x12 multi, which would result in a CPU speed of 2400MHz if you were successful in reaching your 200MHz target bclock. Doing this isolates the CPU from the bclock so you can focus on only bclock overclocking in this step. In some situations, x12 may not work, this is just an example though, so don’t be afraid to try other low multipliers if x12 doesn’t work.

Isolate the bclock from the memory

The fastest rated speed for memory on P55 with an i5 750 (for example) is DDR3-1333, which is a clock speed of 667MHz (dual data rate “DDR” doubles the bandwidth to 1333-like speed). Just like the CPU, the memory receives its clock from the bclock via a multiplier, in this case x5 (133×5=667). This is most often expressed in the BIOS as “2:10”. If you were to overclock the bclock to 200MHz as described before, your memory would be running at 1000MHz (DDR3-2000), and beyond the specs of all but the most extreme memory. To isolate the memory from the bclock, lower the memory multiplier to the lowest setting available, most likely 2:6. If you were to reach your goal of 200MHz bclcok frequency, your memory would only be at 600MHz (DDR3-1200) and well within the capability of all but the worst DDR3 on the market.

Isolate the bclock from the iGPU (Clarkdale only)

Clarkdale CPUs include an iGPU (integrated Graphics Processing Unit). If you are using an H55 or H57 based motherboard and the iGPU is enabled, please pay close attention to this section. Some early BIOS versions did not allow for iGPU clock speed adjustment, if you do not have this option in your BIOS, please update your BIOS to the most recent version. This platform is still very new and immature, so this information may only be relevant for a short time. However, at this current time, it appears as though the iGPU frequency setting in the BIOS is based on the default bclock frequency. This means that an iGPU frequency that is set at 900MHz in the BIOS, will only actually be 900MHz if the bclock frequency is set to 133MHz, if the bclock frequency was raised by 25% to 166MHz, the actual iGPU frequency would also go up by 25% or 1125MHz. This is a relatively simple concept to understand, except that YOU have to do the calculation, because the BIOS only reports the set frequency, not the actual frequency. What makes things worse at this time is that there is no software monitoring utility that is capable of reading the actual iGPU frequency.
Click to expand...