Overclocking an i7-6700k, beyond the basics

i want to say first that i am grateful to the team members here. i knew next to nothing when i first became a member and with some assistance i was able to build and overclock my very first rig.

now, i have been trying to educate myself and it appears that most "serious" overclockers want to adjust things like c-states and eist (speedstep). i do not know much about either of these settings, but i hope someone here can shed some light in laymans terms. that way when i read more about the subject later, again, i will have some context about what im reading.

if i want to get up to 4.7 or beyond, is it absolutely necessary to disable/change c-states and eist? additionally, should i consider disabling turbo boost? on my own rig i have turbo boost, c-states, and eist on auto.

speedstep = cpu will lower clocks to save power when not under load.
my 2500k downclocks to 1.6ghz and .9v when it's at idle

What are your temps when stress testing?
You're most likely reaching the limits of the H55 already.
W 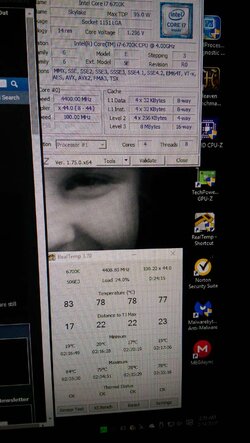 sorry guys, been away from home for a bit. so i decided to start fresh, cleared out all my OC profiles from Bios. this is 4.4oc, with turbo boost still on auto and voltage on auto. admittedly, the temps are about as high as id like to see them with my H55 (even with performance fans), but we know that skylake cpus can take a punch with respect to voltage and heat. some getting as high as 1.5v and 90C. would it be safe for me to stop here and call it a day at least until such time as i can upgrade my cooling? i ran this profile with Prime for about 2 hours and never errored or failed.

Yep, looks safe to me
OP

man, i am a bit sore with you kids. so wingman99 got me to thinking. i know i know, DANGER WILL ROBINSON!!!
he said that he thought my voltage was a bit high for such a mild oc. at the same time, i was getting temps that were testing the limits of my poor H55 (mind you, with fractal high performance fans (can you see i am proud of those fans?)) AND my case fans were running wide open. so i was thinking, why in the world is my cooler struggling at only 4.5ghz and 1.29v? thats when it hit me, maybe with my cpu voltage being left on AUTO it was spiking unnecessarily. so ran the intel diagnostic alongside cpu voltage monitor and sure enough, my voltage would spike to as high 1.41 and even 1.44 during high loads. it was difficult to determine what my avg voltage really was while this was going on, but i can say with some confidence that it was entirely too high. that would explain why my poor H55 was working so hard. fast forward. i have since gone up to 4.6ghz and with the voltage manually set at 1.305, i have run Prime95 v26.6, for over an hour and my highest temperatures were 64, 62, 61, 63. since i am not getting the crazy voltage spikes, the old girl is keeping up very well indeed. i even have my case fans running on low.

i honestly figured that you guys would warn me of voltage spikes if i left it on auto. maybe you didnt know? after some reading, i learned that it is a common occurrence when overclocking. thats why most overclockers set it manually. i do want to say thank you to neoncancercandy for advising me of what speedstep is. leaving it on (i never turned it off), my clocks idle down to 800mhz just like they are supposed to when not under load.

Wasn't aware you were running on Auto... Always set your voltage in the BIOS, now you understand why.

dopemoney said:
man, i am a bit sore with you kids.

i honestly figured that you guys would warn me of voltage spikes if i left it on auto. maybe you didnt know?
Click to expand...

Everybody here knows that, that's why the call it "Auto". Read the 1st quote, where you said that you had set the CPU voltage to 1.29V - so why would think that you actually had it set to "Auto". You need to be clear when you post about BIOS settings and in the future capture a screen shot rather than taking a photo of the monitor screen.
OP

! I totally thought I set the voltage, but clearly I didn't. Yup, that might be my bad, I accused in ignorance. I thought at the bottom of the op I said I was running auto, but I didn't. It does indicate that I "set" it. I didn't. But I have now. Still, thanks for helping and educating. My apologies. Thanks for the screenshot tip.

No problem, live and learn. Nobody here was born with the "knowledge", everybody learns from other's experiences and then adds to the knowledge base from their own overclocking exploits. With my Gigabyte X99 board there are "CPU Upgrade" settings in the BIOS. What's nice about them is, unlike most other "Auto" settings, the "CPU Upgrade" establishes a fixed VCore for each specific setting, not an "Auto" one that keeps increasing. The "CPU Upgrade" 4.3 GHz setting I'm using sets the VCore to a fixed 1.25V so I don't have to worry about VCore spikes with resulting Temperature spikes. With my Hex core CPU I would need to upgrade my cooling to go significantly higher, but since I don't have any performance issues at 4.3 GHz, I'm just leaving it as is for now.
OP

Dude! I am using Gigabyte Z170XP-SLI and it also has those same type of auto overclock settings available for both the clock and the voltage. The difference being when my voltage is on auto it doesn't "fix" the numbers, it lets them float. Why do you suppose manufacturers would allow that to happen? Do they presume overvolt is better than undervolt because of temperature protections in place?
Thank you for sharing your personal settings/experiences. Very helpful.
I am running at 4.6, at 1.305v. Default is 4.0 at 1.260. I ran my overclock all night with Prime and stayed under 70C. Question: Since I now idle at around 31-34C, instead of 18-26C which is where I was before overclocking, can I still reasonably expect a few years of life running this 24/7? Obviously you can't know the answer to that for certain, but is it a reasonable assumption given the voltage and temps I have? Regardless, I sort of plan on running at default settings anyway, this processor is amazing. I was flying around even before oc'ing.

It goes high rather than low because going low on a "meh" overclocking chip will cause instability. Going high just adds heat.

Idle isn't what you need to worry about, it's load that can give potential issues from high heat and high voltage.
That said, you're well within the safe range at 1.3V and 70°C.
OP

Thanks ATM, you guys are awesome. I am going to continue to learn and read and ask questions. I think I might just go ahead and run this oc for a while. I don't fold or render, I game pretty hard, but nothing that will ever tax my CPU like Prime.
If I decide to go up to 4.7, should my next voltage increase be .05 (1.31) or should I maybe go up to 1.32? I'm still not sure of the increment relationships yet. Is this where the "silicon lottery" starting coming into play?

Your next voltage increase should be "as needed". Try it at your current voltage and see if it's stable. If it isn't, then bump up one notch until it is stable.
Yes, you're getting into the range of "silicon lottery" now. Almost all can run 4.5GHz, most can run 4.6GHz, but getting 4.7 and up stable for daily usage takes some luck and tweaking.

so, i have been working on this. i am at 4.7ghz with 1.325v. i have been watching CPU-Z like a hawk, it stays pegged at 1.320 and only comes down to 3.08 every now and then. Prime running for 30min so far. when i was at 4.6 and 1.305, my voltage would fluctuate a little, but never more than what i specified. not sure what this indicates, if anything? temperature wise, doesnt look like i will get over 84C. with my cooler, i think that's acceptable. room temperature is 69F. thats 37C ambient, right? 0 Celsius=32 Fahrenheit? what are your temps on 6700k at [email protected]? i wouldnt think your cooler is better than mine. are you at or near the 80s?
OP 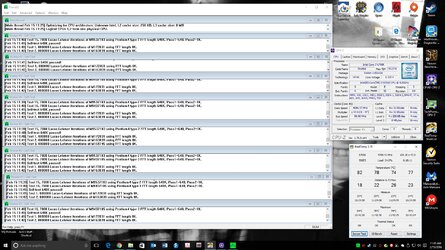 Looks solid to me!
M

maybe something to think about?