Overclocking for the first time, running into problems :(

I just finished building the following box the other day:

I ran the system at it's default settings and everything seemed fine, I decided to do some research on overclocking using recent videos on youtube to tweak my system. Now what's odd is when I changed the CPU core speed to 4GHz and saved my settings in the BIOS is still showed as 3.2GHz (right hand side of the attached BIOS image) and using CPU-Z (in attached image in the BLUE box) it shows little under 3.2GHz.

What am I doing wrong?

Thank you for any help/ guidance to this overclock noob.

What did you raise your core voltage to so that the higher speed setting is supported by enough juice?
Last edited: Aug 22, 2016
OP
G

I figured this system can take a beating so I looked all over youtube for a system close to this for overclocking. I found two main ones:

I haven't personally had any overclocking experience with the Skylake or he Broadwell and I'm trying to remember how I overclocked my Haswell refresh. But if I remember correctly, on the Haswell, once your base overclock exceeds the Turbo speed either the Turbo automatically disengages or you have to disable it.

What about your AVX offset? The first video tutorial says if you are running software with the AVX instruction set (like Prime95) the CPU will automatically downclock to the AVX offset limit.

Also, did you disable the power limit setting as the first video talks about?

Finally, have you checked for package/core temps during your stress testing? If the CPU is getting too hot it will downclock. Don't take it for granted that just because you have a nice water cooler this won't happen. If the cooler is not functioning properly for some reason the temps may be getting too high. A common cause of this is not having good contact between the water block and the CPU face. As in TIM not spread correctly or mounting screws not tightened evenly. Make sure you check the temps with something like HWMonitor (non pro version).

The other thing you need tor reckon with is that it usually doesn't work well to plug in someone else's overclocking values as apparently you have done. Every CPU is different, even within the same model line. The quality of the silicon used in every batch run will be different and there are subtle variations in manufacturing processes as well. What you need to do is overclock in small increments instead of jumping from 3.2 ghz to 4.2 ghz or whatever. Start with 3.3 ghz, stress test, monitor temps and if you pass the stress testing raise the clock to 3.4 and repeat the process. You need to see what the limits of your individual CPU is rather than taking it for granted that yours will do what someone else's will do.
Last edited: Aug 22, 2016

Yes, correct, you need to leave turbo on.
OP
G

Thank you trents and Tír na nÓg for your replies and sorry for the delay (family and work) in my findings. So before I reseted everything in the BIOS back to it’s default settings I wanted to run MemTest86. So before running the test I checked the info on my memory and it seemed odd that #2 wasn’t matching (http://grab.by/SnWi) with the rest of the memory. I then ran the test and on TEST 02 it froze my PC at 16% (http://grab.by/SnWG) .

So after a CMOS reset I ran MemTest86 and checked my memory info again (http://grab.by/SnWI) as you can see it has odd symbols in #4 (what in the world could that be?) ran the test, same results froze at 16%.

Rebooted and wanted to check one last time on the memory info (http://grab.by/SnWK) before running this last test, same 16% froze.

When I googled the “16% freezing error with memetest86” others have come across this but never on test 2. So I have to assume if I remove all the memory but one and test each one and they do pass it will have to be the Mobo or CPU?

Thank you all for your help!
OP
G

Well I've tried all four memory sticks in DIMM slot A1 and they all lock the system at 16%. I thought maybe DIMM slot A1 might be bad so I tried DIMM slot B1 and still the same issue, locks at 16%. What does this mean? Are all four of the memory sticks bad, is my Mobo bad (if so what other tests can I do to see if it's the mobo) or could it be a CPU thing? I'm lost

All you should need to do is raise vcore and up the multiplier. Do NOT disable turbo.

Your cpuz screenshot is at ie.. when you put a load in the cpu, what speed does it show?

64gb of ram??!!!!! Wow. Hope you use close to 32gb ready to warrant that purchase! We'LL work on getting your memory up to speed after the cpu. For the time being I would raise System Agent voltage and IO voltage up .1V and see if that helps. 64gb is a ton and likely needs more SA and IO voltage to stabilize.
OP
G

Ok I'll try that and also buy another DIMM to test if it's my current DIMM. Any recommendations that Frys might have? Thank you for your insight EarthDog

Buy another stick? No. You don't have four bad sticks I wouldn't imagine.
OP
G

@EarthDog - Yea I figured the same but having to swap out Mobos is such a pain, I have a new mobo ready to be picked up today I just wanted to triple check with another brand of memory (since memory is cheaper to test) before having to drop another $600+ to see if it's the mobo. Should I not waste my time opening the DIMM package and go get the new Mobo?
OP
G 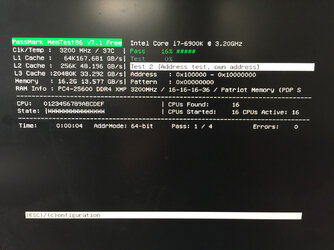 Best of the best when it comes to X99 boards, am I wrong? I'm doing more then just gaming, I'll be using 3D apps for heavy rendering / modeling.
W

Ok so, It's not my memory (tried two different brands), it's not my Mobo (bought a second one to trouble shoot), I unhooked all SSDs from the mobo and I even swapped out GPUs to see if maybe that was the issue. Is it safe to say its the CPU?
W

Have you tried The Intel Processor Diagnostic Tool? http://www.intel.com/content/www/us/en/support/processors/000005567.html

I would RMA The CPU Intel will do a cross shipment, I just did a skylake CPU RMA and the new CPU is working great.
OP
G

Downloading it now, I'll go run the test and report my findings. Hang tight
You must log in or register to reply here.