I seem to have, once again, proven that I know nothing, this time about pcie stuff.
looking at the intel site it would appear that my z97/4790K rigs have 16 pcie "lanes" in the cpu and 8 more "lanes" someplace in the chipset.
I would have thought that they would be someplace buried in the motherboard, like memory traces, what and where are these pcie lanes?
this stems from my failing to figure out that on my asrock Z97extreme9/4790K rigs that I don't have enough of these things to run sli and an NVMe drive.......... sad......... 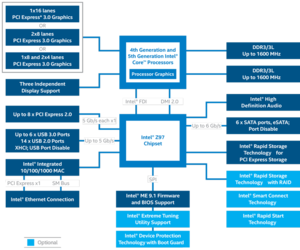 where are the "lanes"?
are they just the "pipes that connect the gpu to the cpu?

Simply.... yes. There are traces that go from the pcie slots to the cpu via traces on the pcb.

Not as simple: http://www.hardwaresecrets.com/everything-you-need-to-know-about-the-pci-express/
OP

I think I saw in the pictures from ces, an am4 board with 3 m.2 pcie connectors and sli/xfire capable.
what would the lane configuration be for that? 32 lanes to the cpu and 12 to the chipset?

I was under the impression that the new AMD CPUs only have 20 PCIe lanes to share with the PCIe slots, similar to the 6700K iirc. But the board you saw might actually share bandwidth on all 3 of those lanes, I'm guessing there. I woudl think it's a safe bet though, as I don't know of many programs (for the retail market) that could utilize the full bandwidth of PCIe x4.

Which probably means for them to say it's SLI/Xfire capable, GPU run at x8 each and the NVMe would share bandwidth, as they aren't out and I haven't read any manuals on those board's this is just speculation. Again there might be a dedicated lane on the MB that would transfer data from the NVMe slots to the CPU in another fashion, but no clue how that works, that's just way above my understanding.
OP

doing some searching, the ryzen platform will have a total of 24 pcie lanes so we would be able to go sli at x16/x8 or 1 NVMe and single card.
what I thought I saw must have been 1 pcie and the others sata.

The confuguration will vary by board as it does with Intel.
OP

then is pcie a hardware thingy or software thingy?
can I think of the chipset as a sort of cpu, that I can't do anything with? if it can change the function of the dmi 3.0 connection it must have coding in it.
W

PCI-E is hardware. The chipset is collection of integrated circuits that control digital traffic on the motherboard, then send the digital data traffic to the DMI 3.0 bus that travels to the CPU. The DMI 3.0 (Direct Media Interface) is a digital signal with multiple lanes.

Putting together a new system.