I got the CPU on Wednesday and by Friday evening it was undergoing delid surgery. It wasn't bad, but with 12 cores, I needed some help with temps.

The socket 2066 X-series Intel processors are larger than the rest, so you need a delid tool specifically for these X299 platform CPUs. I decided to try out the Rockit 99 from Rockit Cooling. I never heard of them before, so I took a chance. Here's the i9 7920X placed into the tool. It's a perfect fit. There is a triangle on the tool, match up the triangle on the corner of the CPU for the proper position. 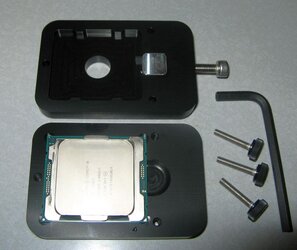 You put the two halves together and screw them together with the provided thumbscrews. See the little slot on the case, that limits the amount of movement allowed, because the Skylake-X has circuitry close to one side of the IHS. It's a no brainer method of making sure the user doesn't screw up. Peace of mind. 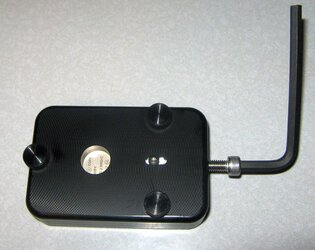 You tighten the provided allen wrench until you hear a "click." Open it up and find it delidded. Actually, the Intel TIM looked well spread out and evenly applied. This was way better than my 7740X. So, any drop in temp will be the main result of liquid metal being a better heat conductor. 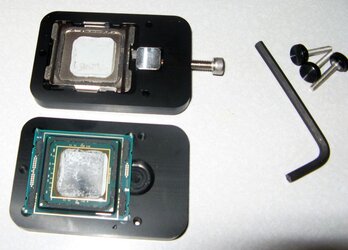 I posed this shot after I got the PCB and IHS cleaned up. I used a little plastic scraper (left side) and I heard a credit card will work in a pinch. Honestly, I ended up using my fingernail/thumbnail more than anything. Seemed to work best. The bottle is clear fingernail polish. I put three coats of this down on the PCB in case any liquid metal runs down off the die. The electrical tape is used to mask off the area before applying the LM to make cleanup easier. Just peel the tape off. I like Super 33+, it's high quality stuff. I saw a couple youtube videos where they just use office type Scotch tape and it worked. You decide what you want to do. 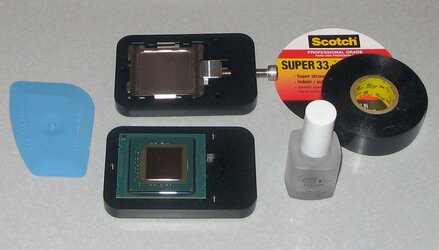 I used alcohol wipes that come in individual packets to clean the CPU. If you have a bottle of rubbing alcohol, put a little on a microfiber cloth and clean the surfaces real good. I taped the areas off around the CPU die and the area on the IHS that I will coat. I know it's hard to see in the photo due to the black tape on black tool. But, I'm ready to apply the liquid metal. I'm using Thermal Grizzly Conductonaut. 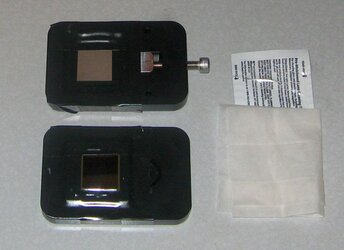 I forgot that I took two photos of it with liquid metal on it. One got the flash reflected back, but this shot is not too bad. It was still in the camera. When I applied the LM, I got it all over the electrical tape (good thing I used it). I peeled the tape off and it was all clean underneath (remember, I have clear fingernail polish on the PCB in case any excess squeezes out, the LM is a tad thick as you can see). 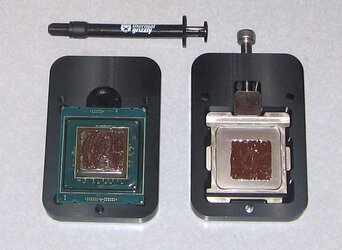 I relidded using a high temperature silicon-based adhesive. I used this same stuff on the 7740X, it does a good job. The Rockit 99 has a relid tool that snaps into place. The rocket holder bolts on and you tighten a thumbscrew to hold the IHS firmly into place until the adhesive cures. 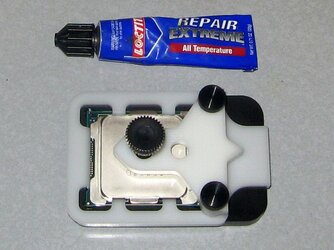 The delidded/relidded 7920X was put back into my system and latched into the socket. I reapplied the waterblock using MX-4 thermal paste, same as what it was first installed with, so all variables are the same except for the liquid metal under the IHS. I reran my stress tests using a 4.6 overclock and vcore of 1.25v (moderate OC on H2O). Ambient temp was 23 degrees C and idle temp was 29. The max load temp for IntelBurnTest (stress) was 8 degrees lower, Geekbench 3 was 8 less, and XTU (benchmark) was 9 degrees C. cooler than before delidding.

So, I call it delta of 8 degrees. I was hoping for at least 10, but I'm still pleased. Remember, when you see people with 15 or 20 degree improvements, that's probably with CPUs that had poorly applied TIM. This one looked good. That 8 degrees will mean I can OC another notch higher and get away with using a bit more vcore.

EDIT: I was previously unable to get a 5.0 GHz CPU-Z verified. Now I can. 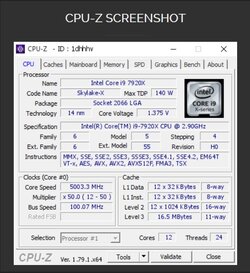 Nicely done batz! 8c reduction in temps is nothing to sneeze at. Again gratz on the 5.0Ghz with a 12 core!

Time for a sub in the October MArathon, isn't it? You wil certainly be able to run it on 2 or 4 cores without [email protected]...

Very nice tool. The relidding piece is a nice extra. Thanks for the write-up and pics.

... but I won't hide I was expecting bigger difference in temps.

After I saw how the i9 IHS is stepped and the CPU die is so big and also it has a tiny IC chip on the PCB, I'm so glad I used the tool. Like I said in another post, I consider it good insurance, these X-series CPUs are not cheap.

I drew a red circle around the component, see how Intel cut the corner off the IHS so it would clear the baby IC chip? Make sure the lid goes back on the right way or you'll end up damaging that circuitry. 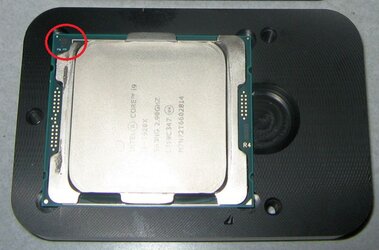 If I order from any US store then it will cost me +23%tax+3% duty+shipping so pretty much 2x more than the item is worth. Newegg is shipping to Poland but their shipping costs are ridiculous. I wasn't checking delidding tools but they want ~$100 for motherboards. I can live with my CPU as it is now. It's fully stable at 4.5GHz and for benchmarks can set 4.8-4.9GHz. Maybe I will delid it but I'm not in a hurry.
Still I think you should have bigger temp difference after delidding on your chip. There were people who had ~20°C difference on 7900X. There is also a chance that Intel improved TIM in 7920X as it was released much later than the 7900X.

Der8auer's tool is over-designed with metal and levers and things. Rockit 99 is much more simple, not sure if the difference in size is roughly proportional to the cost difference over the 88, allowing for fixed costs also. The import costs as mentioned separately are also a factor because of their location. I think there was another EU source of a similar product to the '88, but I can't remember who that was, or if they will also do a similar one for X299.
OP

I wish they could make it all in one, where it'll fit a range of different processors. I do like the relidding kit on the Rockit 99. But, to be fair, the regular Der8auer tool I have, also has relidding parts.

Manufacturing and shipping cost are peanuts... Price are that high because of high demand due to de-lid craze, and people buy it.

For the record, we were delidding 15 years ago here on the OCF. You might say we WERE the super enthusiasts of that era. We didn't call it delidding, we just said we were removing the IHS (and most of the time we left it off). Almost everyone used a razor blade to delid back thern. Search for IHS removal and I'll bet you find some posts from around 2002.

I always used the razor blade. And never killed a CPU.

Used to hang around for a long time

Still, that changed a year ago or so, did it not?

What changed about a year ago was that overclocking and benchmarking started getting corporate sponsors and publicity.

Tir (long name I can't pronounce), I posted my best 32M SuperPi already. If I happen to get a better score, I'll post it.

I suspect the average age of active members on this forum is higher than most others... hands up if you remember when CPUs came topless as standard? Think we were more worried about chipped cores in those days...

batboy said:
What changed about a year ago was that overclocking and benchmarking started getting corporate sponsors and publicity.

Tir (long name I can't pronounce), I posted my best 32M SuperPi already. If I happen to get a better score, I'll post it.
Click to expand...

Sorry, I missed it

Name of the island of eternal youth in Celtic mythology
W

Tír na nÓg said:
Manufacturing and shipping cost are peanuts... Price are that high because of high demand due to de-lid craze, and people buy it.

I don't think that demand is so high. If you count how many users are delidding then it's actually only few, even for enthusiasts. In some countries 1 tool has 10+ owners. In Poland whole forum shared one 115x tool or one guy was delidding for others. In total delidding tools for 115x were available about 2 months after all the noise in the news. Still der8auer tool was available half year later when all who wanted, already got other brand tools. Now think how many users got 2066 chips ... and barely anyone decided to delid them. So I just think that high price is caused by very limited demand so they have to cover costs of designing and production even though it looks pretty simple.


mackerel said:
I suspect the average age of active members on this forum is higher than most others... hands up if you remember when CPUs came topless as standard? Think we were more worried about chipped cores in those days...
Click to expand...

I actually like that as on most other forums you just can feel stupid kids with too much money trying to prove others how good overclockers they are using someone else's basic guides.
OP

Yeah, we have a diverse group of folks here. We even have stupid old retired guys with too much money trying to relive their glory days to offset the stupid young guys with their parent's credit card.

Hey, I looked at my join date shown under my avatar and I know that's not right. I joined the forum in 1998 I think (at least 2 years earlier than what it says). I remember being a lurker on the forum for months and got a Celeron 300A. My first post was about how to overclock it more. I used an adapter called a slotket. Raise your hand if you remember that Intel once used a slot for mounting CPUs (Pentium IIs), instead of a socket. Photos I have of that Celeron 300a are from late in the year of 1998.

But started overclocking on the late (2010 Phenom II 955, 650 Honda Transalp rads cooled, and then bong, lol), but with some other nickname
Last edited: Oct 23, 2017
You must log in or register to reply here.