DDR4-4000 in quad channel is pretty impressive too. Nice overall OC on that rig, Woomack.

I was looking at your results, and out of curiosity, ran an Aida bench and have a much faster l3 cache. Is the CPU cache that significant for those metrics? 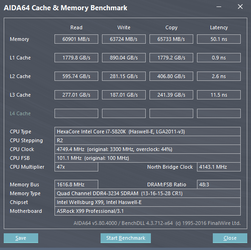 Thanks. Now I'm trying to set 4x16GB at 4000 but I stuck at not much above 3733. 2 sticks run at 4000 but 2 are always missing regardless of settings. It's still some improvement comparing to ASUS but I was expecting I will set that 4000. Maybe when new BIOS will be released as this one is 1.00. Board arrived with beta BIOS and it's early review sample so I bet there will be updates soon.
In general ASUS OC 8GB sticks a bit better while ASRock OC 16GB better. In both cases end-user can count on about the same.
I couldn't stabilize 8 sticks at 3200+ but I guess not many users are interested of that

@ Tír na nÓg
Intel made changes to cache and in the last series, L3 is just really slow. It's normal and I guess that applications will use rearranged cache better in some time but now it's the main reason why some benchmarks have worse results than on older CPUs. Quick example, 3DMark and low physics scores. 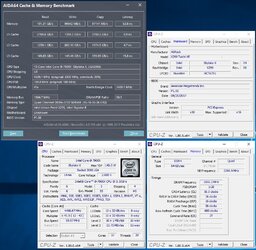 Tír na nÓg said:
I was looking at your results, and out of curiosity, ran an Aida bench and have a much faster l3 cache. Is the CPU cache that significant for those metrics?
Click to expand...

Yeah totally different CPUs. Your 5820k uses a ring bus and the newer skylake-x CPUs use mesh. Here is my xeon on x99: 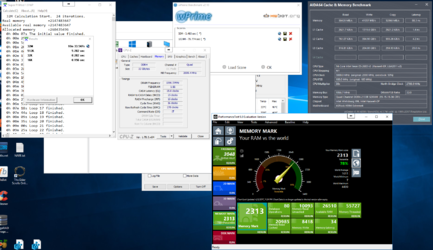 Figure I'd bump this thread instead of starting my own.

Just delidded my 7920x and I'm happy. I am still playing with it but prime95 temps have gone from ~95C on the hottest core to ~81C. Not a bad drop, nothing like my 7700k but I wasn't expecting that. With temps coming down a decent amount I may try to OC a little more.
You must log in or register to reply here.