Please Advise Improvements on This Build

What do you want to do with it? Hard to help improve something when we don't even know what its for.

As ED asked, what will your primary use or uses be for this build? It's mostly appropriate as it is for high end audio\video\graphics manipulation. And if you will be using it a lot for that you need to give more attention to your storage. If you will be using it for gaming primarily, you would be better off with a 6700k, at least better off in the wallet and with equal or better performance in games.
Last edited: Nov 1, 2016

If production focused with a side of gaming, everything else looks fine, though I'd question the need for the 6850k over the 6800k. If you want to SLI, sure, and the PSU is right for that too. If no SLI, drop PSU to 600~ and stick with a 6800k assuming content creation

He can easily SLI 2 1080s and an intel chip with a 650w psu...they are 180W cards. Cpu is 125W. You an overclock both even. The only time you will get close to 600W is with EVERYTHING overclocked and running a stress test on both cards and cpu.

I know he CAN run on 650. But not all 650 units have the required PCIE connectors. I'd say 750w will be reasonable because almost all have multiple PCIE connectors. I'm running an i5 with a 1070 on a 450w so I'm not really arguing wattage haha more around practicality.

Correct... not all do. Good point! He just needs to pay attention if he plans on going SLI.

You know my opinion on power supplies...I don't like to run them near max load.

You are overestimating on the CPU, mobo, etc...

Its right at your limit, but, this is not a problem to do on a quality PSU. This is why they are purchased, to be used.

But - it's the engineer in me that is conservative!

I think you'll find X99 is not quite that efficient?

But - it's the engineer in me that is conservative!
Click to expand...

Yada... I have 5 fans and custom watercooling with a 24W pump... I have actual numbers.. not theory for the hardware listed for Pete's sake, LOL!

It will be fine.. except for the most puckered of people.

But - it's the engineer in me that is conservative!
Click to expand...

How are you getting these wattage values? Are you running a kill-o-watt meter or using an ammeter and multimeter to calculate power draw?

Lochekey said:
How are you getting these wattage values? Are you running a kill-o-watt meter or using an ammeter and multimeter to calculate power draw?
Click to expand...


Here is a shot of my system right now, running folding at home (my UPS says I am drawing 720 W total power right now) 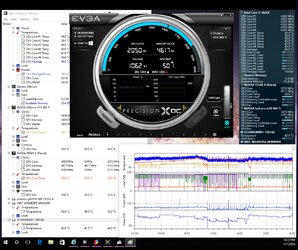 The CPU (by the screenshot) is drawing 80 W.

Agreed - I was answering Lochekey's question.

Best of luck to you (read: anyone) trying to reach that without voltage control/the meager volts it does raise.

What is your power use with the 1080 when folding? folding and overclocked?
B

200w for cpu + mb seems pretty fair for an extremist/enthusiast overclock. For a nominal 24/7 system, this number is obviously "high", but a friendly number


obviously a gtx 1080 is rocking a 180w tdp, and due to power delivery and efficiency, has very few "spikes". On a stock system i7 6700k and 16gb of ddr4 ram, using specialized equipment, total draw came out to 178w on a single gtx 1080 with boost clock enabled while stress testing. Thats rather astounding. Overclocked results in gaming brought total consumption to 206w.

A 750w psu gives you a 14% headroom that frankly, will never be seen nor needed. 650 is running at the bleeding edge tbh. 850 gives ~25% headroom, but still not in the "overkill" territory yet imo. Anything more than 850 is ridiculously unnecessary.

I think 750w is the right call. Gives some leeway for current spikes (startup current is a thing ladies and germs), but keeps the cost in the "this is ok" category. 850+ psu's typically have a ridiculous markup for some reason. For a single card, obviously even 750 is laughably over the top, but does limit upgrade path.
You must log in or register to reply here.