So I tore down my loop because tubing was looking nasty. When I got to my 980ti hydrocopper I noticed what I think is some corrosion. What would cause that? Also what would cause all that gunk that's all over inside the block? Plasticizer, bio growth, or both? First time cleaning this out and just wondering what I did wrong. 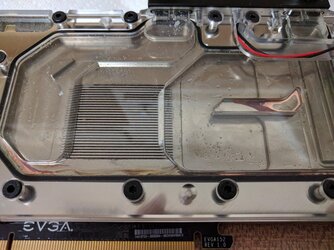 I see plasticizer, and some particulate debris from probably not cleaning your rad before assembly.
B

Totally agree with MR.scott comment
And as u might be mixing metals and as its impossible not to. The corrosion would b its result and it will keep increasing if step not taken. So get some anti-corrosion thingy in ur loop too, though m not fimilar with any. others might help u with that.
OP
S

I did shake and flush the radiators until I didn't see any debris but apparently I was not as thorough as I thought.

Sarp23 said:
I did shake and flush the radiators until I didn't see any debris but apparently I was not as thorough as I thought.
Click to expand...

It happens. After a little while more stuff becomes dislodged.

That looks similar to what happened to my EK CPU block, all the nickel plating flaked off, there were some thins spots in it and it wasn't the best plating job EK did, they had issues with some of their Plated products a few years ago iirc, but have since resolved the issue supposedly. I think I just got one of the older blocks that was a bad plating, but it still cools and since I took as much of the cracked plating off myself it doesn't to appear to have gotten any worse.

I would surmise though Mr. Scott is also correct in that is dirt that was left in the rad, probably trapped in any flux that may have been left from the rad assembly process. It did it to me also, that and I found acetel shavings inside my block fins from where the machining wasn't done as well as it could have been, after a few cleaning it's all out and runs like a champ.

t1nm4n said:
all the nickel plating flaked off
Click to expand...

My thoughts exactly. I blieve this is what were seeing. Copper is clearly visihble atm in certain spots.

I'm not sure if the tubing, liquid or bad plating is to blame or all of the above. I can only advise on a complete tear down and flushing your gear. Speak to EK and see if they advise on using the block or if it will deteriotate more with flakes circulating around the loop and possibly causing more damage.

This is what I found about Mayhem's fluid. 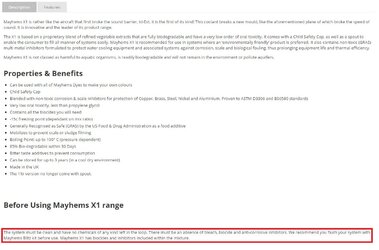 I would see other reputed mfgers for clear premixed fluids and PrimoChill Advanced LRT for tubing.
You must log in or register to reply here.