I'm looking at a new build. I'm thinking an ITX build. I've never had a case that fit on my desk before. I think that would be pretty cool. I'm not sure about components, though. I'd like to overclock on air (possibly with the Dark Rock Pro 3 from Be quiet! I've read good reviews about that cooler...if anyone has other suggestions for air cooling, they are welcome...I'm not quite ready for water cooling yet. The possibility of leaking scares me a little bit). I was also thinking of switching from a 2.5" SSD (which I have now) to an M.2 (1 or 2 TB...suggestions here for good drives would be welcome, as well...I have a Samsung 2.5 SSD right now, I could just stick with Samsung moving to an M.2...I haven't had any complaints about the SSD I have). I was thinking about the M.2 because with an ITX build, of course there is not much room, and I'd like to have as much room as possible for the video card. I have 16 GB of memory now, and I'll probably stick with that. That seems to be a good amount for a gaming pc (which is what I'm trying to build).

As far as the card goes, I've been reading that AMD is working on a 7 nm process for either a refresh of Vega or a new Navi card, or both, for next year. I've thought about the RTX cards from Nvidia, but even after they came out at really high prices, I've read that Nvidia will possibly come out with another new card to compete with the 7 nm card from AMD, and that the RTX series will be the shortest life span of video cards Nvidia has ever had. So I'm not sure how much room I would need for the video card in an ITX case, and I won't look to really build this until next year when AMD's new cards come out. However, if I could get some suggestions for cases with good airflow, that people have had success with using aftermarket air coolers (where the coolers actually fit in the case), that would be great. Also, I guess I will need a recommendation for a PSU. I have looked at SFX PSU's, but none of them I've seen are very powerful. The largest watt PSU I see on Newegg for the SFX form factor is a 600W from Corsair. Am I correct that an SFX PSU is really the only one that will fit in an ITX case? I have seen reviews of a few cases, and they can use bigger PSU's, but cable management is not great. I guess I wouldn't need it to be very powerful. Right now I'm using an 850 watt PSU from EVGA. I don't mind stepping down on wattage a bit, I would just like it to actually be able to run everything in the case.

Lastly, since this is my first ITX build, a recommendation for an ITX mobo would be great too. To go along with that, I was thinking of switching from Intel (which I have now) to AMD Ryzen for this new build. I know Intel just released the 9900K because AMD has finally offered up some competition in the CPU market, but Ryzen seems to be more competitively priced for just about the same performance (except perhaps the 9900K, but that is too expensive for me at this point...$580 on Newegg). So what do you guys think? A Ryzen build, or do I stick with Intel? I'm using an i7 sixth gen processor right now, if I wanted to keep with Intel, I guess I could upgrade to a nine or ten series i7. Is the Ryzen 7 (or 5) competitive now for gaming machines, or is Intel still good?

I know this is a lot to ask at once. Any suggestions/responses I can get would be much appreciated.

From personal experience, you really need to look at going with an AIO water solution for cooling if you will be building a mini-ITX sysetem. Many ITX cases don't have a lot of clearance for good air cooling. Some are better than others but most of them won't have enough room for top tier air coolers. Really, mini-ITX begs for water cooling. AIO water systems are no more difficult to install than air coolers and they free up a lot of interior room. Yes, AMD CPU products now deserve serious consideration.

As with air coolers, you will face some limitations on the length of the video card if you go with a mini-ITX build.
W

Most Intel motherboards are better than what the same manufacturers make for AMD. There are little differences but still count. Personally I like ASRock offer and their Z390 or X470/B450 ITX boards are simply great. From cheaper boards I can recommend MSI.
I see no problem in motherboards as you can find really nice ITX options for both CPU series. The main issue is to use higher wattage graphics card in a small ITX box ... so it won't be loud or won't throttle because of high temps. In every ITX build I had, it was the issue as you can't make it run really quiet if you want small PC case.

Regarding PSU I highly recommend to take higher wattage 80+ Gold/Plat unit than you need ... if you decide on a small case. It's because higher wattage units are not heating up so much. In my PC (that really small case) I had Corsair 450W SFX Gold 80+ PSU. It was more than enough for the setup below, but it was getting hot and fan was spinning at max speed under any higher load. It was also heating up air in the case. When I switched to Enermax 650W SFX then PSU fan was spinning slowly under full load and PSU maybe wasn't cold but had not much higher temp than the ambient.

Cooling depends on many things ... like case size or if you want/can use water cooling. I would first check how much space you need for the case and next start looking for cooling. If you won't overclock the CPU high then you can find smaller coolers which will be good enough.

Right now I have something like this and it's not quiet under full load but for most of the time it's actually quiet as barely anything makes it work above 50% load:
[email protected] on all cores 1.15V max / Cryorig C7 Cu
16GB HyperX Predator RGB [email protected] 1.40V
ASRock Z390 Phantom Gaming-ITX/ac
Enermax Revolution SFX 650W Gold 80+ PSU
Kolink Rocket ITX case
GTX1070 FE @stock

Since I have some photos of my PC then here they are: 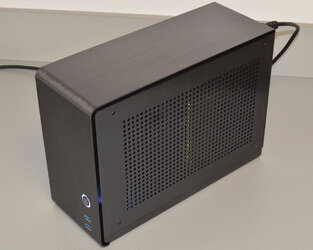 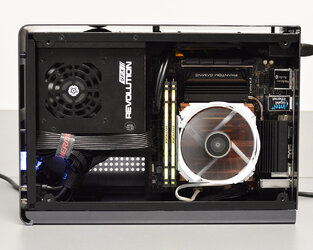 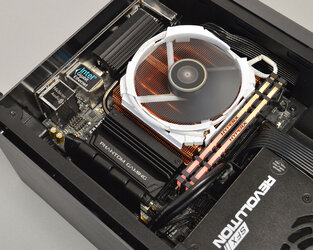 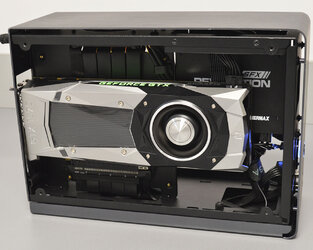 Thank you both for your responses. After looking at a few more reviews of ITX cases, I've found out you're right. It's better in a case as small as ITX to do at least an AIO cooler. So now the question is (since I've never done this before) do people usually find a cooler they like first and find a case it fits in, or do they still go with the case first and then find a cooler that works with it? Does anyone have AIO cooler recommendations? Also, noise is a big deal with me, and I have seen (a lot like the pictures of your case Woomack) that people go with a blower style card in smaller cases because air flow isn't great. I have seen smaller third party cards (Gigabyte has a 1080 mini card, Zotac I believe has a 1080ti mini as well) and I'm hoping with whatever AMD and/or Nvidia comes out with next year with the 7 nm cards that some AIB cards will work in ITX cases. Does anyone use an AIB card in their smaller mATX case or regular size (but still small) ITX case? Or are people basically going with just the founder cards, with the blower style cooler?
W

All ITX GTX1060/1070 I've seen are quite loud in small cases under full load. I have GTX1060 ITX EVGA SC and it's just loud. To make it acceptable, I have to manually limit fan speed to 30-40% and at least my card is not throttling much or not at all but there is no way it can be overclocked.
Blower type of coolers are not as great as people say. I guess that many were not comparing them directly. All depends on the cooler design. They in fact remove hot air but their air pressure isn't really high so they are not removing as much hot air as we wish. What can't be removed is heating up the card and fan has to run faster.

Regarding CPU cooler.... all depends on the case you pick. AIO work about as good as larger tower air coolers so if there is a space then both will give similar results. Price is also similar. Check cube type cases. In some of them it's possible to install ~160mm tall air coolers. Some ITX case have space for 240/280 AIO and it's about the best option for CPU but also it requires a much more space.
Remember that for any cooler you will need some airflow.

Find 2-3 cases that you like and check how components can be installed. Usually there are options that can be replaced.

Some cases use SFX PSU, some use typical ATX. You can always install SFX PSU in the place of ATX to save space and improve airflow (cables are shorter and PSU is smaller). The best is to buy about 550W+ unit (for 1 ~100W TDP CPU + 1 ~150W gfx card) which runs semi-passive (like up to 50% load passive) so it won't generate additional heat and will be quiet.
You must log in or register to reply here.