i'm running prime 95 for about 10 mins it kept saying pass pass pass on all the cores
assuming that's what the 4 windows inside the big window means
i open up the local file it says hardware FAILURE open stress.txt for more information

and i noticed that one of my core temps was 40c when the other ones were around 49c and higher. i scroll down just a tad bit more and i noticed the core is only working about 48% 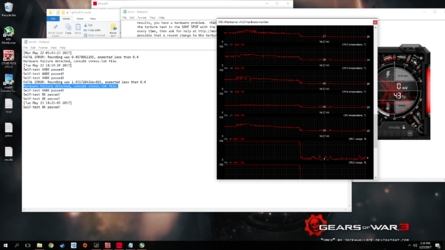 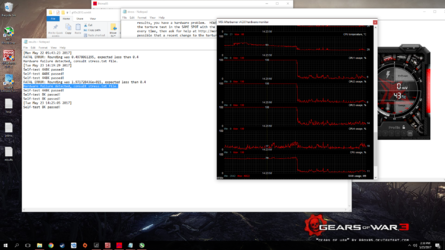 One of your cores is at idle because as soon as P95 reports an error it stops the worker on the core that produced the error. The resulting usage you see on the remaining core is probably just for running background apps and Windows since Windows would likely shift the workload of maintaining the OS to the one core that is not doing anything. If you look at the usage as soon as the program starts up, you should see all cores at 100%. Hardware failure doesent necessarily mean anything other than that the core is not stable. My guess is it's just a lack of voltage. Up the vcore and that will probably fix it. If it's truly a hardware failure, then you should be able to set the BIOS to all default settings and clock speeds and still produce the same error. Further, a true hardware failure on the CPU would likely result in a BSOD or failure to boot.
OP
D

thanx for the REPLY(yall replied quicker than toms hardware =)

ummm.... so.. should increase my volts to 1.3v.. im going to use this cpu long term and i dont want to burn this CPU is there anything in my bios i should change when im OC besides CPU RATIO and VOLTS
OP
D

You could also try Prime95 27.7 which has AVX1 but not AVX2. AVX2 instructions take a lot more voltage to be stable. AVX instructions are not used at all in most applications. They are used mostly in scientific niche applications.
S

Also you dont really need to be AVX2 Prime 95 stable for daily tasks, gaming, ect. My computer drops an error on one core within one minute of running P95, but I've gamed on it more than 50 hours on the same OC settings and it hasent locked up once and it passes Intel Burn-In test fine. I would recommend using Intel Burn-in test to confirm stability as it's more accurate for real-world use.
W

AVX can provide a significant performance boost for software that uses it.

Running AVX can also take your temps sky high. I was running OCCT on a 4790k cooled by a Meglahem and was in the 60's without AVX. As soon as I enabled AVX, the temps shot up to 85 and OCCT quit because 85 was the cut off temp.

Daddyjaxx said:
Running AVX can also take your temps sky high. I was running OCCT on a 4790k cooled by a Meglahem and was in the 60's without AVX. As soon as I enabled AVX, the temps shot up to 85 and OCCT quit because 85 was the cut off temp.
Click to expand...

Do you refer to AVX or AVX2?
You must log in or register to reply here.