So its seems to be a heat issue. It could help... I don't know for sure though. I really think your best bet is to do the right thing and get your case airflow right, and get a proper motherboard.

I don't have any extra fan so I ordered a Cooler Master Hyper 212 Plus as suggested. If it doesn't solve it I will consider changing my mobo.

Well, at this point the cpu cooler is the last thing I would have ordered... But.. ok. Let us know when you need a motherboard.
OP
D

you said "get your case airflow right, and get a proper motherboard."
So let's first fix the airflow problem cause even if I get a new mobo, I need a better airflow anyways.

If I can avoid spending money for a new motherboard (and mostly avoid having to take this one out..) I would be more than happy so I will replace it only if no other solution works.
Last edited: Jan 6, 2015

The cpu cooler isn't fixing your airflow problem much though. That would be adding intake fans or spot cooling on the power bits.
OP
D

The CM Hyper 212 Evo is a HEATSINK for cooling the CPU. It has a fan on it, yes, and will help, but very minimally in this context. We don't know if that is even a problem yet though!

The problem is that your motherboard can't handle this CPU on load. It is because of its weak and UNheatsinked power delivery area. We suggested to put heatsinks on THOSE and improve the airflow inside the case. You can spot cool that power delivery area as well as putting on heatsinks. Overall you need to have some intake fans on the case as you have no fresh air being forced into the case which would help with overall airflow as well as spot cooling.

Are we on the same page now or is there something else that needs clarified?

I also said the Hyper 212 Evo, but... that really won't make a difference as the Evo is just newer and performs ever so slightly better to cool the CPU.
OP
D

Thanks for the clarification I thought the CM was like a fan. So I've cancelled the order. I can buy any cheap fan like this one?
http://www.ebay.ca/itm/120mm-x-120m...omputer_Case_Fans&quantity=1&autorefresh=true

And is it worth to buy heatsinks like this for my mobo?
http://www.amazon.com/dp/B004CLDIHK/ref=cm_sw_su_dp?tag=overclockdotnet-20

What were saying is the Cpu cooling is likely not the issue. The issue seems to be that lack of airflow through the case and also over the Vrm section of the motherboard. The motherboard you have has a 4+2 Vrm section without heatsinks. The Fx 8320 chip require a stout motherboard in order have the proper voltage supplied to it when required at heavy loads. You board being a 4+2 Vrm has to work hard to keep up with the demands of the chip which is likely overheating them. The board is most likely freezing up because the motherboard is trying to save it's own life. When we say you need more air flow we're talking through the case and specifically on the Vrm section. You should be able, if kept cool enough, run the 8320 on the board you have. I am going to post a picture of the area that we would like to see you try and cool off in order to try and get this situation solved. This all said, a warning for you, if the motherboard Vrm section fails it could take out the Cpu and other parts with it. We recently had someone with the same board have it fail and take the Cpu with it. 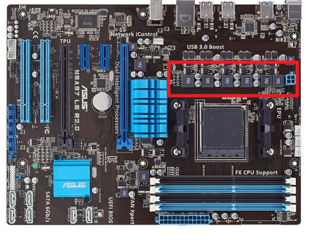 Ok I got that. So to cool off my VRM section, I will first add a fan behind it.
Next step would be to add heatsinks like the Enzotech MOS-C1 MOSFET Heatsinks, no?

If you could give me a hint on how to install them, I would like to try it.

Stick em and go. They come with themal tape and you stick the tape on the heatsink and cover up all of those SMALL squares at the top of Mandrake's red rectangle.
OP
D

Ok so just so it's clear, by the small squares at the top of the rectangle, you meant the ones in the blue rectangle on that pic? On those in the green one? 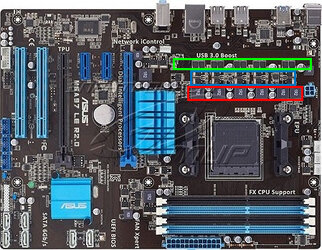 The answer is yes, but in all honesty, if you can return that board, I would and pick up something better and a decent H/S for the CPU you'll be much further ahead then wasting time and money on a board that just isn't suited for the task of running an 8 core FX CPU.

Johan45 said:
The answer is yes, but in all honesty, if you can return that board, I would and pick up something better and a decent H/S for the CPU you'll be much further ahead then wasting time and money on a board that just isn't suited for the task of running an 8 core FX CPU.
Click to expand...

Exactly. Get a board, improve airflow in the case (which is not done with the CPU heatsink).
OP
D

If i try to return it how should I put it? I mean should I say that it's defective, it overheats and I want to change it for a better one?

If I say "it's not heatsinked so I want a heatsinked one", will they tell me that it's my fault, I should have checked this before buying and they can't do anything for me?

I bought it at beginning of July 2014

Return it? It's a perfectly good motherboard, just not for that cpu and with your (lack of) airflow. Sell it and buy another.
OP
D

Doubtful. It's the same thing.

Wait for someone that knows amd better to come by...