So I'm new to overclocking. I've been reading a number of forums and guides. I upgraded on a budget from an fx 4100 and hyper 212 plus and hd4670 gpu.
I was able to overclock slightly and be stable just booting windows 7 at x19 cpu on a 200 mhz clock at auto voltage on cpu core. If I changed the stock voltage up or down slightly it became unstable just booting windows. I used the guide below which was for an asus mobo, but I suspect the principles are about the same. (my current hardware specs are below along with hw monitor and cpu z screenshot.) If this is about the best I can do stable, I might as well stay at stock and have the boost get me up to 4.2 occasionally rather than just be at 3.9 on all cores. Also I haven't even run any test software which would show whether it's actually stable using occt or prime95 or hyperpi.
Guide I used:
https://www.overclock.net/forum/10-amd-cpus/1350335-amd-fx-8150-oc-cm-hyper-212-evo.html

I've also been reading about LLC on cpu or load line control/calibration. Sounds like that is supposed to keep the voltages more stable as the cpu goes on higher loads. I couldn't however find any setting on my mobo bios for this. I have updated to the newest bios update for my board. It's old of course with the latest being perhaps 2013.

So I'm curious what you guys would suggest for trying to get a stable oc a bit higher given my current equipment???

Thanks for any suggestions!!! Cheers!

P.S. My cpu-z scores are currently at stock on the CPU. I went back to the stock config since the 3.9 was barely stable and not much of a step up from stock.

Also, I don't believe heat on the cpu is at all the issue, since I believe the highest I've seen is around 46' C in a 75' F room while on the most demanding game I play.

I would think that your listed setup/combo should be able to overclock (some??) beyond default stock auto settings.

It has been quite some time since I've run a 1st Gen Bulldozer or even the later 2nd Gen Piledriver (Vishera).

I looked briefly at that OCN guide thread link... You should give this OCF sticky linked Bulldozer OC Guide a read as the methods should be applicable for your setup as well.

I'm sure others will be along to comment further...
OP

I will check out this sticky.

I'm going to assume you meant GA 970A UD3 rev 1. There were allot of issues with the early revisions so don't be afraid to ask questions. Those older FX chips didn't really have great memory controllers, it might be advised at least for now to use just 2 sticks of ram till you get your OC stable just to help eliminate any issues from the ram.

Tell us more about your RAM. All we know is the number of sticks and the total amount. What frequency are you running it at? Those CPUs, as bassnut said, had weak IMC's so it could be a challenge to run more than 8gb of RAM at more than 1866 mhz when overclocking.

"bassnut" and "trents" both make valid points... It would be good to know a little more about your memory sticks?

Is it a quad kit or two separate dual kits? You should post up a CPUz SPD tab screen shot for one of your sticks if they are all the same.


I prefer to use HWiNFO64 vs. HW Monitor for CPU/Mobo/temps etc. Perhaps you could post up a screen shot showing your setup at stock/auto while stressing with something like AIDA64 CPU/FPU stress test for a starting point moving forward? 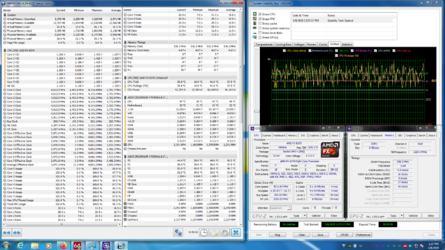 I can definitely find the specs on the RAM and show what they're running at currently. They are 2 sets of 2 4gb chips, so thanks, makes sense to try with one 8 gig set first to build a stable cpu overclock.

PolRoger, Once I have a chance, I will pull up the suggested programs and get more info to show you guys.

After running a default/auto "base line" run with your combo so we can get an idea of BIOS voltage defaults...

I would test an initial overclock first with just 2 sticks at ~1600C9 memory speed and try to bump up your cpu from stock 18x200 (3.6) to 20X200 (4.0) with HTT and NB both set to 2200Mhz. Test to see how high your cpu can scale with just straight multi before trying out combinations of multi along with higher HTT/(bus) and higher hyper transport and CPU NB speeds. Once you get a better idea of how your cpu sample clocks then raise memory speeds, install additional sticks and tighten up memory timings. 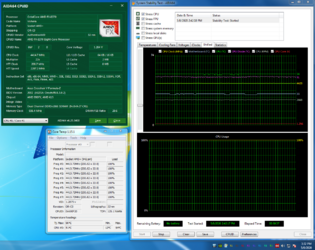 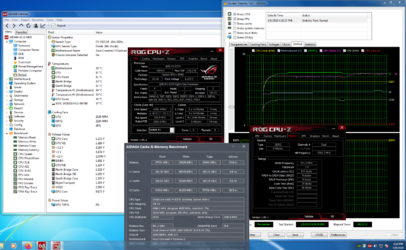 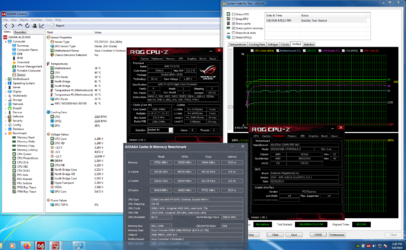 One other thing that I recall from overclocking FX CPU is to monitor motherboard VRM temps. They can overheat on the motherboard which will limit overclocking potential. I have a 92mm fan running over my VRM heat sink. Note the difference in motherboard temp sensor #1 (VRM) between those last two AIDA64 runs.

Assuming all your memory sticks are the same, that would supply all we need to know about your memory and the settings you are currently running it at.

Having said that, are all the sticks the same make and model and speed? While in the SPD tab of CPU-z click on the memory slot selection drop down box to check that if you are not sure.
OP

I took a pic of my RAM sticks. I put back in the 14900 older RAM. Realized the new 2 sticks I bought at 12800 since that's what seems to default on my mobo when with 2 sticks. Drops to 1333 when 4 sticks are in there. I suppose the weaker CPU memory controller you guys mentioned might be the reason for that.

I also posted a pic of the other info you asked for. Including with a 10 min cpu/fpu stability test on AIDA64. That was with just the 8gb 2 older sticks of RAM. 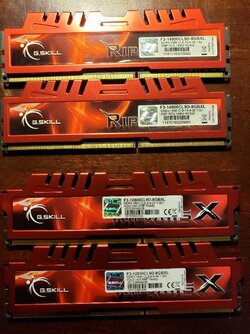 Ah, the problem is apparent now. You are mixing RAM of Different speeds and timings. A no, no when overclocking.

The top kit is 1866 speed from 2011 with Micron IC lower density (2R) dual ranked/doubled sided with chips on both sides of the sticks (16 total).

The bottom kit is 1600 speed from 2020 with higher density (1R) one ranked/single sided with chips on just one side of the sticks (8 total). I not sure who manufactured the IC for that kit??

I would go ahead and test with the older 2011 1866 speed kit to find out what kind of overclocking margin your CPU/Mobo combo has?

You may be able to run both kits together but it is not ideal and it may impact your overclocking results.

After finding out the limits of your combo with the 1866 kit I'd test the 1600 kit by itself to see how it runs in comparison to the 1866 kit and then I'd follow up by testing with both kits together.


Edit:
From your base line run above It seems your cpu is showing a VID request of ~1.275v for 3.6GHz load and your board is drooping Vcore down to ~1.25v load. The NB speed defaults to 2200MHz while Hyper Transport speed is defaulting to 2400MHz speed. Memory speed/timings and voltage looks fine. I would suggest manually increasing Vcore in BIOS to ~1.375v and bumping up your multi to x20 (200x20=4.0) to see if you can boot into windows and run a quick test for stability? Also disable Core Performance Boost... You want to be running a straight all core clock of 4.0 with no additional boosting.
Last edited: May 9, 2020

And check your motherboard manual to see which slots should be populated when using only two sticks of RAM. Actually, I would recommend starting with the PC3 1600 mhz (aka, PC3 12800) kit first. It will put less strain on the Integated Memory Controller (IMC). A higher overclock of the CPU generally trumps running at a higher RAM frequency when push comes to shove.
OP

Ok, gotcha, mixing RAM is a no no!

I will try one set of RAM. I have it in the proper spots according to the mobo manual. I will try running the RAM at 1600 and whatever it defaults to on timings.

I get turning off the Core Performance Boost. Should I disable all of the power management stuff in the BIOS as well?

It probably wouldn't hurt to disable the P.M. stuff and then when you finish dialing in your settings you could enable them again.

I can try the tighter timings on the RAM. Yes that's the kit I bought back in 2011 with the other hardware. 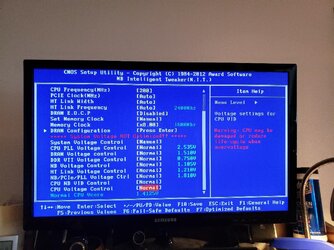 Leave memory at JEDEC 1600C11 for initial CPU OC margin testing. You want to find out how well the CPU clocks before addressing memory speeds and or timings.

ah gotcha. I left the ram at default settings for now.

I'm really grateful for the patience and detailed info.

Good start... You made it into Windows and ran a brief stress test!

Temps look OK but you will need to run longer stress tests to get a better idea of stability?