So I tried to treat myself a little while ago but life got in the way. After a long, frustrating year, I'm finally back to a place of financial security and now that I've got my personal issues sorted out, it's time for a little luxury!

I haven't decided on a cool name, but I have decided on a color scheme: Black and red. I'm not going to do anything overly extravagant except an eventual custom water loop, but no fancy case modding. Unfortunately I can't buy everything at once, so this will be a slowly updated thread, but there will be pictures! Only thing I have a picture of right now though is the monitor. Anywho, here are the parts I'll be using:

I'm hoping to have the case, PSU, and GPU by the end of March/early April. Y'all feel free to suggest some names, I was thinking something corny like Crimson Shadow. I might swap the 6500 for the Ryzen 4c/8t CPU when it comes out, if I can find a black and red AM4 board that isn't too expensive. Also considering getting a Hyper 212 Evo and putting some red Corsair LED fans on it. What do you guys think? That case already has a HUGE 200mm LED fan on the side of it. I think that's too much LED for my taste. Needs moar RGB.

Also, I was wondering if it's possible to replace the fan on the PSU with a red LED one? So many possibilities. I might just tear all of the fans except the 200mm or if the case and replace them with Corsair RGB fans. Thoughts?

Anyways, that's all for the main post. Here's the PCPartPicker link: https://pcpartpicker.com/list/p3cxNN. Here's the picture of my monitor: 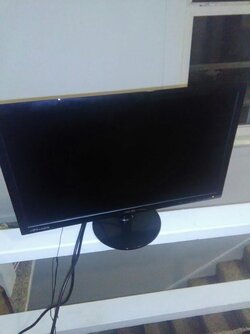 the biggest cuts were the mouse and motherboard. Motherboard H110 loses some things from the H170 you had, but oddly, nothing you'll actually MISS - still have the 16x gpu slot, only 6 instead of 10 SATA ports..but how many will you actually use, 2? 3 at most? And this adds an M.2 slot, though it will eat 2 SATA ports if you use it. the cpu and mobo won't overclock at all, of course, but it will game great.
OP

the biggest cuts were the mouse and motherboard. Motherboard H110 loses some things from the H170 you had, but oddly, nothing you'll actually MISS - still have the 16x gpu slot, only 6 instead of 10 SATA ports..but how many will you actually use, 2? 3 at most? And this adds an M.2 slot, though it will eat 2 SATA ports if you use it. the cpu and mobo won't overclock at all, of course, but it will game great.
Click to expand...

Haha I wanted a color theme and red and black is the first thing that came to mind. I wasn't aware the 480 is faster than the 1050 though...Then again I never really checked. I mostly based it around that Apevia case because I knew I had to have it with how many fan mounts it has, and it only comes in red and black or blue and black. Thanks for the tips though! And I have two separate modules of RAM so that I can buy them one at a time. I'm not gonna have the money all at once for a while so I'm buying the cheap stuff like keyboard, mouse, case, RAM, etc first, working my way up to the CPU and video card.

my suggestion is to save it up. prices usually come down over time, so you save money getting it all at once. one exception right now is an SSD. due to a NAND shortage, they are expected to climb all year (and are up a LOT since christmas. a 960-1.1 TB SSD was down at $199 in December, and is up to $250 now.) so, go ahead and get the SSD now. prices are expected to drop again very late this year and into 2018
OP

So a bit of an update.

After talking with Dalchi Frusche I believe he will be designing a custom case for this build! We don't have any sketches yet but as they come along and the idea shapes itself I will be posting some rough drafts and eventually let y'all see the finished product.

I also believe I've secured the CPU and SSD, found a good deal on a Corsair MX300 750GB SATA drive from a friend, he opened it for a YouTube review but never really used it beyond that so I got it at an incredible $160 USD. $30 more than the SanDisk SSD I was going to use for almost twice the storage.

On top of that I believe I also have an RX 470 in my sights. If everything goes according to plan, the components should all be here by the middle/end of April and I can start showing y'all pictures and documenting the build process. Have a makeshift test bed I'll be using as my "case" until I get the one from Dalchi later this year, pictures of that to come once I finish getting it together.

I'll stick around to see how she turns out. You know I love a good build. A side note on Apevia cases, not sure if you've owned one, is the metal is a bit thinner than on the Rosewill cases. They're O.K., just be mindful when moving it around as it's pretty easy to bend the frame.

It is possible to replace the 600W BQ fan, however you will likely void the warranty by doing so. Also if you mount the PSU with the intake fan pointed down (I would recommend this) then the LEDs wouldn't be visible. The EVGA 600W BQ uses a 120mm fan.
OP

I figured it'd void warranty, I was more worried about damaging the PSU in a way that when I turned it on it'd blow up and take some parts with it. I don't know if face down is an option as I might have to have my case on the floor. I don't even have so much as a small stool to elevate it off the carpet. Might look into grabbing a small table from Ikea, give her a pedestal.

I briefly considered building my own desk, and even making this a desk PC but I decided to get one of those old solid oak desks that were popular a few years back before the flimsy cardboard ones became the norm. My local salvation army/goodwill has a few usually.

You could always put a small piece of board under the case if you have carpet. I've done this and if it's trimmed right you can hardly see it. If you have pets though it's best to have them up and away from the fur balls that will eventually shed. If you do decide to crack the PSU open be super careful inside. There are capacitors in there that can/will take your life without hesitation. Generally you should never open them up.
OP

Yeah, I'll leave it be. I saw a PSU a few weeks back that came with an RGB fan but I can't remember the name and I'd imagine it costs a fortune. I'm not trying to bow money where it's not necessary, ya know?

Might have been, though the picture I saw had the fan in a rainbow configuration.

I will be grabbing the power supply, case, and keyboard first. I get paid on Tuesday so they should be here either next weekend or the following week. Also, since Ryzen 5 will be here on the 11th, I'll be foregoing the 6500. However, I have a question for you guys. In your opinion, should I get a 6c/12t, or a 4c/8t for gaming? I just don't want to buy something I don't need.

Also, I've commissioned Dalchi Frusche to build a custom case for the rig. It's still on the drawing table, but I expect great things! Thanks again Dalch.

4c/8t for most games is fine. Look at what games you play. There is a growing number of games that will use all available cores and many game devs are claiming that's a trend that is going to continue. Only time will tell though.
OP

I have a range. From older 2010 titles like the original Assassin's Creed, to newer ones like Far Cry Primal or Ghost Recon Wildlands. The AC, Far Cry, Witcher, Elder Scrolls, and Tomb Raider series are a good part of what i'll be playing though.
OP

Had some unforeseen expenses and wasn't able to order things when I was hoping but we're back on track and the GPU and PSU are on their way! Pics will come when I get them.

A few changes I've made to my plan. This is the final parts list:


I also have a couple of Phanteks case fans on the list, just to have something that's better than the "stock" fans. Anybody have any experience with the fans Corsair puts in their cases?

I don't know about all their cases, but my 750D came with AF140s. Seems yours comes with AF120s. Great fans, though not as good as fans like the ones Noctua or NB makes (nor as expensive). I'd say given your parts list you should be fine at stock with them, but if you plan on overclocking you'll want to get more.
OP

GPU arrived today. Unfortunately I'm having issues with my backup rig, RAM slots went out, so I can't test to see if it works. Here it is: 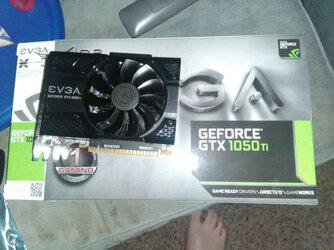 Good call on the ryzen jump.

The 1050ti will run everything just fine, it is about a gtx 780 in terms of performance, but i would recommend going vega or volta as your 1 year upgrade path, along with 16 Gigs of ram.

I'm seeing major fps loss for my rig in games because of the 8gig pool. Widows 10 eats up around 3.5 gigs, and that leaves only 4.5, which is eaten away by spotify, discord, ts, chrome, etc, and when that limit is pushed by a game, a dip of 8 to 20 fps occurs until some ram is released. Its causing trove in particular to crash every 5 to 20 minutes.
OP

That RAM is a single stick. Figured I'd save the ten dollars going for single channel versus dual so I could get the Gigabyte board. I'll buy a second of that stick later on.

I'm not upgrading the GPU any time soon. Maybe to a 1060, but Volta is unnecessary and AMD had stated Vega will only have high end cards. The only reason I see for going Volta is if I decide to bump up to 1440p and the budget offerings in the 1100 (or 2000?) Series cards are even more capable at doing that resolution than the 1060 is. I'm never gonna touch 4k, and I don't need 144FPS on Crisis 3, so a high end card is unnecessary for me. If anything I'll wait until the line of cards after Volta, or longer.

PSU will be here tomorrow, then I'm done until next paycheck. Hours sucked this pay period though so probably gonna have to wait until the check after. Next group of parts will be the case, the RAM, and the mouse. 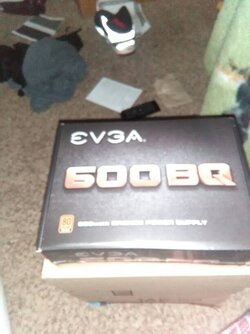 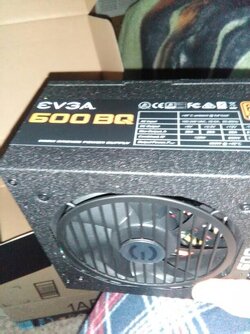 B
Not getting monitor signal on new PC