So I finalized the final hardware list to complete this build outside of the new CPU at release...

Also here is a teaser of some of the layout! 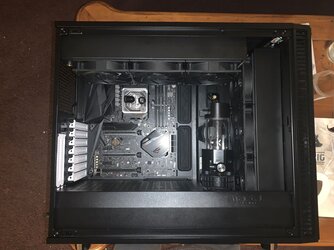 So having seen several reviews on the AMD Ryzen 3000 series in the last couple of days I decided to pull the trigger on the cheaper Ryzen 5 3600X. I made this decision based on reviews I saw showing the 3600 performing within less the 5% difference to the 3900X in almost all gaming benchmarks. There are obviously select gaming benchmarks where this is untrue, but for the majority of the reviews I've seen the 3600 overclocked to 4.3GHz all core performs on par in most cases (gaming) with the 3700X and 3900X aside for the few games that prefer more threads.

I felt the 3600X was a fair bet to getting a chip that I know will hit 4.3 GHz all core at minimum, perhaps 4.4 if I hit the silicon lottery.

I think that's a wise and educated decision. If I didn't need the additional cores I would be going the same route.
You must log in or register to reply here.