Welcome to the beginning.
I had made a thread in the water cooling section to ask some questions before diving in.
Now that it is set in stone that I'm going to do this build i figured i should jump on over to the build log section. This will be slow progress as i am getting parts as money becomes available; but i hope someone you come along for the ride with me.
To start this is my 4th pc i will have built and 1st that i will have water cooled. This will also be my first step into the intel side of things.
The case i will be building in is the Corsair carbide series spec-03. The case has already went under the knife to make some more room for activities I started by removing the 3.5 drive bays from the bottom and then the 5.25 bays from the top. That gave me a completely open front of the case for a thick radiator and room for the pump and res. 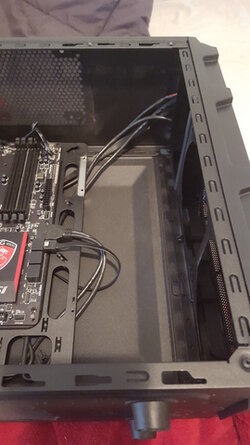 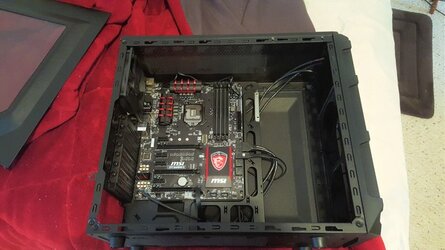 So then the next step i took was figuring out a mounting solution for storage. At the current moment it will have a 240gb ssd for booting and a couple gaming. I ordered a metal 2.5 to 3.5 bracket and cut off the left side of it off and drilled 2 holes to mount it on the mobo framing. I failed miserably at eyeballing it and my holes ended up about a full quarter inch off so its not straight... Ill probably order another one and fix it(ocd kicking in pretty bad) 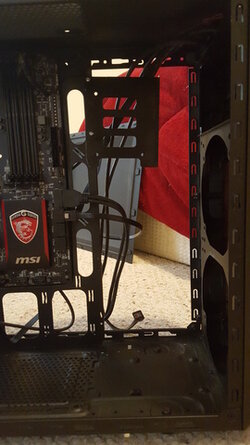 I have the pump, swiftech mcp655-b which is a D5 pump that I will be putting together with the ek XRES 100. That will be mounted to the front radiator with the ek uni mount.
the front radiator is in transit black ice sr1 120.2. That will have two nzxt performance 120mm fans mounted in push on the outside of the case between the framing and the front faceplate to give me more interior room.
the top radiator will be a slim 120.2. I am leaning towards the magicool 240 g2. For the excellent price it seems to be a decent performer for being so slim at only 27mm. For easier fitting routing I'll be doing the fans in pull for the top rad. Im leaning toward another pair on the nzxt performance fans or possibly the yate loon 120's is either low speed or medium since the cables wont hardly be seen after the use of a splitter.
I am doing compression fittings at 1/2 id 3/4 od and leaning towards the primochill LRT elegant white. The goal with the tube routing is to make all nearly straight runs so two 45's and four 90's will be used along with a couple extensions for some foreseen clearance issues with the first run from the pump to the front rad.

Sorry for the jumbled text. i tend to ramble even when typing. This will be a cpu only loop with the gpu hopefully in a year on the next major maintenance.
The motherboard is an msi z97 gaming 5.
The cpu will be an Intel Pentium g3258(i know this doesn't deserve a loop but its easier to swap a cpu than to redo all the cooling).
The gpu is the Evga GTX 970 SC swapping out from my 3rd build.
The psu is going to be a corsair RM series is either 750w or 850w depending on the deal i can get at the time of purchase.
Ram will be Hyper x fury in either a 2x4 or 2x8 configuration with a base speed of 1866.

This is where we will stop for now as I'm waiting on parts to come in and money to build up haha
till later everyone,
Stay frosty

Well small update, the 2 nzxt performance fans came in along with my tubing cutter. Now waiting on the rad to get here tomorrow. Picture update then hopefully
OP

well, little update.
the rad came in today. i thoroughly cleaned it out and installed it.

all went without a hitch for the actual install but I'm seeing an issue down the line.

the tubing for the run from the front rad to the cpu block will be going directly over the the 24 pin hookup on the motherboard. there isn't another way to do the runs without having tubing going in front of the gpu which I cant stand. so I went ahead and ordered the right angle 24 pin adapter from frozencpu. they sadly only had it in off the wall uv colors so i went with red to play off the the msi mobo. still not fully sure where ill run the cable with the ssd bracket being there as well. I'm learning quickly that this case does not have much room haha.

sadly this will be the last update for at least a couple weeks, waiting on tax return to get more loop parts and some essential hardware.

to the Funny Farm.

Looks like a nice start. You plan on benching that rig?

The rig will be my daily gamer. Just really love the benefits of a loop in respects to getting the most out of your equipment.
I've just began but man am I addicted haha

we all love a water build, don't worry about the crap that pops up we all cause those.
keep the pics coming!!!
of the 11 rigs I use now I think only one is air cooled, I even water cooled a rig that can't be clocked!!!!
come to think of it, I built my poor mother a dual core amd apu rig and put water in it""""
OP

Honestly haven't even really began this one and I am looking at my amd build mapping tubing routes lol...
OP

Well hopo fully everyone is well. Just got a foot of snow last night where I'm at haha. But the mail still came! I got all my fittings and 2 yate loon medium speed fans for my top rad.

I got 5 fittings and the 2 fans from performance pcs which was my first experience with them. Awesome packaging and only took 4 days to get it with the basic mail service so I'm extremely happy with that.
The 90° fittings I got, I got off of ebay. There was a seller with a listing for 10 90° rotary koolance fittings for $30. How could I even pass that up. And no, not used, brand new in the packaging!

all my glorious fittings I really wish koolance made 45 degree rotaries so everything could have matched. 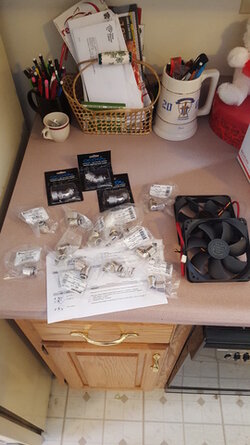 Well it's been a bit but a major, small update. I ended up switching cases. I went with the phanteks enthoo pro in black. First impression is this is an awesome case for the price. Tons of room but doesn't look empty once the motherboard is in there. The 240 rad is mounted in the front with a pair of yate loon medium speed fans. And a 360 rad should be here Monday to be paired with 3 nzxt performance fans. I'm extremely excited for where this project is headed and just hope to have it together sooner than later haha
You must log in or register to reply here.