Quieting down my watercooling setup

It's been years since I've posted here, build my own setups and everything, but last year I build a system which isn't build for overclocking but for having a cool system with watercooling.
No more DIY, just plain AIO watercooling solutions.

But, I don't like the sound levels. I want those down to near silent. And I think it should be possible, and I think with some simple tweaks I should be able to do that.
And that's what bring me here. Asking people to help me think about the situation.

Main setup specs:
Case: Corsair Carbide Series Air 540 (The silver one with the window. No option for a closed one sadly)
Cooling: NZXT Kraken X61 for both the CPU and GPU (with Kraken G10)
Fans: The ones that came with the NZXT Kraken X61.

My main issue is that NZXT wants the fans to blow out instead of in.
But the back fan is also sucking air out, so that can't be right?

The software to setup the Krakens is configured to be quiet, not performance.
But I still hear a lot of air placement noise.

I will post a photo later on how things look at the moment. I'm at work right now.
But if anyone has a general idea how to make this setup quieter, that would be awesome.
Open for discussion of course.

A simple solution is to get new fans. Im personally not sure what 140mm fans are good so someone else will have to help there.

As far as air flow, you should have front/sides = intake and top/rear =exhaust for proper airFLOW. Your CPU temps may go up a 1-2C or so with that configuration as you are using slightly heated case air instead of ambient, however the internals in your system will be better for it due to airFLOW. Since you are not overclocking you will have PLENTY of headroom temperature wise.
OP

CPU and GPU temps are very low already. Never heard about top doing exhaust. Thought that was intake as well, and just the back doing exhaust.
Guess that changed over the years

I checked the fans before installing, comparing them to Noctua for example. The NZXT ones are so low on noise it felt price wise not justifiable to change them.
But I might have to check again.

With that in mind, what would noise wise be better? Fans screwed in the case, then radiator behind it, or radiator screwed to the case and fans behind that? And how will it affect cooling? Push through vs pull through.
In the past I had push/pull setups with huge heatercores and 1/2" hoses. Bit different to this "simple" AIO.

Im not sure if push or pull is better on sound, honestly. I would guess push would be quieter due to the radiator 'deadening' the sound, but, I wouldn't bet the farm on it either, LOL!

Push v Pull depends on the radiator IIRC, but, again, you will have a ton of thermal headroom so the minor differences it does make, won't break the bank.
OP

That's what I was thinking.
Was looking at the Noctua NF-P14s redux-1200 PWM.
They look low on noise levels, and the colour matches the case better then the black with white blades from the NZXT fans.
Not that I will really see them, but my mind does...

Have you looked at the Darkside GT fans? Also to look for are Noiseblockers eloop B12s and EK Vardars.
OP

Looked them up, but seems I can't order any of that here in NL.
Not that I could find easily anyway. Ordering from the US means import crap.

Just ordered five of those Noctua fans to replace the ones in my case. See if that helps.

Also had a look how I build it (been a while). I have the radiator screwed to the case, and the fans on the inside.
Necessity because of clearance for tubing of both radiators.

Usually fans produce a quieter sound when used in push. Reason being is that in pull, the radiator acts as a disruptor to airflow. As the air enters the fan it creates more noise due to non laminar airflow hitting the blades.

This is quite noticeable on the Noiseblocker eLoop fans [due to their unique blade design] where even the manufacturer advises against using these fans in pull mode.

I have just been trialing the Phantek PH-F140MP fans in my new build. While my build is not complete, I have mounted 8 of these fans [push/pull config] on one of my rads for noise testing and have been impressed so far.
OP

That makes sense to me about the pull config noise.
Problem for me is that the tubing on both radiators are so close together right now, I can't put the fan on the case side, making it push through the radiator.
The tube connections on the radiators will interfere then. It's a very tight spot, and could barely get it in as it is.
I will try to put up a photo tonight.

The Phantek fans I can order here, but it seems they aren't in stock in the places I can buy them.
Hoping to get the Noctua's tomorrow. Seems I ordered a bit late last night, so they haven't picked them for shipping yet :-(
OP

The fans are in. Now to find the time, hopefully tomorrow evening.
OP

Got the fans installed and the system is a lot quieter now.
Can still hear it running, but just less noise wise. And it wasn't like I had a tornado in my house before

Took some pictures to illustrate how it was before, and how it's now.

Before switching fans. Front and Top sucking in, only rear blowing out.
Very tight in the top right corner. 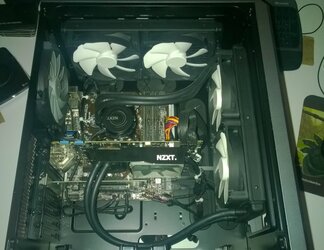 And how it's now. Front fans screwed on the outside (didn't know before there was enough room, which is barely).
Front sucking in, top and rear blowing out of the case.
And more toom in the top right corner, so the fan isn't pushing on the tubes anymore. 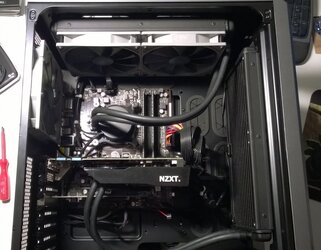 Just a photo to show the front before sliding the grill on. 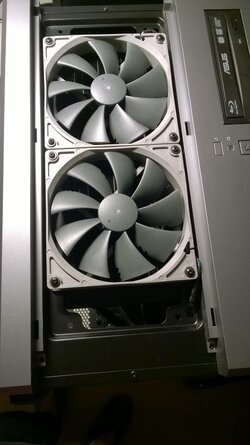 And the CAM software showing some temps and stuff.
This is during Idle with no other programs running.
Oddly enough with 20% CPU usage from three Edge tabs it's at 34C CPU temp right now. 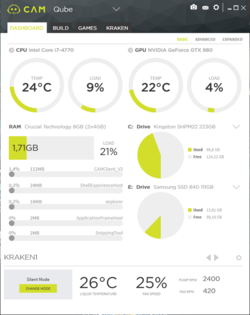 Well it's time to load it up with Prime 95 Blend and Furmark at the same time with the current fans you have for max temps. Post back when you record idle temps on the PC and room temps, then 30 min of stress and room temps. Then you will really know.
OP

Might do that some day. Not too interested in that anymore.
Used to do that when I was overclocking my systems with air, Peltier, freon, etc.

Looks good Fresh. Glad it all worked out.

Thanks
You must log in or register to reply here.