Race to page one

All of a sudden hshtick fires up his rig and starts putting out 600 000 PPD.

It's going to be close but I think I can just make it to page one before he passes me.

Waterblock is on the way for the 980ti so maybe I can get a few more PPD.

Another 10 million points to go until the front page.

Soulcatcher. I see that you just earned your 30 mil as you posted above and that you moved up 6 spots this week. You have great momentum on your side.

hshtick is closer than 20 spots from you and moved 8 spots this week.

Welcome back to the fold and welcome to the forums.

You guys are earning about the same ppd and a run of good/bad WU's could change this race from update to update, day to day. This really will be a good race for now and any other milestones coming up.

Keep up the fold guys.

Man I just mad it to the front page earlier this week and im already worried about being bumped off, I see you both in my takeover

slaytalera said:
Man I just mad it to the front page earlier this week and im already worried about being bumped off, I see you both in my takeover

slaytalera said:
Man I just mad it to the front page earlier this week and im already worried about being bumped off, I see you both in my takeover

Yep, just put you in the weekly newsletter for reaching the top 100. Congrats! Now get back to work.
H

oops, fired up an older machine the other day to see if I can eek out few more PPD. It crashed and took my whole network down for half a day

Lost some time but back in business now. Thinking I still have a chance to pass Soulcatcher. Gonna be close.

im right on your heals to take the front page. im coming to get you both.

You guys do realize I was quite happy being unchallenged right?

This is an awesome race. WOOT!
OP 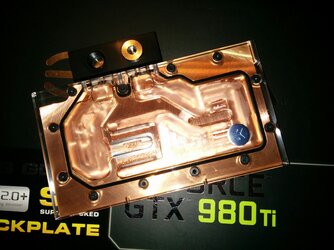 Waterblock installed and max overclock achieved. It's all I can do to hold off you vultures....

Soulcatcher668 said:
Waterblock installed and max overclock achieved. It's all I can do to hold off you vultures....

What ppd are you getting now with the card vs before the water block.
OP

It will take a few days to figure that out and I will let you know.

This is not a dedicated folding rig though. I would say that I could previously count on 450,000 to 500,000 PPD under my normal usage.

It goes way down on the weekend because my son and I both game on this machine as well.

Hopefully it is enough to get to page one first.
You must log in or register to reply here.

Thank you for attending this meeting that I called.
2