There is no read performance increase with raid 1. This raid option is for redundancy. So if you have one of two drives fail, you can still operate from the mirrored working drive.

However if your looking for a faster performance, but sacrifice redundancy and loss of data if one drive fails, you'd want raid 0. This will double the read speed for all programs and data on the raid.

With a decent set of SSD's, you won't worry to terribly much about redundancy or loss of a drive. Since SSDs have no moving parts, the are already pretty much worry free when it comes to failure.

ShrimpBrime said:
With a decent set of SSD's, you won't worry to terribly much about redundancy or loss of a drive. Since SSDs have no moving parts, the are already pretty much worry free when it comes to failure.
Click to expand...

Yeah, but when they fail, it's one step past 'oopsie'. Some type of redundancy and scheduled backup has always worked out to be a better plan.

Supposedly HDDs benefit from RAID1 by reading the data from the first drive from which it is available. Remember that an HDD has to wait for the platter to come around to the desired sector. If the first read is part of sequential string of reads, there would be no additional benefit for subsequent reads. I don't know if RAID controllers or S/W performs any optimization beyond that.

With an SSD it would seem to make sense to distribute reads between drives but again I do not know if that is done.
Last edited: Apr 16, 2016

I googled it and found this http://www.tomshardware.com/forum/250390-32-does-raid-increase-read-speed

RAID1 can be just as fast as RAID0 as for reading, because it could read in the very same way as RAID0's do. Better yet, since all disks contain all data, there is no requirement anymore to read from a specific disk; as both disks contain the same data striping can be done more efficiently.

So, RAID1 should be faster than RAID0 for random read, and at least the same as for sequential read. Unfortunately, only UNIX RAID drivers like geom_mirror implement things like load balancing and round robin algoritms on the RAID1 layer.

Even Areca hardware RAID doesn't profit alot from RAID1. And all onboard-RAID do not employ any optimizations for RAID1, causing it to slowdown to the speed of a single disk. Perhaps Intel ICHxR drivers will be a little better, but i doubt they can profit from RAID1 potential as the GEOM storage layer does in the FreeBSD operating system.

So short answer: no, Windows does not offer any advanced storage technology, like Linux/BSD do.
Click to expand...

On newer gear, and mid tier dedicated controllers I've found RAID 1 to be pretty much identical to a single drive. Any performance improvements I've found with RAID 1 in this respect seem to be transient and due to cacheing of the controller -vs- sustained throughput. If the controller / RAID card is doing it's job drive mirroring over-head should be within a few percent of a single drive. I'm talking real world tests like SQL, etc.

What's weird is that RAID 5 used to be a lot quicker than RAID 1 when it came to read speed. As HD density has increased and controller logic has improved this disaprity has narrowed quite a bit. I still an occasional Server 2003 in the field with the old skool RAID 1/5 set-up, but never for newer machines.
Click to expand...

So the consensus would be that it won't be worse... but if it's any better it won't be by much. If you're thinking of mirroring in the first place, that would make me think a stripe is out of the question.

If four drives is an option, you can do a 1 + 0. Have a stripe, that mirrors on to another stripe.

RAID 01, also called RAID 0+1, is a RAID level using a mirror of stripes, achieving both replication and sharing of data between disks.[3] The usable capacity of a RAID 01 array is the same as in a RAID 1 array made of the same drives, in which one half of the drives is used to mirror the other half. (N/2) \cdot S_{\mathrm{min}}, where N is the total number of drives and S_{\mathrm{min}} is the capacity of the smallest drive in the array.[4]

At least four disks are required in a standard RAID 01 configuration, but larger arrays are also used.
Click to expand... 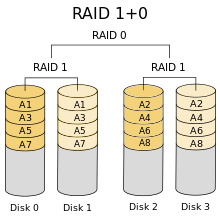 https://en.wikipedia.org/wiki/Nested_RAID_levels
Last edited: Apr 16, 2016
You must log in or register to reply here.

does Windows benefit from RAID-5?