After much testing today, I got some interesting results. But first, some background. Previous testing has shown Prime95 can be significantly affected not only by the nominal ram speed, but also the ram rank. This isn't often discussed or even specified when selling it. My thinking was, does this also affect gaming? This isn't my first attempt at this, and previous attempts with Witcher 3 and Doom were inconclusive. Today I tried the GTA V built in benchmark which gave a more complex answer than I was expecting.

GTA V was originally installed on a hard disk, but it seemed the benchmark loaded stuff as it went along so I moved it to the SSD to reduce the impact. It was a new install with default settings, and all I changed on the graphics settings was to enable fullscreen at 1080p 144Hz, DX11, VSync off. Everything was default. The built in benchmark was run twice for each setting, and the maximum of the two average fps results were used above.

Ram was tested at two speed/timings.

For the results, I labelled it as ram speed, the number of channels, and the total rank per channel. The channels and rank per channel were manipulated by using two sticks in different positions. For two channels two rank, this required all 4 modules to be fitted. For two channels one rank, modules were in slots 2 and 4. For one channel two rank, modules were in slots 3 and 4. The ram modules are 1R each, although 2R modules are also available.

Prime95 results were also obtained as I went along to check my previous findings. I used version 28.10 set to run a custom benchmark at 1024k FFT only. The presented result is the iter/s divided by 6 to make it fit a similar scale to the GTA V fps values. 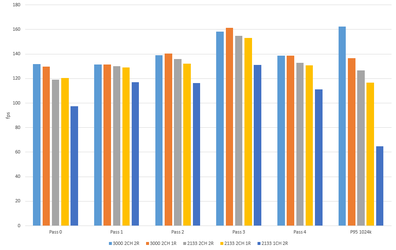 The benchmark gives results for five passes (0 to 4) with some variation between them. It is clear the 3000 2 channel results are higher than the 2133 2 channel results which is to be expected. Pass 0 seems to give the biggest difference, and pass 1 shows the smallest.

What about rank? Harder to say. At 3000, 2R is faster in one pass, slower in two and about the same in two. At 2133, 2R is faster in 4 and slower in 1. I would hesitate to say if there is something there, and further testing to understand the degree of variation in the benchmarks is needed. I would speculate that at the slower 2133 speed, this may make more of a contribution than at 3000, where other factors may dominate.

There is also a single channel test thrown in at the end, and that is clearly below the others.

And finally, the Prime95 results are in the order I expect, but the relative spacing between the 1R and 2R at each speed isn't consistent, so maybe there's still further investigation needed there.

I don't believe the ram quantity to be significant but I don't have an easy way to isolate its effect.

In conclusion, I don't think I've shown a significant difference due to rank which was my main objective in doing this, but it does show differences in ram speed and channels.

That might change the consensus saying "RAM speed impact on FPS is marginal"...

It was 11% for 2R, 8% for 1R. I got a bit tiered by the point of posting so I didn't attempt more in depth comparisons between them. Numbers below if anyone wants to attempt doing something with it, as well as the listing of settings used in the benchmark. Again, it was whatever it defaulted so. No doubt someone somewhere will take objection to something in there...

That might change the consensus saying "RAM speed impact on FPS is marginal"...

There was always, at least for those that know, an "*". It is well known some games respond well to higher ram speeds, some don't at all. Most fall into the don't at all or minimal gains category.

Anyway, great testing Mack!
You must log in or register to reply here.

need an advice on new ram